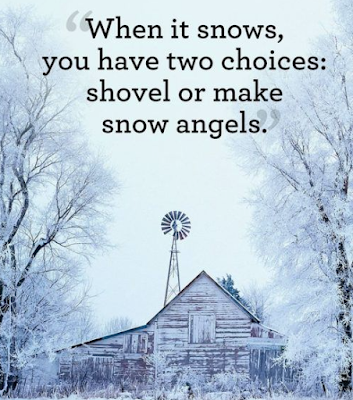 "Snowflakes are one of God's most fragile creations--but look what they can do when they stick together!" ~ Vesta M. Kelly

Now I know that many of you who read this blog live in regions where it does not snow. Those of us who do have to put up with sleet, ice, snow -- digging out after many inches or feet of snow, scraping ice off of car windows, and just being tired of being cold understand what I mean by the "January Doldrums." Add to that the fear of Covid and the stress of waiting our turns for vaccinations, well...doldrums indeed.

Something that has helped greatly around our house of course is the Lhasas. They are happy, love plowing their noses through the snow, and always ready to cuddle and give kisses. I am in the midst of training Emmy and she is doing well with stacking on the table and walking on a show lead. She is getting very full of herself with all the praise and treats she receives. Unless the show in Des Moines, IA in February is cancelled, Emmy will be going along to participate in the Beginner Puppy Competition (for puppies 4 - 6 months old only). Archie and Millie are entered also and I am looking forward to getting back in the show ring, even if we entered only one day, thinking one day is sufficient for the dogs to get back in the grove.

Here are the latest photos of Emmy - obviously not well groomed - but she is rather a tomboy! She is 3.5 months old now. 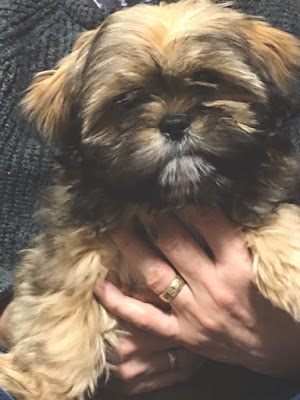 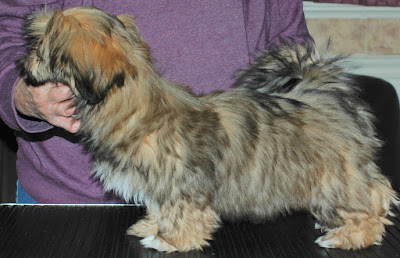 We have new puppies! Puppies at last!! Josh and Bekka puppies were born on January 20 and are now a couple days older that one week. There are two boys and two girls in the litter. All are growing like weeds and doing very well.

I know many of you are waiting to hear that we have a puppy for you, but these have already been spoken for.

When might we have another litter? Well, the hope is that two of the girls will be in season and ready to breed by the end of March/early April. If that is the case, about 2 months later we should have puppies being born.

Actually, I am now experiencing what puppy purchasing is like from a different point of view. The last time we bought a male puppy to "bring in some new bloodlines" to complement our own, was 16 years ago when we bought Connor, who is still with us, but definitely showing his advanced age. He came to us as a young puppy, eventually becoming known as CH San-Dhi Joyslyn Icon. Now we are eagerly awaiting the addition of a young male, not yet named, who will join us next week. I am sure that Miss Emmy will be thrilled to have someone nearer her age to play with.

Here is Connor the day he finished his championship. 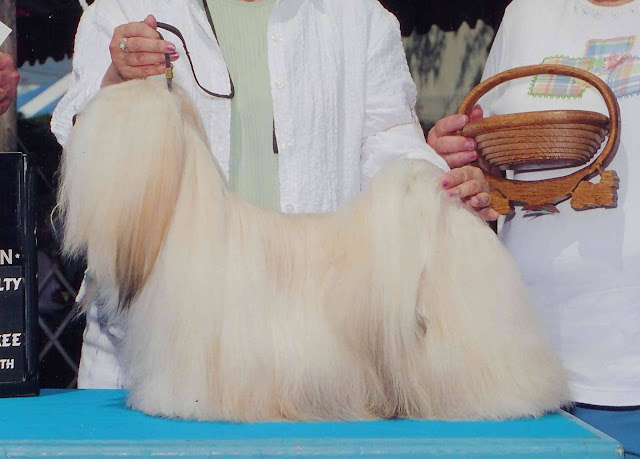 Anyway, I am now going through all the anxiety, joy, and anticipation that my own puppy buyers go through as the days go by and eagerness to have the new one at home at last grows stronger.

I am always happy when I get emails and photos from our puppy buyers. I love sharing them with you all and, from the comments I have received, it seems like many of you enjoy seeing them also.

From Celina: "...my mother and I got Dora from you last month. I just wanted to tell you that we registered her with the AKC a few weeks ago and she is doing great. Now sure if my mom kept you updated, but she is a great little dog and so loving and sweet...She also learned to bark a few weeks ago and is talking more and more. It is actually lovely to have a girl for a change. We never thought we would like a girl dog as we have always had boys, but she is amazing. She is feminine, but still very feisty and fearless. In addition to being a cutie, she is a very loving dog and even my grandmother loves her. I think knows she knows my grandmother is older so she doesn’t move as much when she holds her."

Terry wrote about Dora and Emmy's brother, Rudy: "I am delighted.  He has such an adorable face an expression.  I don't like to leave him to go to work."

Julie sent this photo of Jenna wearing her cone. She had been spayed. 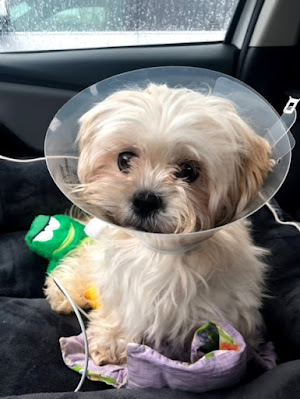 Kassia also sent photos after Leeloo was spayed. She wrote, "'No jumping" said the vet... "keep her quiet"for a week so her stitches can heal... day 5..  I walked in on her having just had breakfast...she had decided she wanted to see out of the window!! This dog cracks me up.. she's a laugh a minute!"

Molly Anne has Luna, who is the mother of Bekka. She wrote, "The resemblance between Bekka  and her mother is truly amazing. I also realized that in the pictures you have seen of Luna she looks a bit well, scruffy. In both defense and retrospect, I generally take her picture when we are out and about.

She has a habit that amuses me, and which I presume was a necessarily learned response. While walking, should a leaf or twig become entangled in her “drawers” she instantly becomes a statue--Medusa could do no better--until I dutifully find and remove the offender. When I say “ all clear” she brightly trots off again."
Kathleen wrote about Beau: "Thought you might like to see how Beau has grown. If there were a contest for best temperament he would get first price.  He continues to be a lover and my shadow. He has been the perfect antidote to the isolation of the virus. I hope you are well and thank you again for the gift of my perfect Lhasa." 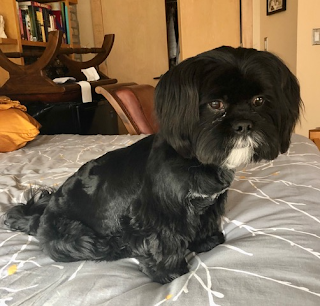 Linda did not send a photo but wrote about her Daisy, (Emmy's sister): "I haven't had much time to get on my computer. Daisy follows me everywhere, gets into everything. Gracie has been afraid of Daisy since she got here. Daisy hides behind furniture etc. and jumps out at Gracie and bites her and chases her, Gracie growls and snaps but Daisy just continues. I spend a lot of time refereeing. Daisy has been showing her Lhasa smarts, she diffidently knows her name, comes when she 's called., is learning a lot words. Does Emmy chase her tail?  She loves to run at full speed through out the house. She just likes to have fun.!"
Speaking of Daisy, here are a couple photos Jim and Cristina sent of their Daisy. They wrote, "Daisy has been doing great. She loves lazy weekends when she can cuddle in bed with us and take naps; and she love playing with her toys. She’s especially into her balls; she doesn’t like fetch as much as she like playing “goalie”, where she blocks the ball after I kick it toward her. She’s also a very vocal dog and has a great internal clock (she knows when it’s time for her evening treat). She’s the funniest and sweetest dog." 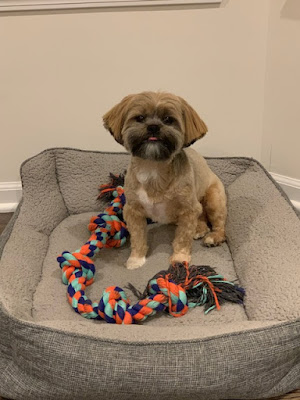 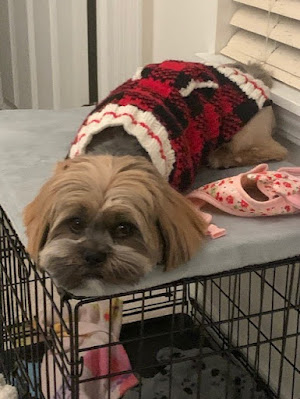 Okay...at this point, an error occurred. Bummer!
I had to start a new post.
And...later I figured out what went wrong but I am too irked right now to go back and combine Part 2 with this post, so I am leaving it in two sections!
Posted by Joyce at 8:31 AM