New Puppy Pictures and Some Updates 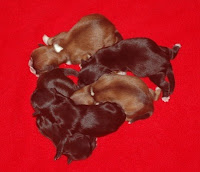 Although I am still "fence sitting," a friend has 99% talked me out of letting Desi go. Another friend mentioned that I should buy some Bitter Apple Shampoo to deter Desi's coat chewing, but I have not been able to find the product so assume it has been discontinued from the Bitter Apple line.

Movements toward anti-dog legislation continue across the country, and I encourage all of you to educate yourselves on the issue since it impacts both breeders AND pet owners. Breed specific legislation is rampant. Right now the targets seem to be "pit bull-type breeds" so those of us who love and own dogs that are not that "type" have nothing to fear, right? Which breed(s) will be next? Where will your pets come from when all the breeders are gone? If your breed is targeted, will you move or will you put your beloved pet in an shelter to be euthanized since no one in your town/region will be able to adopt him? If you are new to this blog, please read the Tuesday, August 10th posting.

You should all take some time to read "A Case for Purebred Dogs from a Different Perspective:" http://knobnotes.blogspot.com/2010/10/case-for-purebred-dogs-from-different.html
Let me know what you think.

Walker and I attended three of the four shows in Springfield, IL this weekend. He was happy to have all of my attention and showed quite well. We did not place in the Group either Friday or Sunday, but did place third on Saturday. I'll post his photo later.

This is a sad week for me as I go about my usual routine when I long to be in Vancouver, WA at the American Lhasa Apso Club's national specialty.

This will be quick. I wanted to let everyone know that Mira's puppies were born yesterday afternoon. She has 5 puppies: two gold girls, two black girls, and a black boy. Everyone is nursing well and doing just fine. We'll try to get some pictures posted soon.

A Difficult and (Yes) Heartbreaking Decision 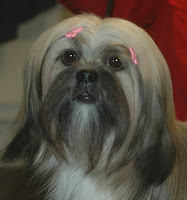 The July 7th entry of this blog featured my article based on Robert Fulgum's Everything I Really Need to Know I Learned in Kindergarten. One of the lessons Fulgum listed was "FLUSH" and I related it to dog showing and breeding by saying, "Face it, there are times when it's necessary to regroup, rethink, evaluate, and call it quits whether it means deciding that wonderful litter really isn't so wonderful after all, not showing a Lhasa you had your heart set on being your next champion, or scrapping an entire breeding program that just isn't working out. You get past the mistakes and get on with reaching your goals."

Or in the immortal words of Popeye: "That's all I can stands, I can't stands no more!"

You get the idea!

Last night after grooming Desi, I decided to face the fact that as cute as she is, as pretty as she moves, as great as her coat texture is, and as much as I want to show her to her championship, Desi's coat is a lost cause and I don't think I am ready for the heartbreak and challenge of trying to get her to stop sabotaging herself by chewing her coat. Years ago our dog Tessa did the same thing and every time I had it grown out and ready for her to go back into the ring, she'd sure enough chew off her rear skirts. I do not want to go through that again.

Right now Desi's coat is looking good because, as an experiment, I put an E-collar on her. She doesn't mind it and it certainly keeps her from chewing her coat. BUT she can't live in the thing forever! When I finished grooming her last night, I let her run around the family room to play. Shortly thereafter, Lynn had to groom Zach so he put Desi in her 2x3 since her running around was totally distracting Zach from lying down to be groomed. Zach was more interested in playing with Desi than with being groomed, of course! (First things first, Zach.) When I went to get Desi from her 2x3 to put her E-collar back on, low and behold, she had used those 10 minutes to chew herself. One back foot and both front legs were totally wet!

Thus, Desi will be for sale to a pet home. If you know anyone who'd be interested in an smart, adorable little Lhasa girl with a sweet, playful disposition and a sense of humor who likes to chew her coat, have that person give me a call. Her last photo, taken before she decided to shorten the hair on her chest and front legs, is at the top of the September 30th post. That pretty face remains the same!

Life is good when you have a Lhasa to love you...in spite of the fact that some of them are downright frustrating! 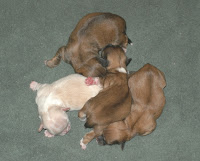 Breaker and Dancer's puppies were born Saturday night/Sunday morning. Once the first puppy was born (it seemed to take forever and I was getting worried), things went more smoothly. The first puppy was born about 10:30 PM and the last at 1:15 AM. The litter of two boys and two girls is pictured above. The photo was taken this AM, so they are "not quite" two days old. So far, all is well with both Dancer and the babies.

As you can see, we have one female that -- for us -- is a very unusual color! Most of our puppies are born brown and then lighten up to some shade of gold or cream as they reach adulthood. This little gal started life as a cream! I'll be interested to watch what happens with her color.

I'll be posting weekly pictures on this blog so you can follow the puppies as they grow.

The next posting will probably have news about Mira's litter. When it rains, it pours! But after not having puppies since last November, I'm ready for the challenge.

I have a lot of catching up to do. These past two weeks have been busy getting ready for and going to shows. The Rockford-Freeport Kennel Club shows were held in Freeport on the 2nd and 3rd . I took Zach and Belle. Zach was entered in the 9-12 puppy dog class and took Winners Dog both days for two points each day. Belle did not fare so well. She did not show well on Saturday and took 3rd in her class of 4. Sunday she improved her showing performance 100%, yet still took 4th place.

I attribute Belle's improved performance on Sunday to the fact that I asked my friend Jane to show Zach so I could focus on Belle. Belle never gets all my attention since I am usually fussing with Zach or Desi before they go in the ring since the classes for their age group come first. Then I hurry out of the ring, change armbands, and swoop Belle off the ringside table to rush back in the ring for her class. She doesn't appreciate all that hurrying and swooping! Sunday she was a totally different dog performance-wise. I was disappointed to take last place but very pleased with her performance. Perhaps there is hope…

This past weekend we were in Morris at the Stone City Kennel Club shows. The weather was wonderful for a show, especially one where we had to groom outside in stalls. (Oh the glamour of dog showing!) Thank goodness that the previous weekend in Freeport we were able to find a grooming space inside, out of the cold wind. Temps there were 39 when we arrived and 53 when we left. The 80-plus temps this past weekend were wonderful in comparison!

Zach's wins in Morris gave him all the single points (9) he needs toward his championship. Now comes the more difficult part – finding shows with major points. To earn a championship, a dog must win 15 points. Two of the 15 must be what are referred to as "major wins." A major win is a win of 3, 4, or 5 points at one show. Five points is the most a dog can win at a single show. Points are determined by the number of dogs of each sex entered in each the breed. In Illinois, it takes only 4 male Lhasas for a 3-point major. We need 7 females to make a 3-point major. Sadly, there are so few Lhasas around any more that we can rarely come up with even such a low number of males at one show.

The next shows are in a couple of weeks. I am taking Walker to three of the four shows in Springfield, Illinois. Walker will enjoy my full attention and I plan to enjoy these shows. They are so close to where I live and, due to the October scheduling of our national Lhasa Apso specialty each year, I have not been able to attend the Springfield shows for years and years! This year I cannot attend our specialty, which really makes me sad, so I decided to cheer myself up by entering these shows.

Sometime this week Dancer will have puppies. I am excited about this litter and praying all goes well with the whelping. I'll let you all know what she has! The photos at the top are of Dancer as a 4-month old and a 14-month old.