Puppy Photos and News from Others

Already this week I have driven miles and miles, first to Clear Lake, IA, to meet a friend and return her dog, then to Galena, IL, to go to a work-related meeting.

If you have never been to Galena, you should add it to your Bucket List. Pass through the flood gates and you are on a street that is lined with about 100 stores selling all kinds of things. The Galena River, now more of a creek, used to be a waterway for steamboats and the town with booming with water traffic. For history buffs, this is a great town to visit. (Home of Ulysses Grant, for example.) For shoppers, it's a paradise!

Anyway, walking down the sidewalk and doing some window shopping while waiting for my meeting to start, I stopped in front of a store called New Earth Animals. Intrigued, I went inside and found all kinds of things for dogs, cats, and the people who love them.

I found a coaster that made me laugh out loud because it is so true. So I bought one for myself "Dog Mom" and another for my husband "Dog Dad" because of what was written on them. 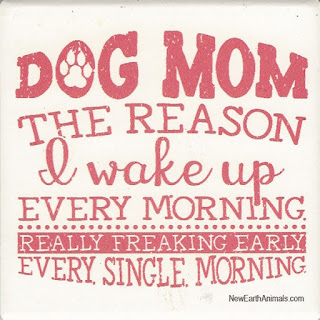 For us "Really Freaking Early" is 5 AM.

Maybe some day when we are fully retired we can finally teach the dogs what a "reasonable hour" is.

Little Millie is the only one left here from her litter. She keeps occupied playing with the puppies from the younger litter. We hope that she will become one of our show dogs. She certainly appears to have what it takes.

The following photos are of the younger litter, almost 8 weeks old.

Their new owners are eagerly awaiting  the day when they can finally come to get their puppies.

And here is a picture of Winter with an attempt to put her hair in a topknot to get it out of her eyes. It did not work! Winter will be 5 months old on July 4th.

Violet sent a photo of Shadow with a blanket that I made for him when he was a baby. She wrote that he loves that blanket and carries it around with him frequently so he can lounge on it. 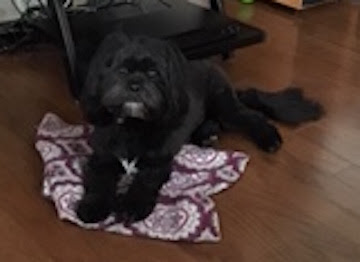 Sally sent four cute photos of her Ginger. Here is one of them. 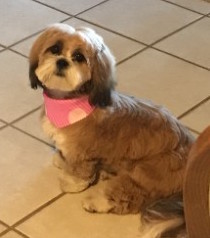 Sandi sent a photo of Stone after he'd been to visit his groomer. 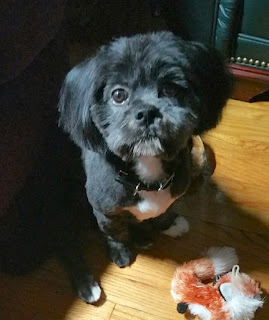 Kathy wrote about Jampa: "We are thrilled with Jampa!  Still a ways to go with house breaking, but that is progressing well.  I'll probably start him in puppy classes this week or next.  Wherever we take him, he walks up to (almost) anyone he sees for attention.  People all ooh and aah over him.  Everyone has been polite, asks to pet him, and sometimes to pick him up and hold him.  Jampa takes it all in stride and seems to enjoy all the attention he can get.

Renee sent a note saying her two Joyslyn's Lhasas (Jet and Dalai) traveled well to Carcassone, France, with her. She sent this photo. What a beautiful setting for a photo. 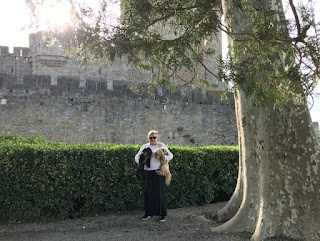 Dianne and her daughter had a long drive here due to a GPS that decided to take them on a late night "scenic route" trip -- two lane roads and DIRT roads! They made it here and back and sent a photo of Xena playing in her new yard. Dianne has some chickens and Xena is curious about the noises they make. 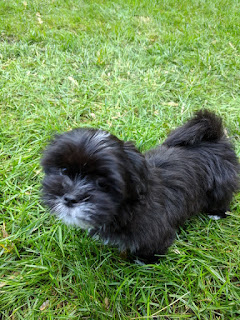 Jan wrote about Pebbles (formerly known as Gracie): "Just wanted to give you a heads up on how Pebbles did yesterday and last night.....She slept almost all the way home without any problems. And last night she went to bed with no problems. She only woke up twice... Potty is going about normal for a new puppy and in a new place.. Three times on the paper, and twice without paper(on the floor). LOL How can three and a half pounds steal your heart so FAST..  Thank you so much for letting us be a part of the WONDERFUL Lhasa world again." 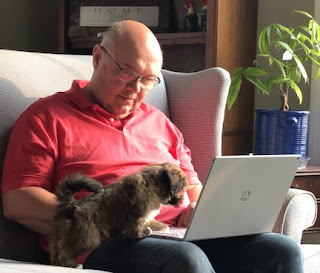 Judy wrote about Gus: "Gus is the most fabulous Lhasa Apso EVER. ...Gus is fearless. After the first day here (Thursday), I have allowed him out of his yard into the larger fenced yard, under my immediate supervision, of course. Gus has been following the Girls around, especially Raven. It has been fun watching Gus as he tackles a new challenge - getting up and down from the concrete sidewalk, finding his way in and out of the gate to his yard, improving his perception of length necessary for a successful "landing" from the sidewalk to the sand. Also, perception leaping UP onto the sidewalk. He had a couple of major crash and burns, where he fell short collided a bit with the sidewalk. Now he can stand next to the sidewalk and take a short leap up - where previously, when not trying to fly, he climbed up one foot at a time. He is building up lots of muscle and endurance as he races around the big yard. Last night Gus was running the Lhasa 500, or Lhasa Zoomies. He was having so much fun! Long twigs are interesting and he carries them around, very proud of himself..." 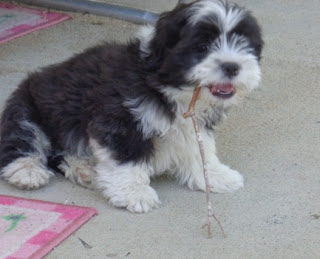 I think that's it! My apologies if I missed some one's photo. I appreciate them all so much! Keep them coming and I'll try to keep better track of them! 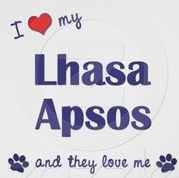 Pictures of  the Nine-Week-Old Litter

The Josh and Bekka litter are looking great. I think they are tired of cooperating (or not!) to have their pictures taken.
Not to be outdone in "squirmyness" and not wanting to look at the camera, the Breaker and Onyx puppies tried their best to compete with the older litter for being uncooperative this week!

Here are the best efforts!

I hope you enjoyed the photos. If you are interested in the puppies, we have 2 of the females left from the Breaker x Onyx litter and one (Xena) left from the Josh x Bekka litter. Xena's potential owners' son had a medical emergency, and they decided (rightly so!) this was not a good time to get a puppy. 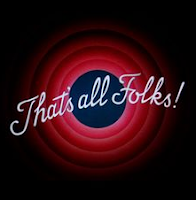