Updates and a Few Photos 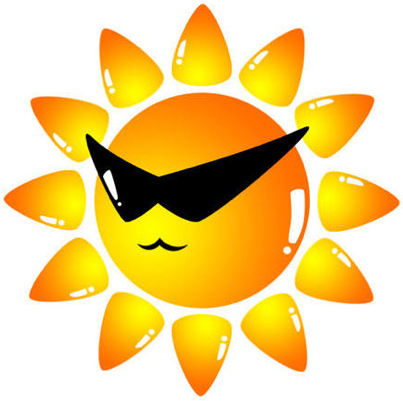 What is one to say about June, the time of perfect young summer, the fulfillment of the promise of the earlier months, and with as yet, no sign to remind one that its freest young beauty will ever fade.~ Gertrude Jekyll

Summer is upon us. It happened so quickly here. One day the furnace was running and the next thing I know, the air conditioner was on. That's what I get for having the thermostat set on "Auto!"

I am still waiting on the photo from the show where Duncan earned his championship. This particular photographer takes multiple photos then posts them online so a person can choose for herself which one looks best of the dog. I appreciate that. However, getting the photos after they are ordered takes ages...more than three weeks.  So, we wait....

Because Duncan finished on May 11, I moved him from the Bred-By Exhibitor class to the Best of Breed class for the four shows over Memorial Day weekend in Bloomington, IL. He did "okay," taking Select Dog for three of the four shows. In the ring on Saturday, he decided he'd rather play than stand still. So he scooted away from me when I reached to stack him, got down in a play bow, started patting his feet on the floor to invite me to play. When I finally did convince him to come near me, he grabbed my jacket sleeve and gave it a shake. What a dickens! Luckily, we were at the head of the line so all this was going on while the judge was attending to the other exhibits. I managed to get Duncan back in some semblance of "show dog" before the judge was done. And, yes, people outside the ring were laughing at me!

Saturday was a great day for Josh. Josh had turned 4 months old on the 16th of May, so he was eligible to enter the club's 4-6 Beginner Puppy Competition. He showed like a dream -- and he won the Non-Sporting Group. Then he showed again in the Best Beginner Puppy in Show Competition. (Alas, the Pomeranian puppy won!)

Here is Josh and his first place Non-Sporting Group ribbon. 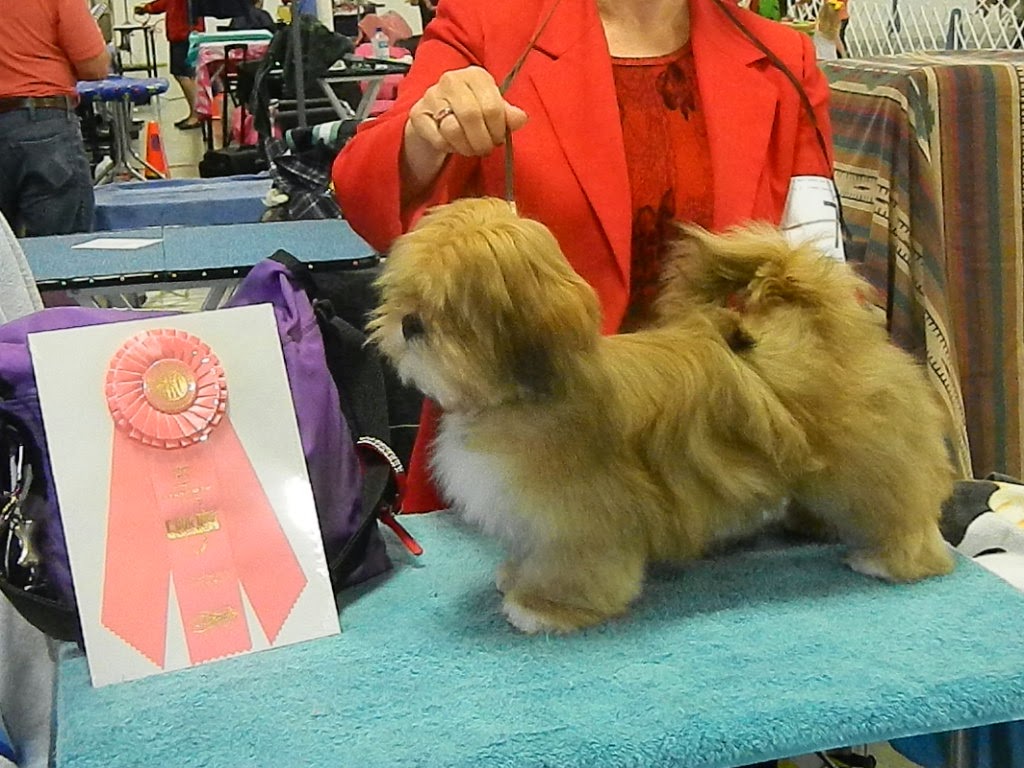 Here is Josh on the table for exam in the Best in Show competition. 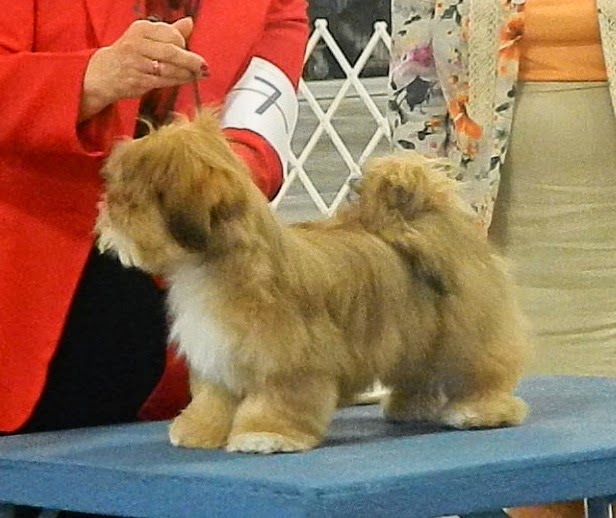 And here is a video of him.

So, all in all Saturday was an exciting day. Special thanks to Karen Schlais for the photos of Josh.

From Lucky's owners: "Lucky/Flash had a big day---running, playing, barking and doing what he does best - constantly moving. He doesn’t slow down.  He loves to play. It doesn’t show up too well in the photos but our friend is growing white hair down his back. Hopefully it doesn’t grow in too well or he could be mistaken for a skunk. Of all the toys he has chewed up , the Bunny with the plastic bottle inside (the one that you gave to him) is still around, in good shape and he plays with it weekly - not chewing it up. All the success in your upcoming dog show." 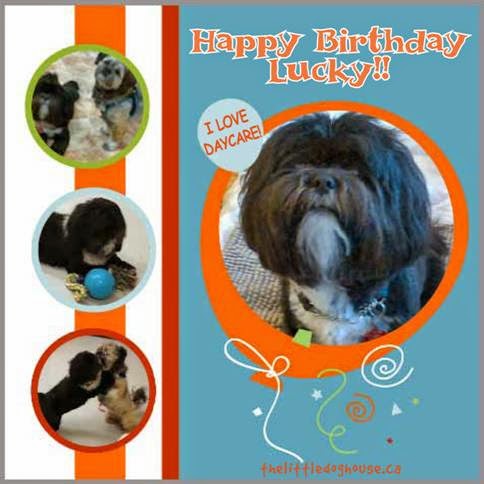 A note from Helen, who owns Josh's sister Sassy: "Sassy exudes confidence, Joyce.  She brought a new playfulness to the others, perhaps showing them what a normal puppy gets to be: joyful…When we let Sassy on the bed for morning lovies, she is a soft caterpillar.  She wiggled under the covers a few minutes ago out of curiosity.  Sassy knows "piddle pad" and runs to it especially fast when reminded.   She is very smart, sweet, and funny!  …Of all the dogs I've ever had, I feel a unique connection with Sassy, a special love."

LaVonne, who co-owns Josh's sister (formerly known as Cherry), wrote, "Cinder has grown but she still looks small compared to the others. We go for walks every day and she is just a proud little girl on the end of the lead.  She stands fairly well on the table but like Josh doesn't like to show teeth…Cinder goes on the grooming table every night now so she understands that brushing is normal.  She's good about it so far. . . ."

From Lila's (now Lili's) new owner: "I think she is finally understanding her home life and calming down just a wee bit, it was very quiet for about 15 minutes. Collin and I had to go and find her. She was on the tile in the back hall chewing her bone. I think Lili is growing on Tam. I stopped feeling bad for Tam because quite often Tam instigates the trouble, starts  things with Lili just when she is being good for a minute. Tam has figured out a way to get away from her when she has had enough. I think she will keep Tam young. Lili is very jealous when Tam gets any kind of attention. She butts right in...like ME ME. All is good. She is our entertainment. She is so cute, her appearance as well as her personality. I constantly have to pick her up and give her hugs! She is really is a beautiful dog, the color of her coat is extraordinary…"

From Belle's owner, Mary: "Once again, I feel lucky Belle came into my life;  such a sweet temperament, a little Peggy Lee in her with her salty little bark, and I think a little donkey, as she can put on the brakes and not budge (on leash) when she wants. Does that as we head for the teetor. She is great in any class as she is not reactive, not shy with other people or dogs. And, she watches TV with Roman. Last week it was All Dogs Go To Heaven, and another is How To Train Your Dragon...It's funny to watch her and Roman at the TV screen.....little Belle's neck is stretched all the way up to get a view."

Here is a picture of Bailey I snagged off her mom's Facebook page. She is sure growing into a pretty red girl.

And here is a picture, sent to me by her owner, of Sadie enjoying her bone. 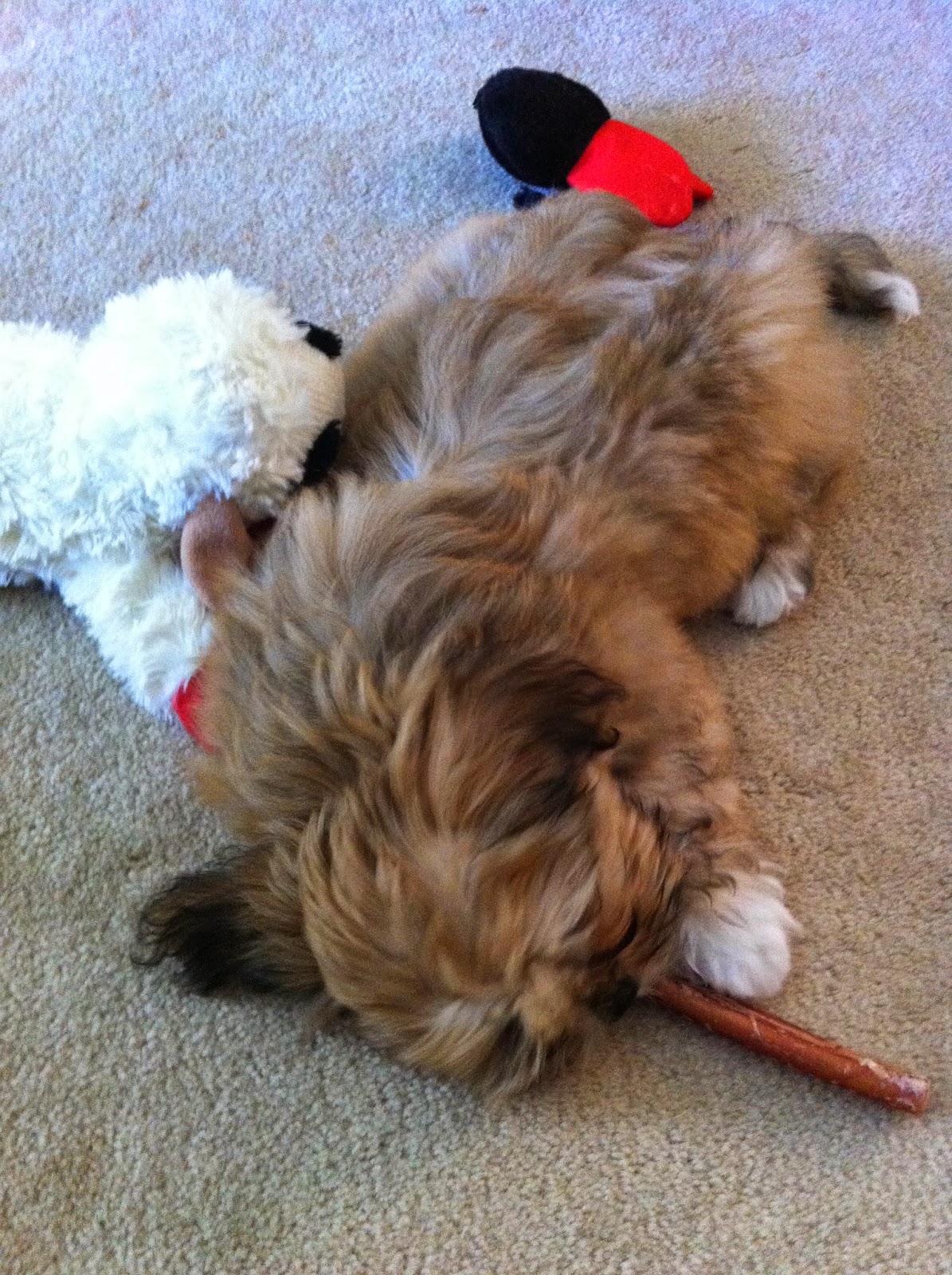 Finally, here is a photo of Yogi. I am not sure how old he is now, perhaps 10 or 11. His owner tells me he hates the camera. The look in his eye says it all! 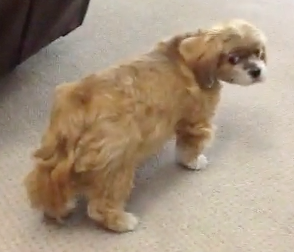 I recently read a judge's statement that criticized the Lhasa Apso Standard. She said it was too vague. That has been a common complaint among many judges. Those of us who mentor and who serve on the Judges Education Committee and give educational presentations about the Lhasa to prospective judges always emphasize that where the Standard is not specific, the judge is to assume "normal canine." So, for example, since the standard does not specify how the Lhasa is to move, then one should assume "like a normal canine!" Other standards, such as the Bulldog's, need to describe movement because it is different than a normal canine's. Therefore, the Bulldog Standard specifies, "The style and carriage are peculiar, his gait being a loose-jointed, shuffling, sidewise motion, giving the characteristic "roll." The action must, however, be unrestrained, free and vigorous." The American Lhasa Apso Club's website has a home study for judges as well as for fanciers. You can find them on the American Lhasa Apso Club's website at lhasaapso.org.  Look in the menu on the left under Breed Information and download the pdf "Learn About the Lhasa Apso" or go to the Judges Corner link and download the pdf "Study Guide." If you don't want to download a pdf, each version is available in an online magazine format.