I write this as the thunder roars, the lightening flashes, and rain pours! I am supposed to be loading the car with luggage and other items I am taking to our National Lhasa Apso Specialty. I leave tomorrow to meet friends in WI. Then the five of us leave on Friday for MA, so I am hoping tomorrow's weather does not include another thunderstorm! I do need to get the car loaded!
You know I usually start with a quotation so here is the one for this post. I thought it would go well with the photo of Josh!
"How beautiful it is to do nothing, and then to rest afterward."~ Spanish Proverb
Our October began well. Rusty and I went to shows in Freeport, IL, on the 2nd and 3rd. The Lhasa entry was small but we all had a good time together. I was proud of Rusty, who earned two single points. On day one he was chosen Best of Breed over a lovely male Champion, and day two he took Best of Opposite Sex also over that Champion. He now has 11 of the necessary 15 points and he just turned 10 months old on October 5! He has done so well for such a young dog. I am taking him to the National and hoping he behaves himself! 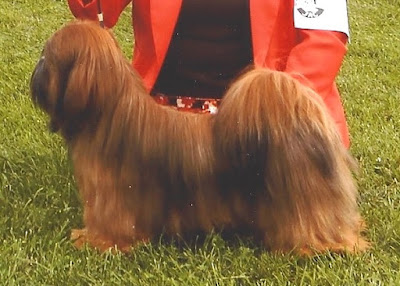 Puppy Pictures
Five of our 7 puppies left for new homes this past weekend. We decided to keep the puppy we call "Pearl." We have one puppy left because no one seems to want an adorable black Lhasa puppy that is smart, spunky, and full of energy and kisses.
Gee...maybe my husband will let me keep two!??
Here is Pearl. She is the daughter of Archie and Onyx. 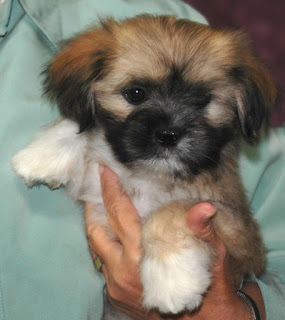 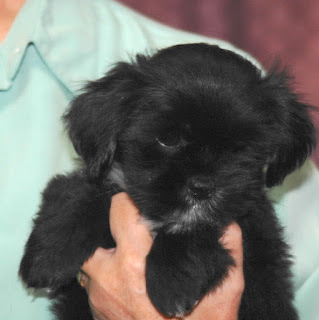 Josie and Pearl have a brother, Milo, who left with his new people on the 8th. 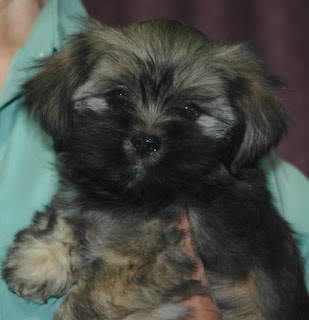 These three have four half-sisters who are also Archie offspring. Their mother is Misti.
Nora (now named Lacey) also left on the 8th. 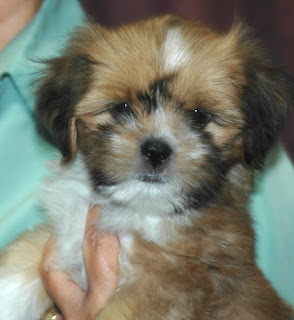 Her sisters, Evie and Chrissy (now Maple) left the next day. 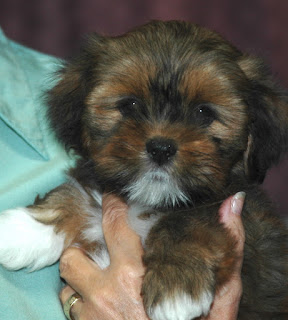 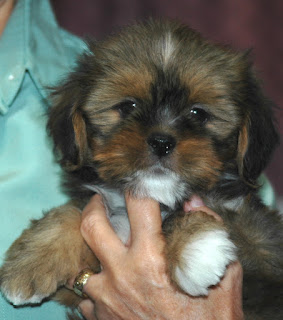 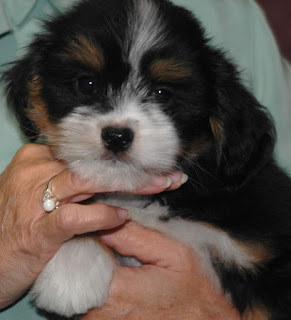 Now you would think that with 5 of the 7 now in new homes things would be quieter and less hectic around here.
Think again!
Notes and Photos from Others
As usual, I am sharing the communications and photos I've received since the last post.
Joey wrote (with help from Paul), "Dad took me to the neatest place this morning. Part of the campground in Bradenton, Florida has a really big off leash park.  I was able to run around as much as I wanted to. I still kept an eye on Dad to make sure he didn't walk too far away from me.
Dad still has to type the emails for me. Joey" 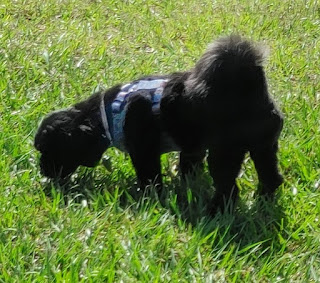 And Paul wrote: "Joey is learning certain signs to let me know when he needs to go potty. These things he has figured on his own. In the motorhome he goes and lays on a Goose Rug at the top of the stairs. If we are driving he just waits until I can stop somewhere. If we are in a campground, he makes sure one of us sees him. We put Ellie on, name for his leash, to go outside. We have names for all of his items in order for him to know what is what. If we are sleeping he will stand on my side to wake me to go outside. We do go out before going to bed. He just can't make it all night at certain times. When we are in the car, he gets up on the center console and licks my right ear to let me know he wants to go. I cannot always stop, I tell him it may be awhile and he lays down to sleep and wait.
[Here is a photo of] One of his most interesting sleeping positions while underway in the motorhome." 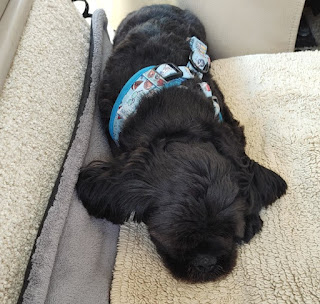 Bernie's new owner sent me pictures taken last night when she got Bernie from me.

Ginny wrote about Maple (formerly known as Chrissy): "Maple🍁 is learning to love her big backyard with mama. Our maples are in the backdrop." 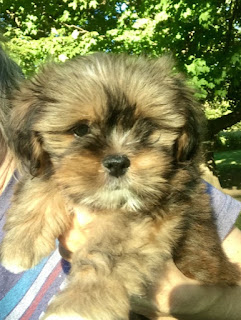 From Debi about Lacey, the Archie X Misti puppy we called Nora: "She gets all wound up at times, especially after eating, and races around our coffee table and living room, then crashes out with her hind legs in back of her when she gets tired. It is so cute!  She loves her kong tennis ball, we roll it for her and she chases it and brings it back. She loves that she can grab it with her little teeth. She spotted herself in our curio cabinet mirror and gave a little puppy bark at herself, it was so cute!" 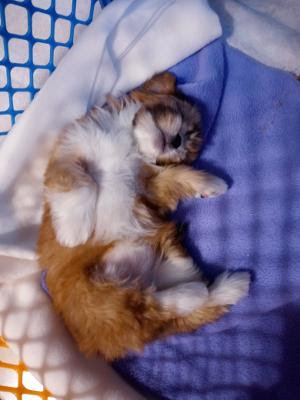 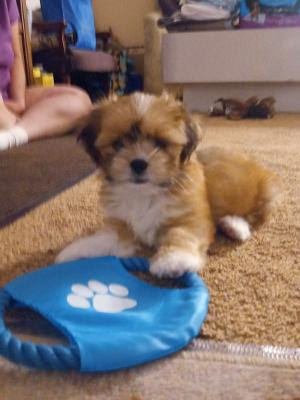 Lori posted a greeting to Josh from his son Finn on Facebook. 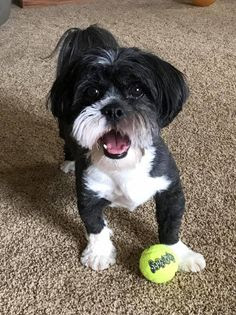 Michelle sent this picture of Sunny: 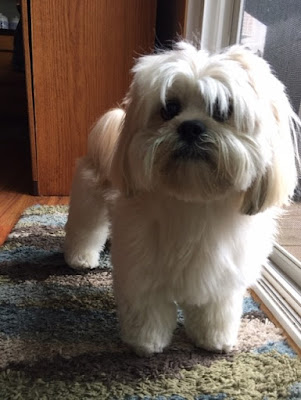 From Molly Anne about Luna:
"Jacob, a little boy who lives down the street rang the doorbell last week. He was upset and trying not to cry. His big dog had gotten out and someone had called the police reporting a vicious dog was loose. He was afraid the police would take his dog away, and asked if Luna ( not me...) would come and find him (His dog is not vicious, just needs exercise). As I brought Luna out on her flexi, a police officer and 3 other people appeared. I told them all to stay back and be very quiet - let Luna do her job. She did. She found the dog ambling down the street and ran right up to him. As they were touching noses, I put my arms around his  neck and called for the collar and leash. Little Jacob said “Luna saved Chance”.
That’s my girl-She is Perfect!!........and yes, I will babble on about her ad nauseum.........."
Mollie Anne sent a photo of Luna and I am going to add one taken of her at an earlier National Specialty when she was a winner. I am so proud to be her breeder. 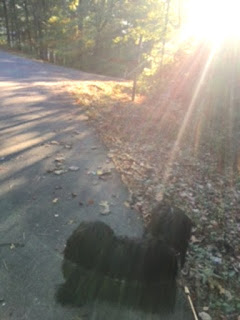 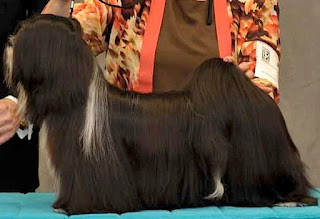 As regular readers know, Onyx recently "retired" and went to her new home in Indiana.
Here are a couple of notes from Judy G about Onyx:
"Oh Joyce, she is just perfect!! Never made a sound on the way home...Once we got home I let the other dogs out in the backyard and then brought Onyx into the yard. She wagged  her tail the entire time and everyone got along just beautifully. No barking, no antics and everyone gets along. She ate her dinner and then went out the back door with the others. ... She loves to run and Ty enjoys having a partner along with him. Later, we will play with the tunnel as all dogs love the tunnel."
A few days later, Judy added, "She is just wonderful!!! There are no barks or growls between any of the dogs. She fits right in. She is sweet, kind to the other dogs, friendly to friends and a little lover girl. Last night we watched an old black and white western TV show and she curled up on my lap for the hour. John told her "Don't be like crazy Izzy" so the next morning when Izzy was galloping around the kitchen island doing her laps Onyx joined her running with her tail wagging and flying. She is potty trained as enough dogs are going in and out all day she figured it out quickly."
From Sally about Ginger and Jaxon: "A couple firsts for Jaxon- jumped up on the couch much to Ginger’s chagrin😂
And first ride in the car out of a kennel- he is hooked in on a seatbelt. He was very good…. They are both very quiet car riders which is nice. They will both be going to the groomer in a couple weeks- Jaxon has been there once so far. Your blog was so interesting as usual. How nice you still have your Mom! The pictures were so pretty of you all. Rusty is gorgeous!!  I hope you had a really good show this weekend." 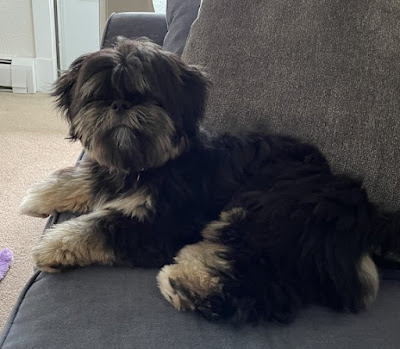 Kris and Fern: "Hi! Our little ham has outgrown his first crate. He still likes to curl up in there for a voluntary nap - we removed the door. Now he’s been upgraded to a playpen and just as expected: he loves it. He’s unbelievably easy to train and a freaking heartthrob. We love all our animals dearly but this guy…. we’re obsessed! Thank you, Joyce! #forevergrateful" 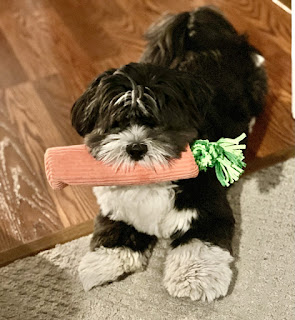 Ty is a son of Josh and Bekka. They have a new litter of three puppies, now two weeks old. Photos, etc. of them when I get back from the National.
Marilyn wrote, "Hi Joyce, I hope you, Lynn, and the dogs are doing well. It’s been quite a long time since I’ve emailed you. I was so sorry to read of Connor’s passing. It is never easy to part with 1 of our family members. I hope you are enjoying one part of your retirement. I know you are still breeding and showing as I really enjoyed seeing the pics of Rusty, and of the puppies I think have just departed to new homes. It has been a really warm fall. I’m just waiting for that chill in the air to hit St. Louis...
I am including pictures of Maci and Hunter. We picked Hunter up 4 yrs ago from the national show here in St. Louis. We always tell him that was his only shot at being a show dog!! He is a typical Lhasa, on guard, wary of everyone he doesn’t know. Maci is the same way. You can never say you’ve seen it all with a Lhasa. As soon as you think so, they come up with a new wrinkle! Take care and Happy Fall!🍁
Maci is the first pic. She knows treats are behind door #2!" 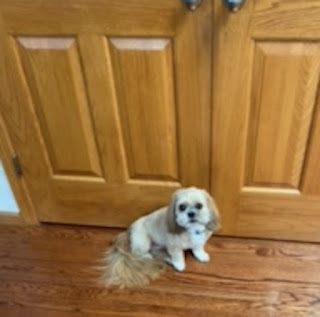 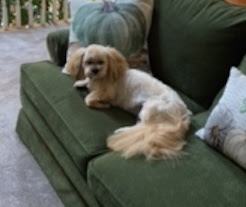 Everyone who owns (is owned by) a Lhasa knows...

Thanks for reading this post! (... and if anyone wants a gorgeous black Lhasa puppy, let me know!)
Joyce