Well, here we are at the end of November! October and Halloween are behind us, as is Thanksgiving. I hope yours was a good one. I evidently caught a "bug" that caused me to do nothing but sleep from mid-morning on Wednesday until it was time to get up Friday morning. Poor Lynn had a frozen pizza for his Thanksgiving dinner! (That was his choice. He knows how to cook!)
I spent Friday catching up on all things I'd let slide the previous two days, especially dog grooming!
Here is the quotation I would have shared with you on Thanksgiving Day had I felt like getting out of bed! 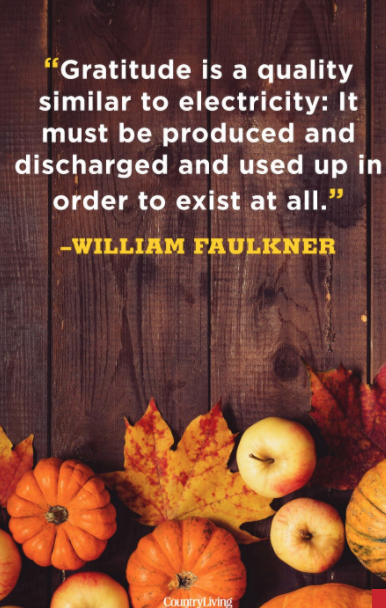 I am indeed grateful to you readers, Lhasa Apso lovers, and buyers of our puppies. A breed that has captured all our hearts, the Lhasa Apso has a proud and ancient heritage. We all must work hard to protect and preserve our beloved breed.
Photos of the Josh and Bekka Puppies, Age 8 Weeks

These cuties, who will be 9 weeks old on Monday, will be leaving for their new homes in a couple weeks.
Our next litters are being planned and we hope to have puppies for those of you on our waiting lists by spring and summer. Plans are to breed Rusty to Millie and repeat the Josh x Autumn breeding that produced Emmy and her siblings.
I confess that puppies are a lot of work -- cute and sweet as they are -- and I am looking forward to a few months respite.
Notes and Photos From Others
From Victoria about Honey: "I hope this finds you well and you had a nice Thanksgiving holiday. First off, I wanted to let you know how much we love and adore our Honey! She's absolutely the sweetest Lhasa, gives tons of kisses and lots of love to all of us; we are just so happy that she's part of our family! She's such a well-behaved, playful good girl, eating and drinking well, and loves her walks in the neighborhood. She's quite the social butterfly too, as she has tons of canine friends in our neighborhood that she plays with. She loves her toys and has a play spot in our living room that she marked pretty much since day 1 of arriving here. She does however hate being in her crate and the minute she's out of there, she goes into it, and one-by-one removes her blankie, toys and chew bones and lays them in her favorite rug spot so they can be 'free' along with her in the home. She's so smart and attentive to her toys' needs. Ha-It's too cute!" 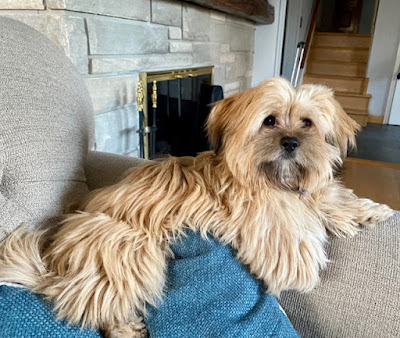 Jim sent these photos of Daisy. She is front and center - with her canine friends at Thanksgiving in Ohio. 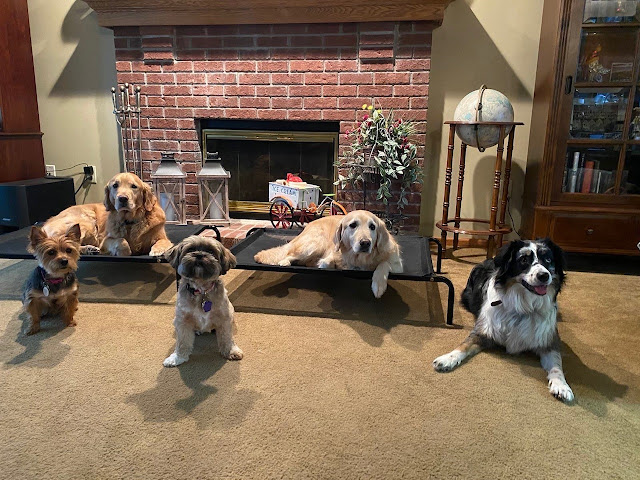 Paul wrote about Lil 1 and Josie: "We went to the off leash area after it cooled down this evening. Lil 1 and Josie were having a blast in the grass. Josie just loves to have Lil 1 roll her over. At one time she rolled over five times. Then got up and wanted more.
Something very strange goes on between them. If Josie's eyes and face is a little bit dirty Lil 1 will clean everything by licking her.
He is getting better with her each day. On walks he will stop to let them catch up.We believe this is just what he needed." Just a note here from me: Lil 1 (whom we called Joey when he was a bottle baby) and Josie are half siblings. Their mom is Onyx. Lil 1's sire is Breaker and Josie's is Archie. Both had the distinction of being bottle-fed puppies.
Paul also sent this photo of Josie sleeping. She sure looks comfy! He later wrote. "Hi Joyce, Josie does the most interesting thing after she eats in her house. She makes a beeline to Little Ones food dish. Of course all the food in the other dish is gone. If we didn't have a house for Josie to dine in, no one would eat the correct food.
Hope everyone has a good Thanksgiving." 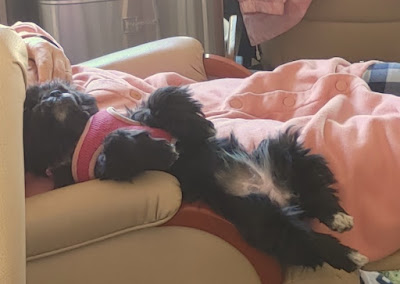 Michelle wrote, " Sunny has been our sunshine when skies are gray! I will never forget seeing that beautiful Sundog after finding out our wait on the list was over and Sunny would be a part of our lives. He came to us at the perfect time and is a true blessing!"

Sally wrote about Jaxon and Ginger, "Hi Joyce!A few pictures- it’s been awhile. Doesn’t Jaxon look nice and fluffy at the groomer’s? He is such a good puppy and tries really hard with Ginger. Slow going there but some progress."

Ginny wrote about Maple: "We’ve decided on Joyslyn’s Maplelline Who’s The Fairest. We are busy with all kinds of puppy antics and loving the privilege of caring for our little pack. She adds so much personality, laughter and sometimes tears (teething😂). She is very good about exploring each of her toys has a good ability to attend and engage with something she’s interested in. She is catching on to ball or toy retrieval very naturally. She explores and is keenly aware. (I love that Lhasa trait) Maple has recently discovered hiding under the couch when she’s decided not to come when called😂but when called again, she pops out with vigor ready for the next adventure. She’s learned her name quickly. When in our family room (we gate it when necessary) it’s open to our main living space.. Maple has a favorite stuffy she holds and then whines baby cry...we call it her cry baby toy.😉This last week we started acclimating her to a harness and leash.. She’s done well! Sometimes we walk sometimes we plop and try to eat grass and sniff the maple leaves but she’s eager to learn🍁I could go on and on and I have🤷I’m just a proud fur mama."
Teresa wrote about Dora: "Hope you had a happy Halloween! ﻿I just want to share some pictures from Dora’s bday a few weeks back. We remembered it was October 8th and made her a cake. Her bday is two days after my grandmother!
She has been sad after a groomer cut her hair, but thankfully it’s growing back!Btw we made sure they didn’t cut her face and tail, but they did take her body down and she was so sad!" 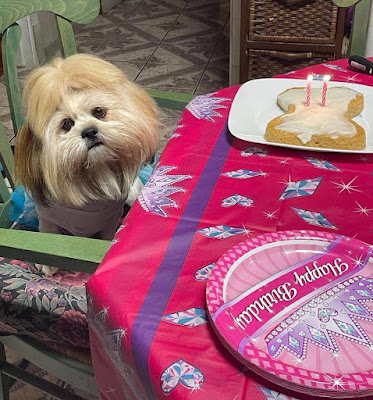 Ginny sent a photo titled "Our Lhasas 🥰 after a full morning of puppy shenanigans mind you." 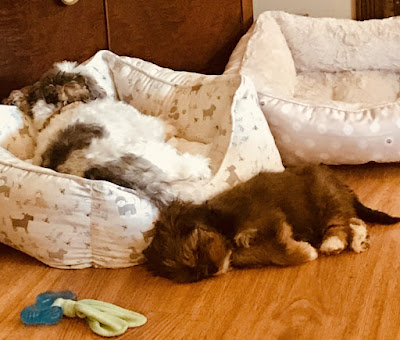 Debi wrote, "Lacey is quite a character and is fearless!  We have to be EXTRA careful with her because of this.  She is already trying to jump on the couch.I had mentioned before that she has mastered getting up the stairs, we have about 7 carpeted stairs.  My husband was curious if she could get down the stairs. So he was at the top of the stairs and I was sitting in the middle of the stairs and she tried to fly like superman and jump over all of the stairs!  Of course, I caught her,
but NOPE, she is not ready to go down stairs yet. LOL. The stairs stay blocked until she is older. She is such a joy!  She loves her new zippy paws, milk and cookies toy.  It has holes in the plush milk carton and she can get the plush cookies out through the holes.  She is so proud when she gets a cookie out and can squeak it all by herself!
Thank you so much for such a wonderful puppy.  She is way more than we could have ever expected!" 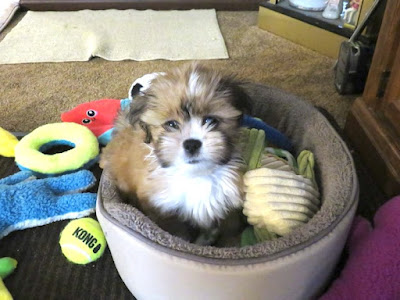 Ted sent this photo of Lucky: 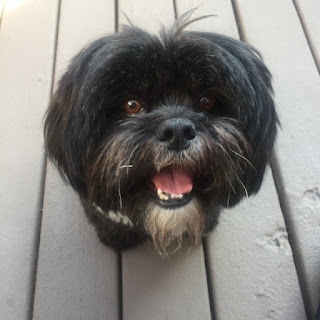 Nanda sent this one of Ty, along with Thanksgiving greetings: 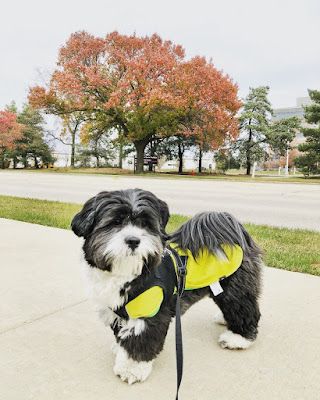 Rebecca sent this one of Archie's litter brother, Carso: Judy L., who owns three Joyslyn Lhasas (Gus, Whisper, and Raven) posted on Facebook:
Asked: "Which antidepresent do you take?"
Me: "Lhasa Apso - Manufacturered by Joyslyn."
Good one! Thanks, Judy!
--------------------------------------
Thanks to all who took time to send photos and updates. I enjoy receiving them and sharing them.
Photos from My Files
Those of you who have been to our home to buy our puppies know that we have a "portrait wall of champions" of our dogs that people walk past as they go down the steps to our family room. Our most recent champion is Emmy, so she had a photo session a few weeks ago which resulted in some very pretty pictures of her. These are my favorites: 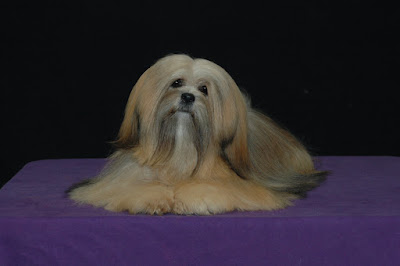 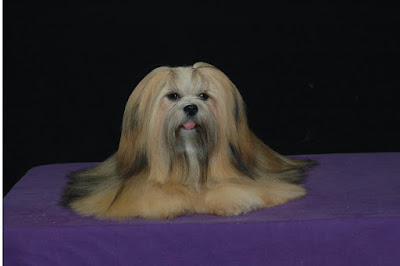 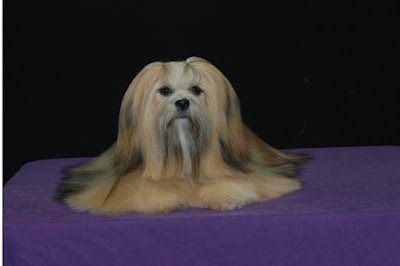 This is Pearl at 14 weeks. She is now 4 months old - a sister of Josey. She is a smart, curious, bossy little girl who loves to cuddle and who thinks highly of herself!! 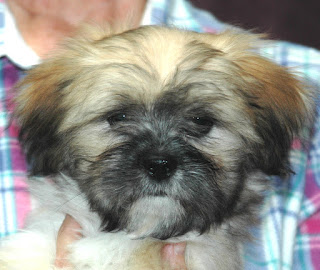 The photos of Rusty's wins during National Specialty week arrived.

Rusty, known to AKC as Chic Choix I'll Do It My Way At Joyslyn, is the third of my Lhasas to earn 3 point majors by taking Reserve at a National. The first was Josh in 2014 at age 9 months.
The second was Autumn at age 7 months in 2018.

Here is the ad that appeared in the American Lhasa Apso Club online magazine. (BTW - if you don't belong to the club, you should join. It is a way to support the continuation of the breed you love! Just sayin'...) 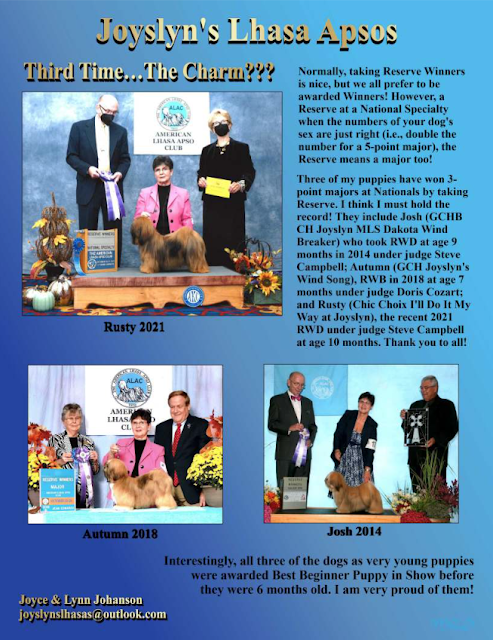 Also, I am excited to tell you that my article about Lhasa Apso personality is due to be in the Show Sight magazine's next issue.
Finally...
I want to end with this quotation from George Carlin that is so true for all of us: 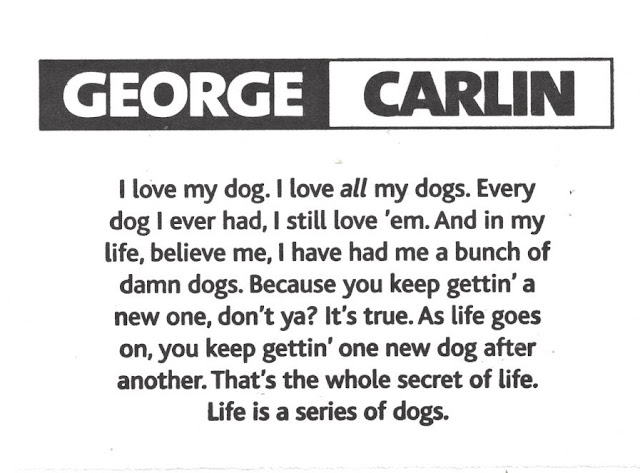 I hope your December is wonderful and that the holidays bring you joy.
Until next time...
Joyce