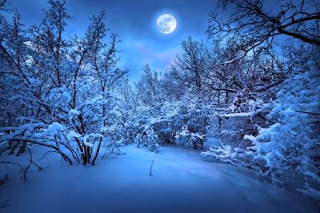 “I wonder if the snow loves the trees and fields, that it kisses them so gently? And then it covers them up snug, you know, with a white quilt; and perhaps it says 'Go to sleep, darlings, till the summer comes again.'” ― Lewis Carroll, Through the Looking-Glass and What Alice Found There

For me it is special because it brings us one month closer to Spring! I am so sick of cold, snow, freezing rain, slick streets, wearing layers of coats and scarves and boots and gloves, not being able to let the dogs out for any generous length of time to potty and play because of the extremely low temperatures...

I am enjoying a nice warm day at home today because it is Lincoln's birthday, and I work at  a state university so it, like all state entities, is closed to honor our 16th president. Springfield, Illinois, hosts the Abraham Lincoln Presidential Library and Museum, a really wonderful place to visit. So hats off to Honest Abe and his place in history. 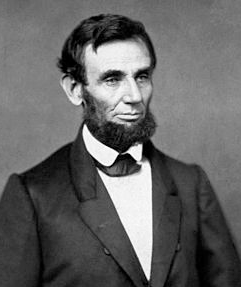 I am also enjoying a day away from the office. Things have been in a constant state of stress at work as two HUGE changes took place in the last three weeks. Both arrived with no warning or little warning. In one case, notice was emailed that the university was reducing reimbursement for use of a personal vehicle for university travel from 58¢ a mile to 20¢ a mile (!). That was bad news because 8 of my staff are located in different cities in Illinois and their job is to travel around 54 Illinois counties providing services to preschool teachers and families of children 3-8. No fleet vehicles are available to them so they are forced to use their own cars.

We received a 3-day notification of the other change which arrived via email on the MLK holiday week. This change required everyone who was not already Civil Service personnel to undergo procedures for conversion to Civil Service status. We administrators and supervisors had two days to get the paperwork done for all our staff members. Of course such a change means a change in status, benefits, time reporting requirements, etc.

What a zoo--resulting in headaches, employee concerns, unrest, stress, and feelings of unfair treatment. It's not over yet, but at least a day off gets my mind off work for a while. (Yet here I am complaining about it, so obviously...!)

Show Results
In spite of weather warnings, Autumn and I went to Indianapolis to a dog show last weekend. I have to admit that I was happy to be at a show in spite of the cold and wind (and the snow that came later). The January snows and ice storms kept us from attending any training classes (the closest one is about an hour and a half away), so Autumn was not as well behaved in the ring as she was last fall. She hates to have her head and face messed with, probably because I constantly have to put up her pony tails since she rubs them out as quick as I put them in and because she has tear stains that I am trying to overcome so I wash her face and clean her eyes a lot too. Anyway, she was not keen on the judge touching her head.

We totally lost on Friday, took Reserve on Saturday, and won 2 points on Sunday, bringing her point count to 7 including one of the necessary two majors. Here is a photo that our friend Mike took of her in the ring on Friday. 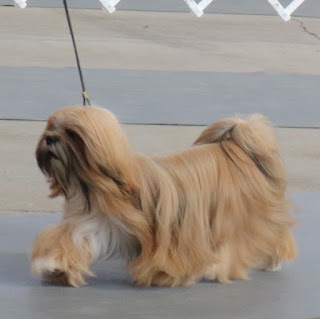 Sunday was a 'hurry up--show--pack up--and leave' kind of day. A snow storm was coming in and indeed managed to hit before we left. We packed the car while dealing with wind and heavy snow. The drive home was treacherous with a snow-packed slick interstate through Indiana. Once we got to Illinois the roads were clearer and remained that way for the rest of the drive to Macomb. Whew!

Our next show will be in WI at the end of March and I certainly hope we can make it to some training classes before then.

My Good Luck
So...it looks like out of the blue I may be able to retire as a millionaire after all. I can go to more dog shows, hire expensive professional handlers, kick back and relax, stop worrying about bills...the possibilities are endless! What a dream come true! How did such a thing happen?

I will share the good-news email I received yesterday: "We are pleased to inform you of the result of the just concluded annual final draws held on the (8/02/2019) by Coca-Cola in conjunction with the British American Tobacco Worldwide Promotion. Your email was among the 20 Lucky winners who won one million Dollars,{$1,000,000.00 Dollars } each on the COCA`COLA COMPANY PROMOTION!"

How nice of them. And I don't even drink Coke! LOL

Photos from Others
Lynne sent a photo of Stone. 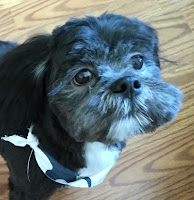 Sally wrote about Ginger, "She really is so adorable. I can’t believe how fast she’s growing. She’s so nice too.... everyone does love her :)" 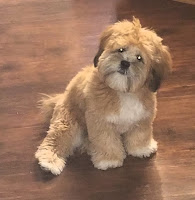 Here is a photo of Rita's Penny. Penny is a full sister to Autumn but from a previous litter. 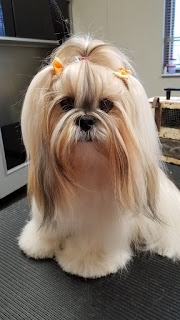 From Victoria about Stella: "I am working on an update with pictures. I will send it soon. I just remembered I never sent you a message after Stella's appointment with her vet. Her vet says Stella is in excellent health; she was so good with everyone there! She and I have been working very hard on the grooming process. I have kept the pads of her feet and nails trimmed, as well as clipping around her eyes. She just needs a full trim…I truly cannot thank you enough for all you did to give us THE PERFECT PUPPY!!!"


Mary sent a photo of her two Joyslyn's dogs, Rafe and Belle, both of whom went to live with her as adults. Rafe has been with Mary for a year now. She wrote, "I think it is coming up on Rafe’s first year anniversary with us. Lots of learning on his part, on mine. I think the best attribute bringing him to live with us is his non-aggressive nature with the girls. I am amazed how Rafe strives to be part of the trio....Rafe starts a tricks for fun class this week. Should be fun for him...I did resort to booting Rafe for some subzero temps. He is not fond of me putting the boots on, even less fond of them coming off, but once he is outside, he prances like a pony, no hopping on 2 or 3 legs from feet freezing. I threatened to leave the boots on during his grumbles; he wasn’t impressed. I hate putting them on, really tough to get on the girls, just making sure they don’t pop off, but below zero is almost a must. Belle will stop if one comes off, like to show me…MY BOOT!" 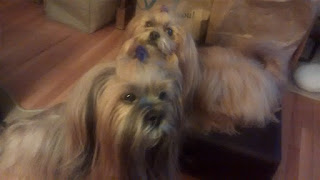 What's Next?
Well, if the breeding between Josh and Bekka resulted in puppies, we should have a new litter around April 5th. We have a breeding planned to take place between Breaker and Onyx this coming weekend. Those puppies will be born in late April. Color-wise, we expect both blacks and golds. Each sire is gold. Each dam is black.

Josh also sired a litter, now about a month and a half old. The dam is a champion co-owned by LaVonne Bennett and me. There are a couple of gold puppies in the litter but most are an attractive tri-color (black, tan, and white). Here is one of the boys. 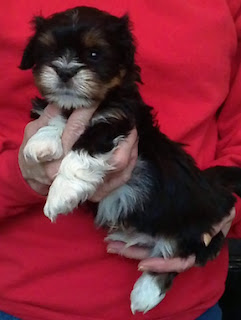 We will have one, perhaps two, adult females (our retired champions) available for new homes sometime this year. Please contact me if you would like to be on the waiting list for one of them.

Finally, Happy Valentine's Day to you all.

"And now these three remain: faith, hope and love. But the greatest of these is love."
~1 Corinthians 13:13