August? Where Did the Time Go?

See the guy with plates spinning? Well, make him a woman and add about 10 more plates and you have me dealing with the month of August!

One thing I learned when I searched for clip art was that evidently the artists think it's mostly men who have multiple plates to keep spinning in life. I was a bit shocked to see that even clip art artists are sexist! Now, when it came to clip art showing people juggling, the sexes were evenly divided - men, women, and clowns!

Yes, August was a busy month for me. The month began with a trip to St. Louis on the 1st to attend the album release show for Black Fast, the metal band for which my son plays guitar. (I am proudly promoting that band, as all my Facebook friends already know.) The reviewers have all been raving, and the first tour ended successfully in spite of some setbacks. The bass player mis-stepped off a curb as he was carrying equipment. He has a fractured left ankle and a broken right toe. The other problem was that their van broke down in Lansing, MI, and they had to leave it for repair and continue their travels with a rented van. Their next stop is New York, NY on September 4; then they swing across the country and into five Canadian venues. Should you be interested in their album, it is called "Terms of Surrender." The band has a Facebook page also.

Okay, enough with the advertising.

So, then I had a colonoscopy. I know — TMI — right? That night our son, daughter-in-law, and granddaughter came from Iowa for an overnight visit. It was great to see them. They lived in Macomb until early June, when they moved to Iowa. It's been lonely without them here.

Two days later, August 7,  I was back in St. Louis, this time as the representative for the American Lhasa Apso Club at the Canine Health Foundation conference. All I can say is, "Wow!" The conference was awesome and very informative as 20 speakers explained their research and preliminary findings on various aspects of canine health. By 1:00 on Sunday, I was indeed "conferenced out" and ready to go home.

I left for the Marshfield, WI, on the 14th. My birthday was on the 15th, and Karen was kind enough to buy me a cake. I'm so glad she did not put candles on it! No one needs to know...

As far as the show results: Luna was Reserve Winners Bitch both days. Mary, who is new to showing, had her first experience in the ring with Riley, who is a daughter of Duncan and Windy. They did a nice job for their first experiences. Josh took Best Opposite Sex each day and gained two more single points toward his grand championship. He also took Best Owner Handled in Breed both days, then won Owner Handled Group 2 on Saturday and Owner Handled Group 1 on Sunday.

Speaking of Josh, here is his photo from the Group 4 win in Ft. Madison, IA, in July. I was glad it finally arrived. (I think the background is ugly, don't you? I was glad I was not wearing my pink outfit!) 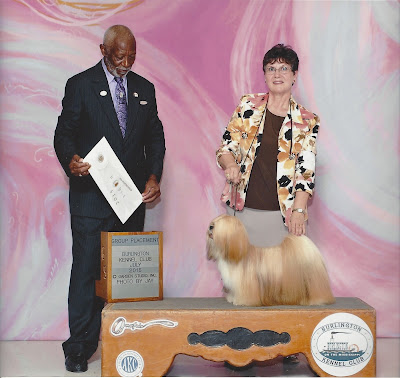 After Marshfield, we were home three days and then left again for four days of shows in Lake Elmo, MN. I took Josh, Luna, and Journey with me and we stopped on our way through Iowa to pick up Mary and Riley. As far as results go, the highlight was Luna winning a 5 point major under breeder judge Beverly Drake on Friday! As for Josh, let's just say "he was there" and leave it at that! It was great to see my MN friends again, people that I get to see only when I attend those shows. I missed the show last year because our daughter's baby was due that weekend. Mary (oops...a different Mary - this one is Mary R) and Belle, whom Mary trains in rally and now agility, stopped by to see us and wish us well. It makes me so happy that Belle remembers me and is excited to see me again.

Marsha took video of Josh and Luna in the ring. I'll share some snippets. The first is of Luna in the Bred By Exhibitor Class.

The next two are of Luna also. This one is the line up for the Winners Bitch Class.

This one is of Luna moving.


These are videos of Josh in the Best of Breed Class.


In this one, look at the lady in the bright blue pantsuit. That is Marsha. She is showing her veteran bitch, GCh. MLS Desiderata Lindy. Lindy is Josh's grandmother. You can also see Karen to the right. She is showing Luna for me and trying to keep her calm and her coat brushed! I have great and helpful friends!


We returned home late Sunday night. Too keyed up to sleep, I did some laundry, unpacked some of the bags, and caught up on my email. Our hotel had lousy internet access so taking my iPad with me did no good.

The month is not over yet! My car went to the shop on Monday to repair the damage caused by hitting the raccoon. The original estimate for the repair exceeded $2600, but the repairman found more damage that will increase the bill. Thank goodness for car insurance! Since the car is out of commission, my friend Jane will be driving to the shows this weekend. We are going to Amana, IA, a much closer show to me than the last two were. Wish us luck!

Here is an article, including comments, about the "Best and Worst" dog toys.


Letter and a Photo

Thanks to Joe, who purchased Jenna (now Abby) for writing such a nice letter. I'm sharing!

"Dear Joyce:
I wanted to take a few moments to thank you for all that you have done. It is about one month now that I have had my new puppy, Abby. I look at her each morning and cannot yet believe that she is mine. She is both beautiful and rambunctious. She keeps me extremely busy which is why I have not written to you sooner. She still loves to be held and carried around and is still attached to her natural Choo Hooves. She can also fool you with how smart she is and in how much she understands. Everybody loves her! I suffered a lot when my last one passed on. Now, I feel whole, once again. I look forward to the holidays with this new bundle of joy. It was wonderful meeting you and in making arrangements to secure this puppy. I see daily how she and littermate Kimmi look so much alike. All of your dogs are beautiful and people here are gaining interest in “our” breed. Hopefully, they will learn more and love this precious breed. I look forward to staying in touch with you and in meeting up when you come to visit or just get out of the winter cold this season. You are very kind and I would heartily recommend Joyslyn’s Lhasa Apsos to anyone who desired a quality Lhasa Apso. Best Regards to you and yours.
Sincerely yours,
Joseph M. Dobkin"

Cindy sent a cute photo of Luther, who also resembles Kimmi quite a bit. (I suppose we should get out the camera and take a photo of Kimmi one of these days! 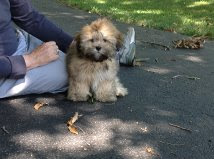 Congratulations go to Helen, who owns Josh's litter sister, Sassy. Sassy and Helen were a winning pair in the show ring. This is the photo taken the day Sassy earned her championship! 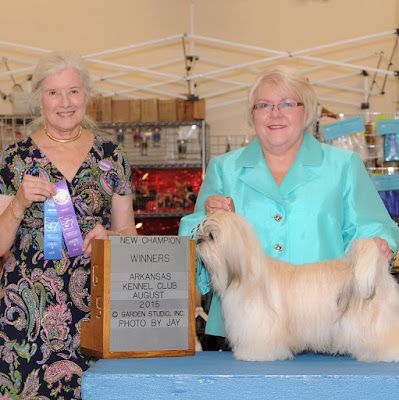