I have to admit that things are really quiet around here with all the puppies now in their new homes. The workload has decreased also, which is not altogether a bad thing. That said, we are hoping that April brings new puppies–and warm weather! I'll let you know if our breedings resulted in puppies. Keeping my fingers crossed...

While I have not been in the show ring yet this year, our girl Joyslyn Mon Ami Winter Wind, a Josh daughter, has had some success in her first two shows with her handler, Sue Cannimore. Her first weekend out with Sue, Winter took Winners Bitch for a point both days. She also took Best of Winners and Best of Breed one day and Best of Opposite Sex the other. (Note: If you are not sure what all that means, here is a quick explanation: Winners Bitch is the female that the judge chooses over all the other females entered. Winners Dog is the male that the judge chooses over all the other males entered. Best of Winners is the Winners Bitch or the Winners Dog the judge chooses as "best"between the two. (I know, grammatically that should be "Better of Winners" but that just sounds weird!) Best of Breed is the male or female the judge chooses over all the Lhasa entries that day. Best of Breed is usually a Champion but does not have to be. If a male wins Best of Breed, then Best of Opposite Sex is awarded to a female. If a female wins Best of Breed, then Best of Opposite Sex goes to a male.)


I will not be going to any shows in February or early March. I'll be entering Millie in shows in late March. I've been trying to find opportunities to take her to the Wednesday classes, but the weather has been too iffy for me to venture out at night for an hour and a half drive each way--or I have had Wednesday night meetings.

From Jan: "Hello Joyce, Pebbles wanted to tell you Happy Valentines..Here are a couple pictures of Pebbles Grace after being groomed. ( which she loves having done).. It’s almost impossible to keep her hair straight right now...🙃 One of my clients said “ why don’t you just cut it!” I told her because she is BEAUTIFUL 🥰❤️. We are amazed that everyday Pebbles is a different color..  By the way how did our puppy’s become 10 months old already!?!?  The time has flown by..How is Millie doing with her training?  Mike and I LOVE all the pictures of her brothers and sisters and other dogs."

From Michelle: "Joyce, you have bred one of the cutest puppies we have ever seen and we are s in love with this little one! We have had a very good week! He's one tired puppy tonight."

Michelle was writing about the Breaker and Jenna male we referred to as Male #1. Here is a photo of Sunny zonked out after a hard day of play.


Breanna sent a photo of Sunny, a daughter of Breaker and Onyx.
From Mickey: "I’m sending a picture of Biddy my youngest g-daughter took of her over the holidays.  Biddy was in a huff over something Mols & I did and went to the floor & stared us down.  Little devil.  She loves people & dogs in general, but she is a growly girl still at the groomers & Vet's office…She still growls at her vet when I am present.  This last visit we went to a different location to see her vet.  I had hopes going to a new location she might be better.  The tech came in the room & she loved her, the vet walked in and she started growling.  They take her to the back room to examine her, give her shots, etc. and she is fine.  This time when the tech brought her back to me she was licking the tech's hands.  The vet was so jealous… Anyway she loves to go visit grand dogs when we go out of town.  She knows the sound of my son in laws car before he comes in the house.  He usually brings the dogs to run our property while he is here.  Biddy hears the car and is at the door whining before we even know he is here.  It is funny."
Cindy sent an update on her dog Luther, who for no known reason suddenly developed some skin problems. She took him to numerous vets, even holistic ones, changed shampoos, gave him a variety of supplements. She wrote, "Hi Joyce, wanted to give you an update on Luther's skin issue, even tho the vet was 'pretty sure' it was a topical /groomer related issue and not food. I took him off BilJac canned, kept the dry and have been doing beef Fresh Pet for about 6 weeks with no issues! Fingers crossed! Love the blog!"

I have heard other good things about the Fresh Pet food. I'm so glad Cindy found that it is helping Luther.

Joy wrote, "Attached is a picture of our darling puppy, who we call Lucy. I took this picture on Monday, when it was almost 70 degrees outside.... a far cry from the single digits the weather was in when we picked her up in Macomb! She looks like she is in jail, but she is in the exercise pen on our back porch. Henry, Ella, Lucy and I were all outside enjoying the weather together. I thought you’d like to see how big she is getting and how beautiful her coat looks in the sunshine."

Joy and Dog registered Lucy as "Winter Weather Advisory" because they drove to Macomb from TN to pick Lucy up during some extreme weather alerts.

From Judy in IN: "Hi Joyce, Our  trial was a success. We added an additional 40 runs this year, and the weather also wan't too bad!. We had one Pach and 3 Machs this year.Two years ago I had an artist friend create 5 polls and in 2018 we gave away one and this year we gave away the remaining four…Ty was Ty! He zoomed through the first 8 jumpers and the tunnel and stopped at the weave poles as if he had never seen them before. He timed out..better luck next year. At practice Monday night he did 36 weaves with no problem...what a character. Tonight is Rally with Winny and the great Izzy.  Another day and another challenge. Some nights she is perfect, and then the following class she is the class clown. Can you believe she is 13 years young? Everyday I thank you for giving me such great dogs.Take care, Judy and the fun Lhasas."

Here are other photos people have sent:

Karen sent this picture of Cooper, a Breaker and Onyx son.
Stacey and Lisa have Male #3 from the last litter (Breaker x Jenna). They also own Lola, a female we bred. Lola is not fond of the puppy, whom they named Enzo; however, their dog Elliot and Enzo have become best friends. Of the photos they have sent, here are two of my favorite. 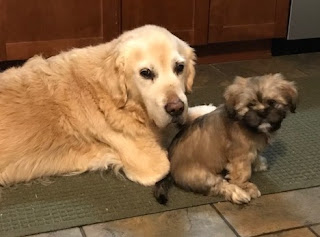 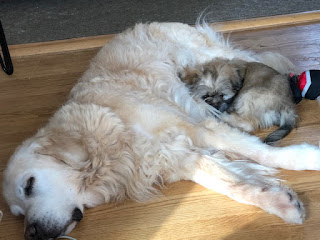 Congratulations Are In Order!

If you watched the Westminster Kennel Club group judging on Monday night, you were lucky enough to see the beautiful Lhasa Apso taking second place in the highly competitive Non-Sporting Group! What a thrill to see Eric, otherwise known as GCHB CH Shut Up and Kiss Me Dell' Alberico at Xeralane, moving so beautifully in that show ring. Congrats to the guys at Xeralane Kennels and to Adrian, who handled Eric so well. What an exciting win! 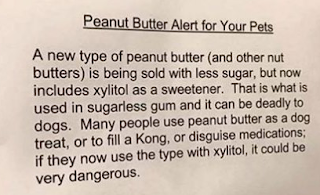 Here is just one that you might enjoy. It is about teaching tricks.  https://puredogtalk.com/podcast/128doug-ljungren-is-up-to-trickstrick-dogsakc-vp-of-sports-and-performancepure-dog-talk-2/

Marsha Susag has an article listing "Fun Things To Do With Your Lhasa Apso" on the ALAC website at https://www.lhasaapso.org/resources/lhasa-apso-play

Speaking of ALAC…would you be interested in supporting the breed by joining the club? Membership is only $35 a year. A full membership requires that you have 2 current ALAC members as sponsors, but the club also has an associate membership that does not require sponsors. Best of all, you already know the person from whom you can get a membership application—me! I'm the club's membership chair. Just email me at joyslynslhasas@outlook.com, and I will email you an application form to fill out and return to me. It’s as simple as that and just another way you can support the breed you love.


In other words, you do not have to be involved in showing dogs to be a member of the club and a supporter of the breed. A $35 annual membership fee costs less than a penny a day! (LOL…now I sound like one of those TV commercials!)

That's All for Now! 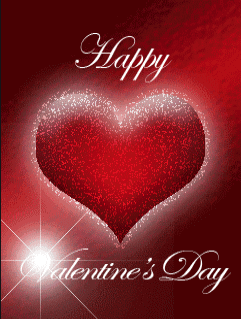