How Can We Preserve Our Beloved Breed?

To read the entire article, What Does It Mean To Be a Preservation Breeder, go to https://showsightmagazine.com/what-does-it-mean-to-be-a-preservation-breeder/

Show Results
Pearl and I have been to two show weekends since my last post. I have absolutely nothing to brag about! We went to the 4 Mississippi Valley shows in Davenport, IA, because I was a member of one of the show-giving clubs and wanted to support both clubs. There were 3 Lhasas there: Pearl in the puppy class and two champions. Needless to say, we had four training classes for Pearl!
We also went to 2 of the 4 shows in Bloomington, IL. Four Lhasas were there: one champion and 3 puppies. We came home with 2 red ribbons (2nd place). Pearl gets crazy ideas. For example, the first day she was in the ring ahead of another puppy. She showed very well! The second day the line-up was the same - Pearl in the lead. Only that day, she decided she did not like the puppy behind her and kept whirling around to make sure the other dog kept its distance. She even looked behind her when she was on the exam table! Go figure!
Here are a couple pictures I took of Pearl that day at our grooming set up. 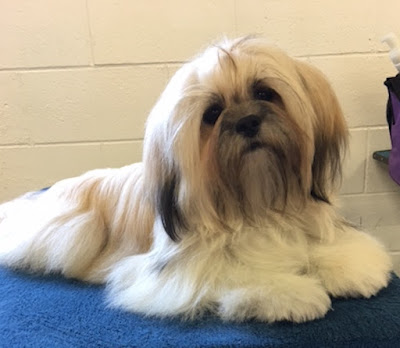 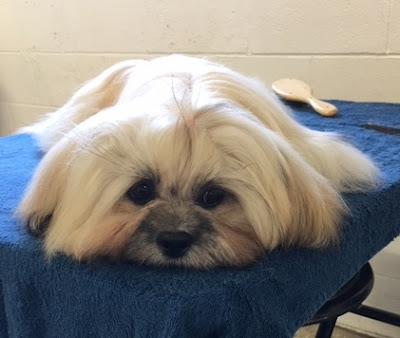 Minnie Update
So many have commented about our little Minnie girl, born weighing 2.7 ounces, hand fed, and now up to 3 lbs. at age 13 weeks. She is thriving - eating well, playing, and learning to have good potty habits. She is very cute and thinks highly of herself! All is well.
Are we planning to keep her? I'm not, but Lynn might be. Time will tell...
Notes and Photos from Recent Puppy Buyers
With the exception of Minnie, the other puppies from the two litters are now in their new homes. Below are some photos and comments from the new owners.
Before he was Auggie, he was Flynn! His new owner Stephanie wrote, "We had a good drive home yesterday.  Little Flynn was such a trooper for the long ride!...Our first night was good - you were right, he's a cuddler!  He didn't want to stay alone in his crate, so I put his bed on my bed and that seemed to work well.  Lady Bug is still ignoring him (and me), but he's approached her a few times.  She escapes by jumping up on something high that he can't reach!  I'm sure it won't be long before they are running through the house playing chase and wrestling!  Thank you again for blessing me with this little fella.  He is just precious! It was such a pleasure meeting you and Lynn."
Later she added, "So, what does a little fella do after his first dip in the doggie pool?  Lay out to dry, of course!!

Auggie (f/k/a Flynn) has been so much fun and is such a delight.  Thank you so much for this little fella.  We love him so much!!!" 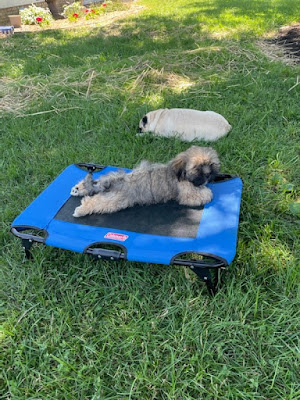 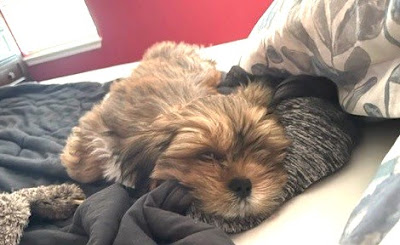 Gwen chose Nellie, now Mozart, as her show prospect puppy. This is a picture of Mozart resting on the exam table at the vet's office. 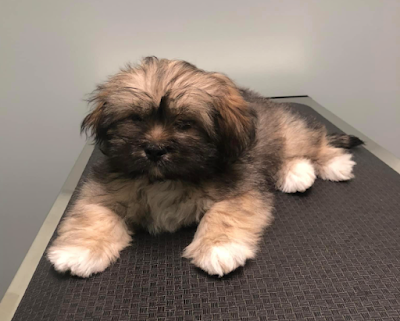 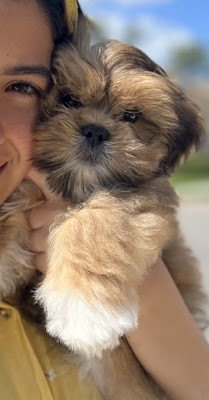 Marianne wrote, "It has been such a great week with Kaiju we are all in love! Kaiju is doing great!  He is a feisty happy guy who loves romping with our ferret Doodle." (Kaiju was FKA "Mick" at our house.)
Jacob wrote, "Harley already made a friend out of one of my parents lhasas (Minnie - in the picture) - still working on the other one (Coco)." At our house, Harley was called "Elsa." 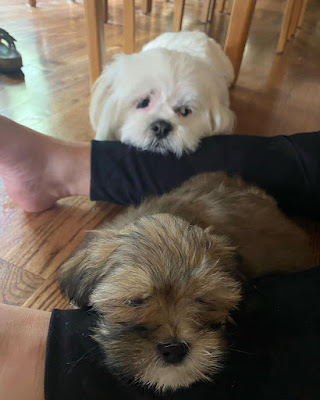 Sometimes it is hard to come up with a name. Rebekah, who now owns the puppy we called "Carma" wrote, "We thought the idea of Karma was good and assumed it might fit her, but after spending this time with her, she is quite “saucy” and now we’re not so sure. She is also very talkative and we’ve toyed with several names, including “Karen,” because when she “yells” at us, we laugh that she wants to speak to our manager ;-) "
Ruth wrote about Dani, She is very sweet and has learned to come when I call her and has learned to sit.  The biting is an issue and she doesn't always respond to the loud ouch. I can take anything out of her mouth and have used a washcloth to clean her teeth and she doesn't try to bite.  I think it is when she gets excited." Ruth registered Dani with AKC as "Joyslyn's Devil in Disguise."
Maggie wrote about the puppy we called Kenzi, "We made it home safe and sound.  The whole family is already in love with her! She is so sweet and spunky." Her new name is Lil Finn, short for Finley. 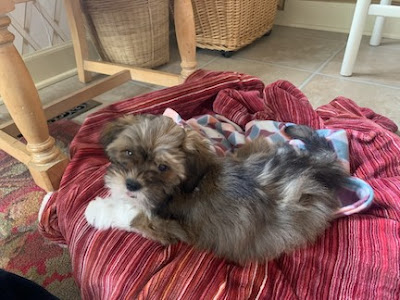 Steve wrote about Bogey (FKA "Griffin") "Thanx for checking in. We named him Bogey. He is doing great.  Has an awesome personality. Thanks for sending some tips in training. So far so good. He is in a good home and will be taken care of very well."
Judy L. now has her 4th Joyslyn's Lhasa. She flew in from CA to pick up Maverick, now named Lippy Jones. She called to tell me that he is super smart, catches on to things quickly, and fits right in with the pack that includes Raven, Gus, and Whisper -- and Little G (not a Lhasa). She says everyone who meets him loves him. 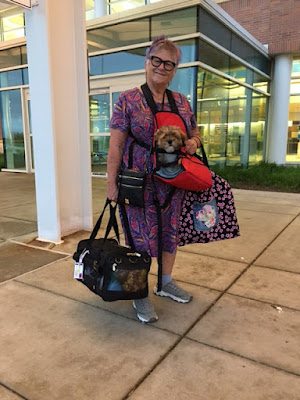 She recently wrote, "This little boy continues to crack me up. He is pretty danged smart for the number of weeks he is old. Seriously. Tonight, I put him in his ex-pen with his kibble. Then I started fixing the feed dishes for the others. Kibble didn't get Lippy's attention at all. Then I dished out a bit of stinky [wet] food. Lippy pitched a FIT. He didn't have any stinky food with HIS kibble. So he got a pinch or two of stinky food. Then I got out the green beans. Once again, Lippy pitched a FIT. So I gave him a green bean. He gobbled it down. When I was handing out feed dishes, Lippy protested again, so I snagged 3 green beans from Gus' feed dish. Lippy practically ripped them from my fingers. He's all about the green beans now."
I swear, he's an adult in puppy clothing. Where is his innocence? He doesn't even have puppy breath. He swaggers around the regular yard like it belongs to him." 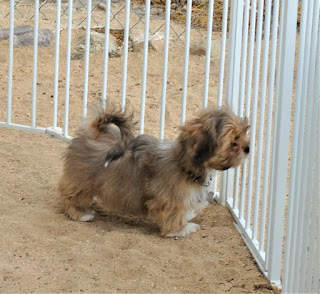 ‹
Notes and Photos from Others With Joyslyn Lhasas
Fernanda wrote, "Happy Belated Mother’s Day!
We are a mess!!! The entire family got COVID-19 for the first time. Most of us had mild symptoms. Except for myself- Fernanda- who had all of the symptoms ever related to the virus!!! Not fun! But Ty kept all of us company! He would rotate from one to another almost like he knew it! One time I woke up from what felt like a coma and he was laying under my lazy boy looking at me with these eyes. I had to take a picture. You can tell he’s sad for his humans. Heck sometimes it feels like he’s the human! Thank God he never got sick! This dog is a healthy beast! He has a happy playful titanium energy and a heart of gold! Thank you for allowing us to share our lives with the most precious dog! ❤️ 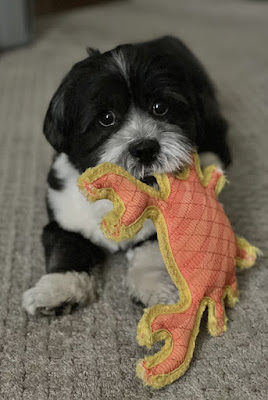 Karen sent this photo of Cooper and wrote, "Cooper is a fine dog and spoiled rotten." 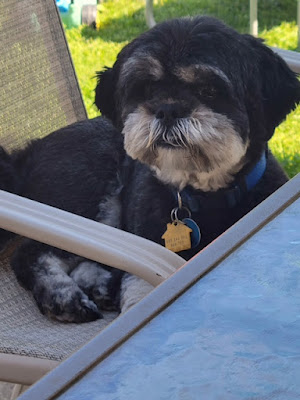 Kim sent this photo of Olivia, who is a daughter of Raven. She wrote, "She is soooo tiny!!! [so is Raven] She is only tiny in size. She has really enjoyed becoming Alpha since Finley passed. She's been a great comfort...Olivia loves to be the center of everyone's world." 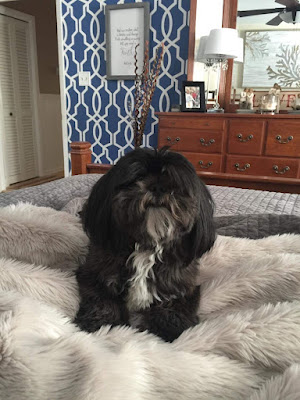 Kassia wrote about Leelu, "Still the best girl ever. Coming up on our birthday and all is well in Iowa. Please let me know if you are coming over to show this year." 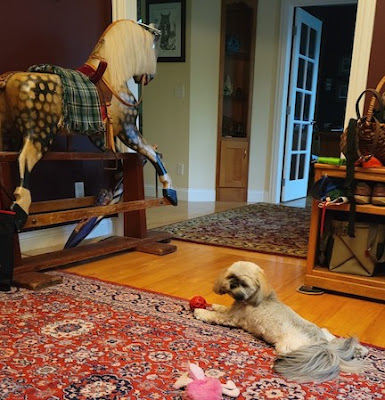 From Sally on the occasion of Jaxon's first birthday: "I wanted to say Jaxon is a wonderful pup and he and Ginger get along almost all the time. They make every day better and like everyone else who has a Lhasa from you I’m very thankful. I get a lot of compliments on how beautiful these two are!" 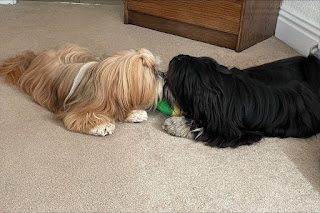 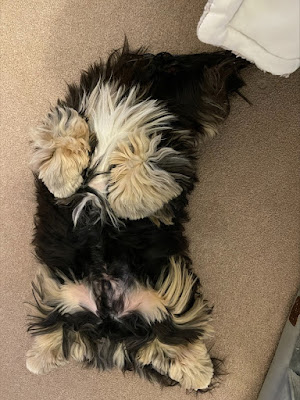 Ted wrote, "It's hard to believe that we visited you 10 years ago to pick up Lucky---Mr. Energy and he hasn’t lost a step---just getting more intelligent---as a matter of fact he listens to commands---all right not always but a few times which is surprising to us. He recently celebrated his 10th Birthday and the following picture was taken before the actual date 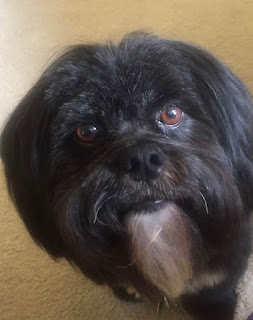 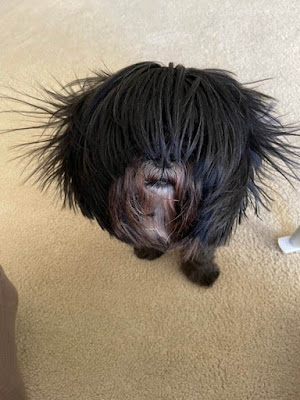 Judy G wrote about Onyx's attempt at Fast Cat in the wet grass! "Well Joyce, What an experience! It was raining and because of the wet weather the grass could not be cut short. The course was a little hilly, so dogs like Nyx couldn't see the 50 yard line where you could stand and call your dog. A long-time friend who owns Westies held her at the start line and let her go, telling her "Go..go." Well, she ran about 10 FEET and turned around and went back to Don. We could have stayed for our second run, but we were wet enough! I will try again sometime... 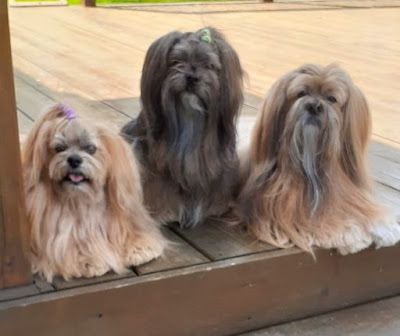 Kathy notified me that Bandit had been neutered and sent this photo of him sporting his soft cone. 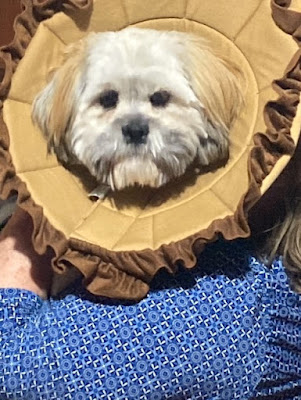 Jim wrote to remind me that it was Daisy's 4th birthday. Where does the time go!!? 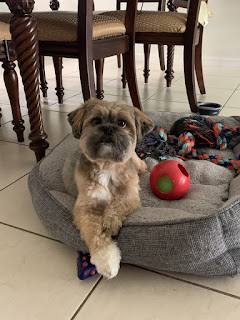 Priscilla wrote to let me know her Rocky passed away. "Just a note to let you know that we lost our little boy Rocky on 4/26/22. He was just about 17 1/2 years old. He was such a good little boy—loving, obedient but independent, a real gentle soul, and a great companion. He was doing well until about 10 days before he died. He suddenly stopped eating, then drinking.  Pam and I miss him so—and so does Ozzie (another of yours, born 12/30/2014)."
Later she added, "Rocky was a little guy—about 13 1/2 pounds, but he had a big heart and was fearless.  As I said, Pam and I (and Ozzie) miss him so much! Thank you for entrusting him to us.  He was such a joy." 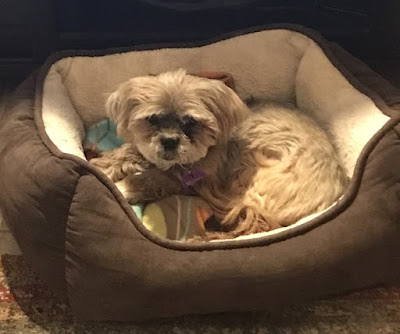 Because Ozzie was so lost without Rocky, Priscilla came to visit and left with Aria (new name to be decided, but it might be Trixie). Aria is the 4th Joyslyn's Lhasa Priscilla has purchased. The first three were boys. If Aria is a typical Lhasa female, she will soon be informing Ozzie that she is the boss! Priscilla is in for a great ride with that puppy! What a character she is.
As all of us Lhasa lovers know;

'Til next time!
Joyce
P.S. Love the bag! Thanks Stephanie! 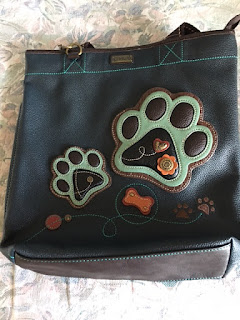 Love the shelf! Thanks Jill! 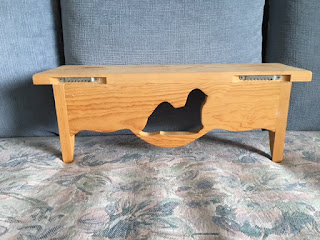