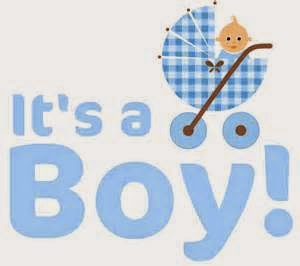 "No cowboy was ever faster on the draw than a grandparent pulling a baby picture out of a wallet." ~Author Unknown

Nowadays, based on my own responses recently, I'd change those last two words to "an iPad!"

As you may have guessed from  the graphic and the quotation, we have a new baby boy in the family. I spent about two weeks out of state visiting our daughter, son-in-law, and their new son. It was wonderful, and I hated to leave. Work was waiting, as were some Lhasas that needed grooming! The Lhasas were very happy to have me home again. I guess they missed me. Of course, come to think of it, their greeting was not much different from the one I get when I come home from work each evening!

I arrived home late last Thursday night, got up on Friday, bathed and dried Josh, unpacked and repacked a suitcase, gathered up all the "show stuff," and took off for a show in Manitowoc, WI. (Note to self: Next year do not leave at 1:00, which puts you in Milwaukee at rush hour!)

Josh had a good weekend, taking Winners Dog both days. I thought the show was great except for a club decision that made me very angry, and that was the decision to announce all the winning raffle ticket numbers over the PA system. There was no reason to announce ticket numbers. People who entered that raffle did not have to be present to win. All the club needed to do was post the winning numbers. The PA announcement of winners went on and on and on because there were many prizes. The raffle table and person making the announcements were right across from our ring, so the noise was even louder with no way to get away from it. Josh, who has always been spot-on in the ring and who loves to show, totally freaked out at the loud, continuing noise. It's my opinion that people who put on dog shows and who show dogs should know better than to expose dogs to that kind of prolonged noise. A friend of mine complained to the people making the announcements but by then it was too late. She was told that the AKC Rep. said it was okay to make the announcements. However, just because something is not against the rules, does not mean common sense should be ignored. Common sense would indicate that many of the dogs in the ring might not appreciate the noise, especially young and insecure puppies who've not been exposed to loud sounds that go on endlessly. I'm sure my puppy was not the only one adversely affected by that PA system.

Here is Josh in the ring before the noise began. 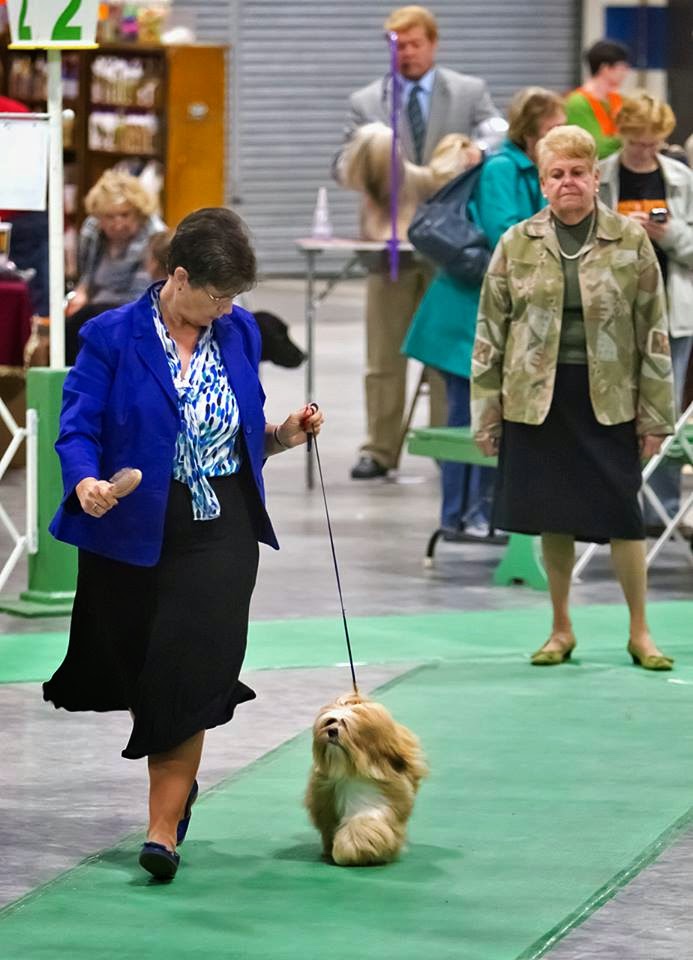 A photographer for the club was taking candid shots and she seemed to like Josh. Here are the ones she took of him. The first two were taken at our grooming set up. The other was taken as the two of us watched the Group competitions. 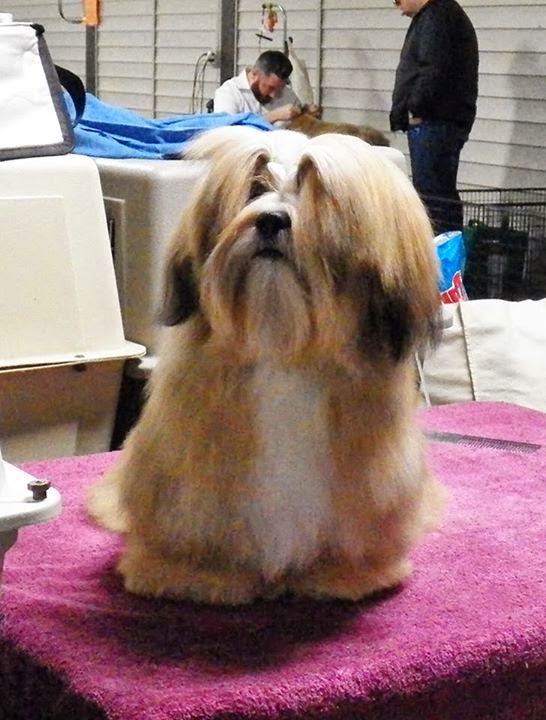 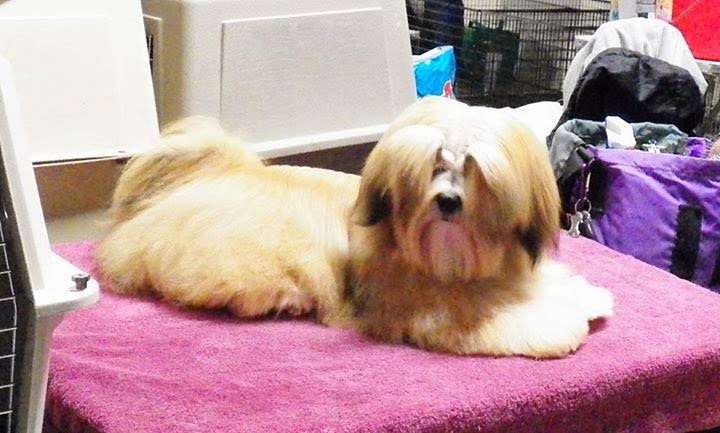 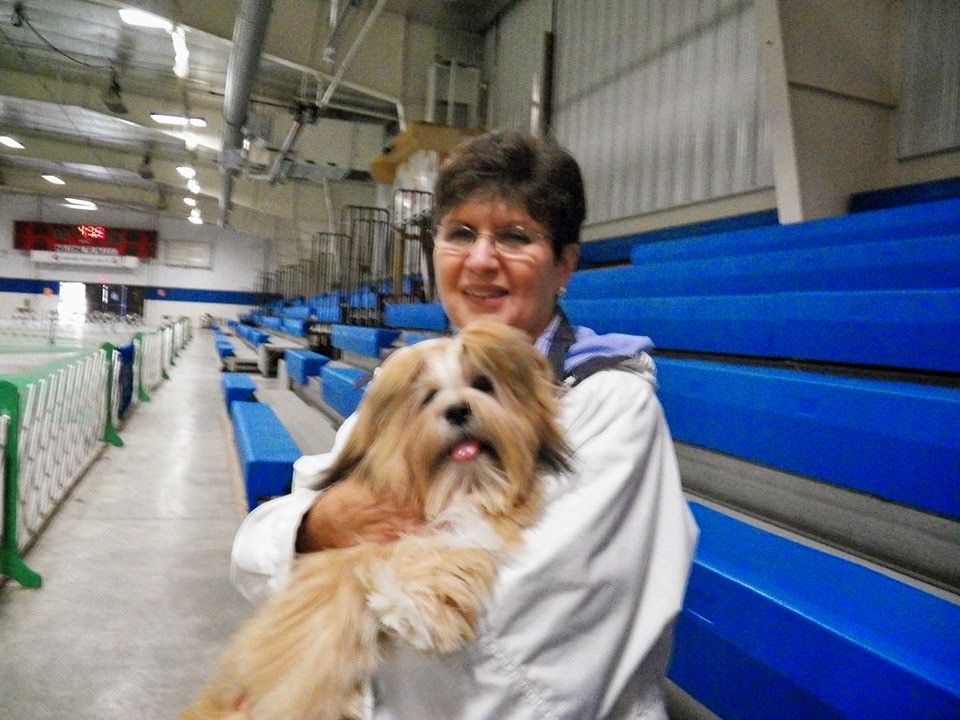 I was pleased that many people sent email and some photos while I was away, holding the baby and remembering how to change diapers (a skill that comes back quickly!)

Maria wrote, "It's been awhile since we have sent pictures of Ella. So I'm sending some of our favorites of her. She doesn't mind taking photos. She's a natural.  She is staying at 10 lbs just as you predicted.....and looks like her mom Maggie. We are enjoying her so much. One of her favorite things is visiting the retirement home that my mother lives in. There she gets to see and visit the residents. Ella is so well mannered and so sensitive to the older residents. She will lie down in their lap and stay there all day if she could. She loves the attention. And gives the love!!!  They look forward to Ella's visits. Dan and I call her our traveling pup. We take her everywhere we go. So she hasn't missed a trip with us. She's a wonderful traveling companion.  We feel so happy thatyou shared Ella with us!!!"

Ella is a beauty. Here is one of the photos Maria sent. Ella is a daughter of our Rafe and Maggie. 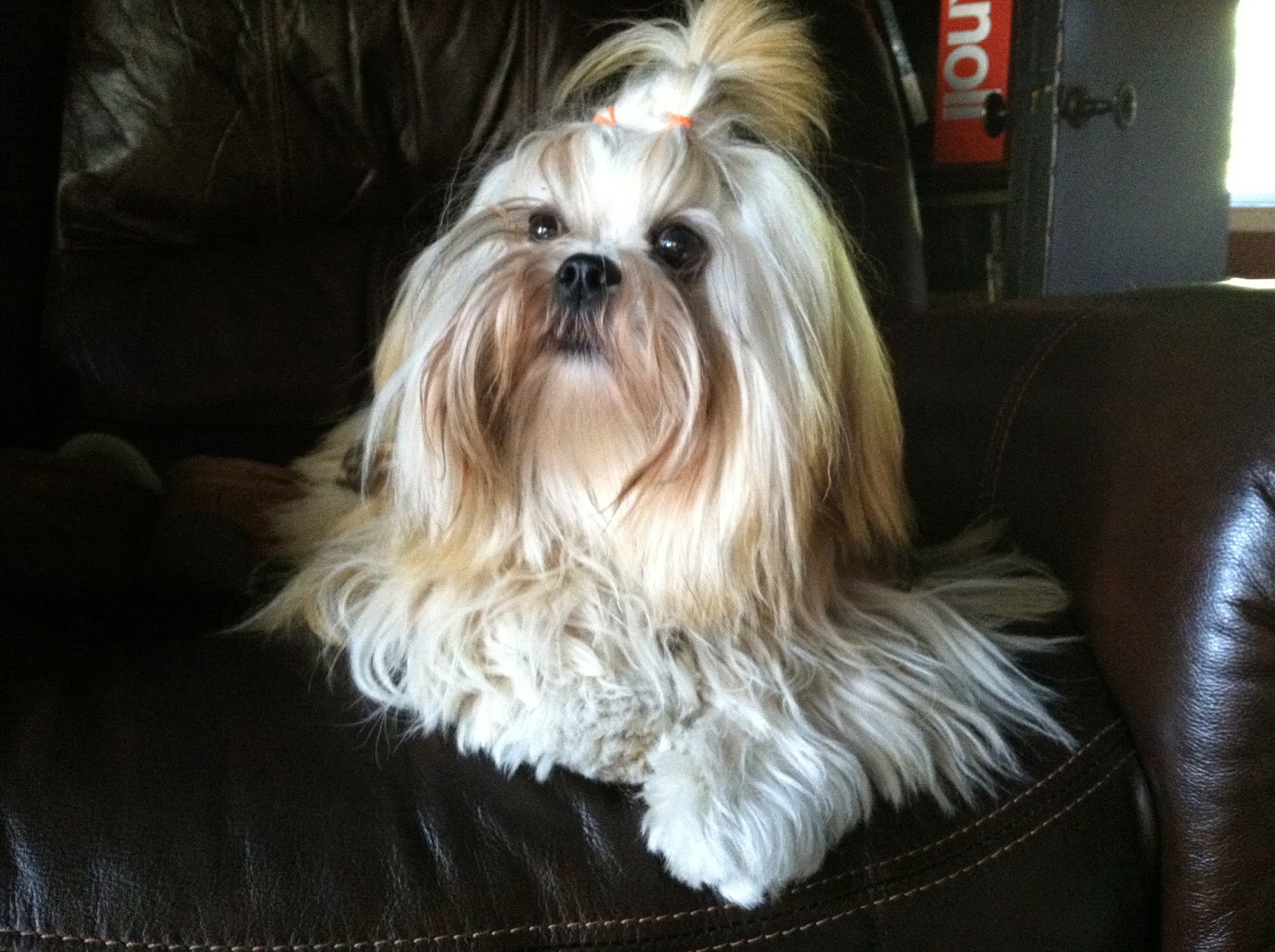 And, speaking of Rafe and Maggie kids, I also received a note and photo from Magoo's owner. Magoo is a younger sibling of Ella.

Catherine wrote, "Joyce, we wanted to share a picture of Magoo! He is growing so fast and is a real character! He still makes his funny noises and is a real sweet, lovable boy!! We are so thankful and blessed to have Mallory and Magoo to brighten our days!! No picture of Mallory today, but I think I have found the secret to getting a picture of these two - don't take a picture of the two together." (Mallory is a litter sister to Ella.) So, the last couple of weeks have been Rafe and Maggie kid weeks because I also heard from the owners of Bailey and Sadie, who are litter sisters to Magoo!

Dawn wrote, "I have attached a couple of photos of Bailey that I took this weekend. She just got
her hair cut and is relaxing on our deck with Dusty.  This is one of her favorite pastimes!" 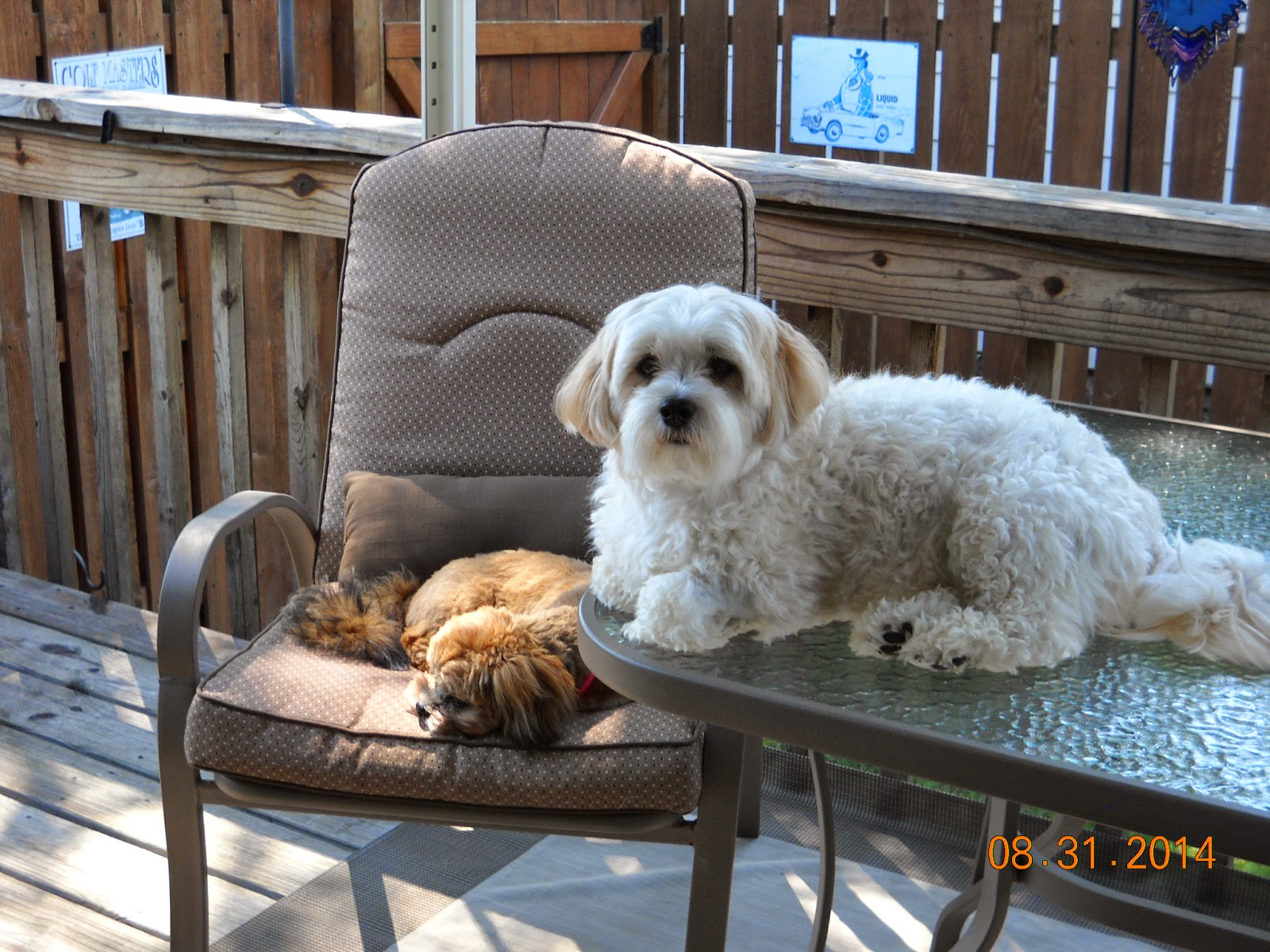 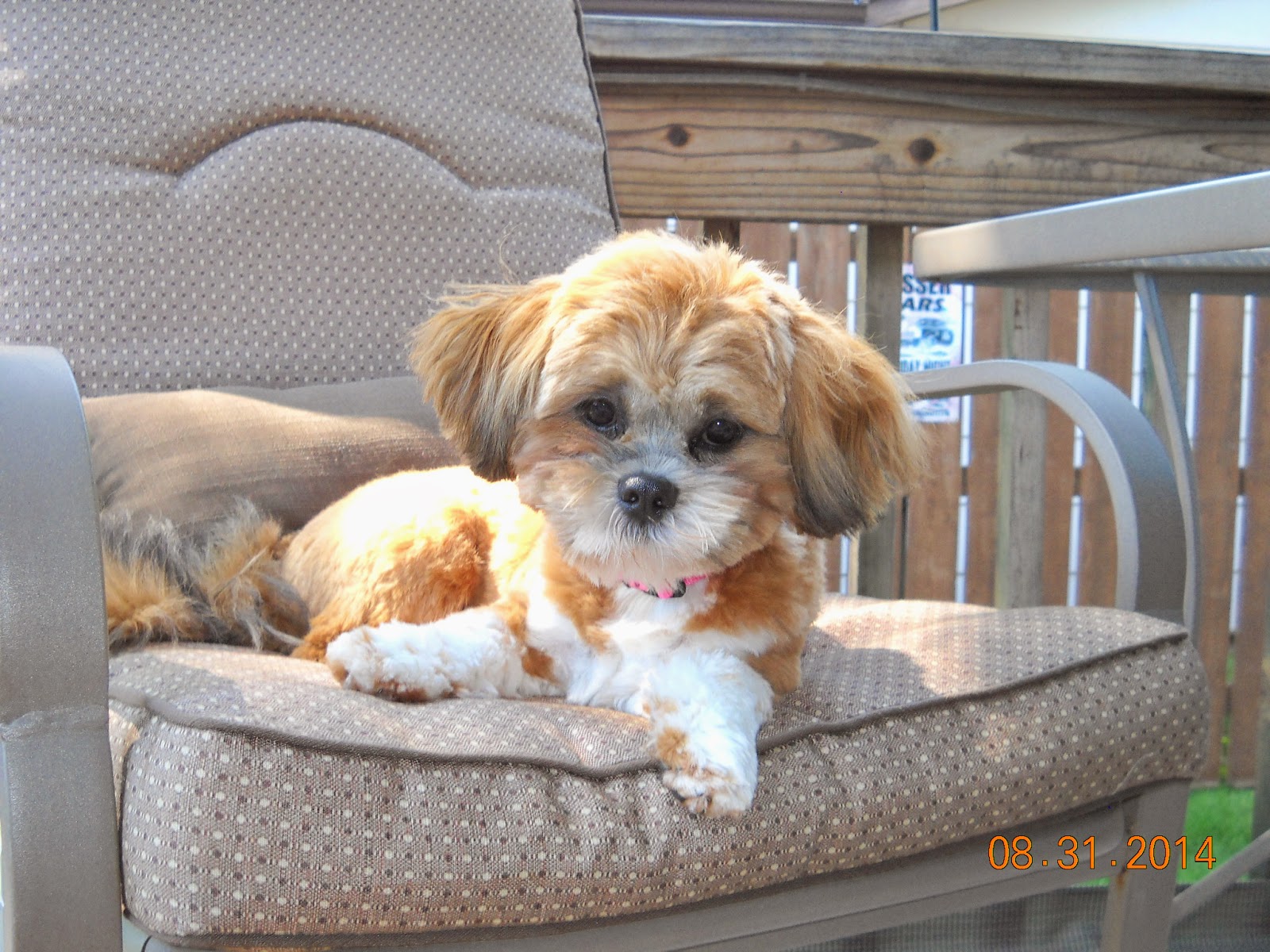 Here is the photo Carol sent of Sadie: 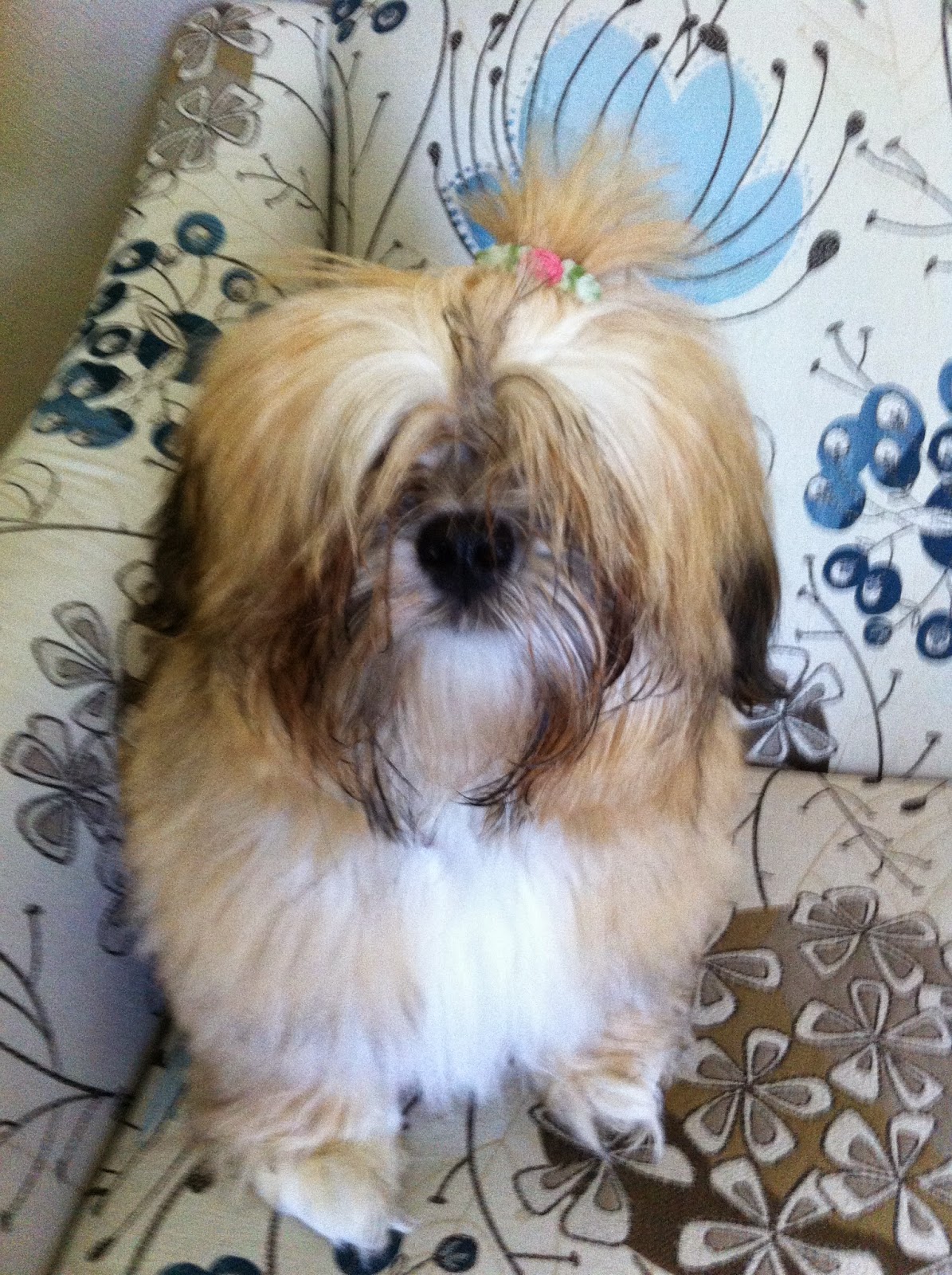 I received a note but no photo from Kyle and Tricia who have one of Josh's brothers. Kyle wrote, "We wanted to let you and Lynn know Tricia and I could not be happier that Fin is part of our family!  He adds so much joy and entertainment to each day, even as he has become slightly more
unpredictable now that he can jump on our bed and couch from a standstill! Not only that, all of our extended family members that met him are totally smitten by his personality and appearance.  We could not be happier!"

Such notes warm my heart and I am so appreciative to hear from our puppy buyers. A note that was especially heartwarming came from the woman who bought our Hannah. Hannah (or Annie as she was renamed) is known to AKC as Ch. Joyslyn Jofu Ladell Handiwork. Here are a couple of photos of Hannah in her younger years as she was gaining points toward her championship. 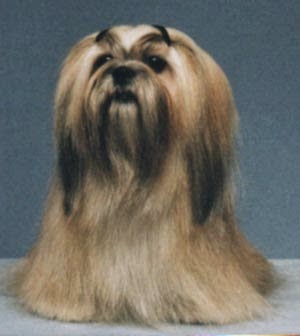 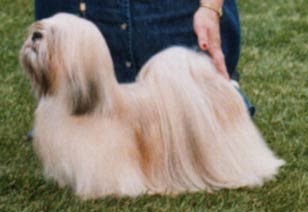 "Hi, Joyce. I just wanted to drop you a line to let you know that Hannah (Annie) is still going strong at 15½. If you remember, I got her from you when she was 7 years old and she's been the 'Queen' of the house ever since. She's losing some of her hearing and sight, but is still very animated at meal times and occasionally when she plays with her Shih Tzu friend 'Mini.' She knows all the most comfortable puffs to sit on, and insists that we share our blankets with her when she watches TV with us (we watch; she sleeps and gently snores). She's not fond of being groomed anymore, so she's in an even shorter 'puppy clip' now. Hope you're doing well. Thanks again for trusting Hannah to us. She's a great little dog."

I also enjoyed the photos Marsha sent of Duncan's litter brother, Jimmy. Regular readers will recall that Jimmy hated the show ring. He is happy being a lap dog, although Marsha reports that he is still suspicious and shy of strangers. Here is Jimmy, comfortable on his owner's lap. 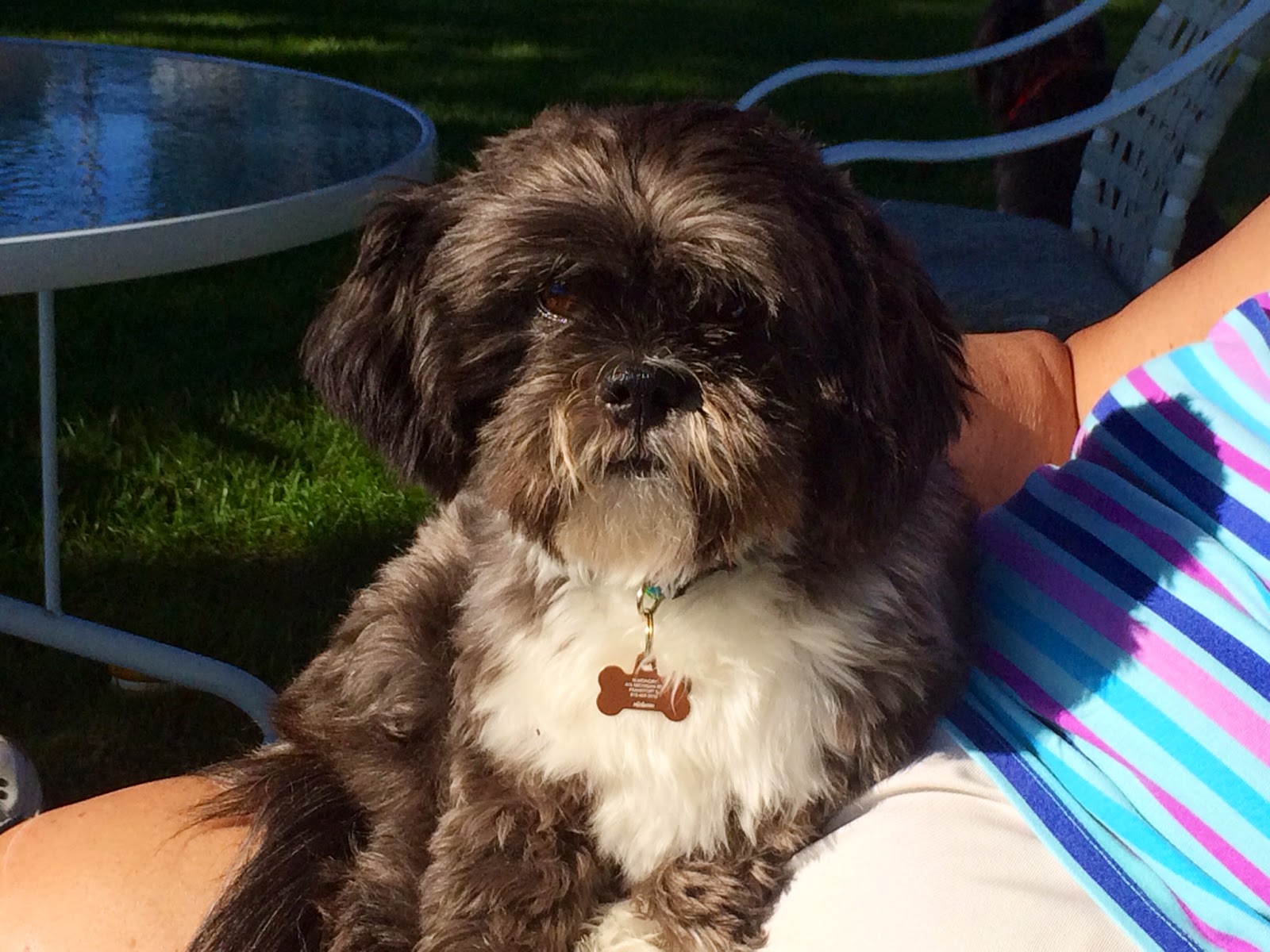 Mary, Belle's owner, wrote, " ...We have 2 new creatures in the house:  2 ragdoll kittens.  Gabby and Gretta…I still have 18 year old Leo, a ragdoll cat. He has been a jewel through the kitten introduction. The next pic is Leo, ragdoll and his assistant, Belle, checking out the first meeting. Notice the 2 chicken Lhasas (feet) in the background.  Belle actually rode in the car for the pickup and ride home, to introduce the kittens to Lhasaland. Belle and Moka have turned into shelties.....thinking the kittens need to be chased, herded, and contained. One gives a pathetic hissssssssssssss; doesn't scare a Lhasa. Belle runs out of her crate when she knows the kittens are free, her back side running as fast as she can; when she finds them, butt in the air, barks to inform them they need to come out from hiding.....she is gentle when she finally gets contact. Belle and I  are still training agility. The only issue is the teeter..."

Sadly, I was also recently informed of the passing of two Lhasas that were born at our house. John's Sparky passed. He was 19 years old. Cindy's Honey passed at 10 years. Both dogs were well loved. Both John and Cindy asked to be put on the waiting list for another Joyslyn's puppy. I was happy to do so.

As far as other updates: Josh and I are headed to shows again next weekend and then to a class or two to prepare for our National Specialty. I'll attach the flyer again in case some of you Lhasa lovers live close enough to travel to St. Louis to see Lhasas from all across the US in competition -- conformation, agility, obedience, and rally. If you are most interested in the companion events (agility, obedience, and rally), attend on Tuesday (10/21). Those events will be held at Purina Farms. The three confirmation shows will be held on Monday, Thursday, and Friday. Come for one or for all days! 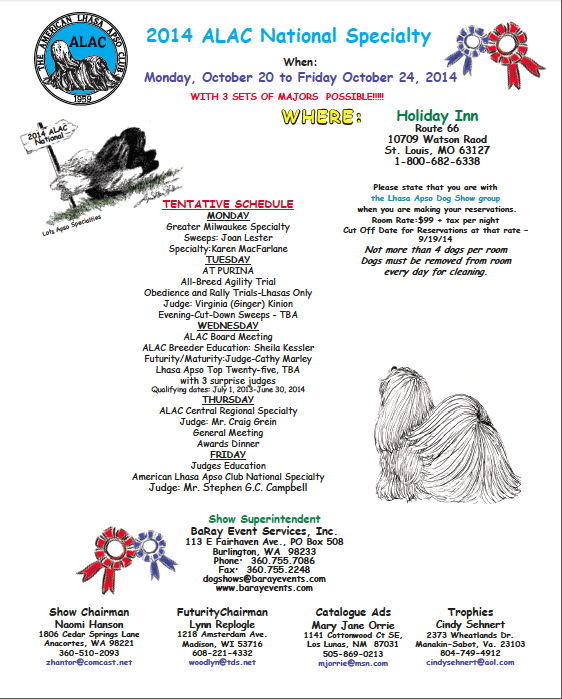 In another week or so, we'll have a better idea as to whether or not we have puppies on the way in October. I'm keeping my fingers crossed, hoping for babies! The next breeding is planned for sometime in October, assuming Charli comes in season on schedule.

In general, I believe every Lhasa Apso owner will agree when I say:


Life is better when you have a Lhasa to love you!