Christmas was great at our house, and I hope you all had a wonderful holiday also. Both our sons were here, as were our daughter-in-law and granddaughter. We had fun opening our gifts, laughing a lot, eating too much, and just being together again. I am thankful for technology and its ability through Skype to allow us to be with our daughter who lives in Florida. We Skyped a couple times on Christmas Day, and all of us felt closer and better for it. Now if someone could just figure out how to send hugs and kisses across the miles....

Our living room looks so sad and bedraggled. The tree is still up, but with no presents under it, it just looks forlorn and depressing. I'm tempted to take it down and put the decorations away.

We received both paper and electronic Christmas cards. All were very appreciated. It's great to be in touch with family and friends, to read the reviews of everyone's year, and to receive photos of kids, grandkids, and Lhasas. I managed to send electronic cards to friends and family who have email, but I still have to mail paper cards to those who do not. I admit to being so lazy this week. I am fortunate that I work at a university that gives us a paid week off between Christmas and New Year, and I've simply enjoyed the time off by reading and relaxing. It's been great, but it's starting to get old. I'll be ready to go back to work when the time comes and will certainly be more productive!

Here are the latest photos of the puppies taken on the 24th when they were 3 weeks old. They are getting so cute. They are up on their feet and toddling around. They are responding excitedly to the sound of my voice. They still nap frequently but are more and more active for longer periods of time. Enjoy their photos!


Oh...and we finally got around to taking pictures of Raven. Here are a couple of the better ones from her photo shoot. Click the photos if you want to see larger images.

I'll post puppy pictures again next week. In the meantime, please have a fun but safe New Year's Eve, and always remember that

Life is better when you have a Lhasa to love you.

Best wishes for a happy, healthy, and prosperous 2013!

My favorite poem is the one that starts 'Thirty days hath September' because it actually tells you something. ~ Groucho Marx

Yes, September has 30 days, and only 23 are left! I'm looking at my calendar knowing this month is going to fly by. Time always does when I'm busy!

First, I want to share the photo taken on the day Rafe finished. Here the two of us are, posing for that finishing photo. I think he is gorgeous, although I admit to being quite biased about him! He's been enjoying a respite from the shows after going so many weekends in a row. I took Both Windy and him to class on Tuesday, and he at least remembered what it was all about. He hates to stand still on the floor for much time so we need to work on that before the specialty.

I don't have the Best of Breed photo yet, but the proofs of it looked good. I'm hoping it will come next week.

Windy did a great job at class. Obviously, the trip to the 4 Minnesota shows did her a world of good regarding her attitude toward wearing a lead and walking with her tail up. She owned that training ring! Head held high, tail up, she flew around with a "look at me" attitude that I hope she keeps. She does think pretty highly of herself, I have to admit. Here's a picture of her playing with our cat, a Russian Blue named Boris. (The picture also presents an opportunity for you to see the new flooring for the family room.)  ;-)

And, while we are doing pictures, here is one of Maggie, and one taken of Belle and me in Minnesota. Her new owner brought her to see me again. Belle is doing great and enjoys Mary and the other two Lhasas. The puppy pictures were sent by the owners of Lucky and Wrigley, two of the black puppies that were born at the end of April.

A day at a dog show would not be complete without a shopping tour through the various vendor booths. Vendors abounded at the 4-days of the Minnesota shows, and I did my share of shopping and spending money. I had my clipper blade sharpened, then put it in a place where I would be sure to find it when I got home. Alas…I have no idea where I put it! Even St. Anthony, my go-to guy for lost items, has not been helpful in this instance.

The Petzlife vendor introduced Karen, LaVonne, and me to a line of natural products, one of which was the Petzlife Oral Care product. It comes in a spray or a gel. I bought the spray because it seemed less messy than putting gel on my fingers then rubbing it onto the dogs teeth or gums. Anyway, the product is 100% guaranteed to get rid of icky plaque in 30 days of use. I decided to try it on Walker, who is due for a teeth cleaning at the vet one of these days. The hardest thing about using the product is that the dog cannot eat or drink for a half hour before application or a half hour after application. I have trouble remembering to take his water away and then, when I do remember, the schedule gets all thrown off! The product is applied with 2 sprays on each side of the mouth twice a day. We're on Day 8 so far. It smells good. It must taste fine because he is not complaining about it. If it works, I'll let you know. If it doesn't, the company will be making good on its guarantee.

I also bought an Isle of Dogs shampoo that is supposed to work well for removing stains from light coats. I really needed it for Maggie because she insisted on sitting down when she peed and always had yellow stains, especially on her left back foot. Since she is now finished, I haven't yet given the product a try. I wanted it to be a challenge!  Again, I'll let you know the results.

Prior to leaving for the Minnesota shows, I visited our local WalMart where I happened to find some dog treats called America's VetDogs Treats. I noticed they were made in America, rather than in China, and that they were made by Bil-Jac, which is the brand of dog food I use. So, I bought a bag. The treats are soft, easily broken apart for use as training incentives, and my dogs love, love, love them. While we were strolling through the vendor booths at the show, we stopped at the Bil-Jac booth and I mentioned to the rep that I'd purchase the treats and how much the dogs liked them. He then told me about the VetDogs program. I went to the website to get more complete information and would like to share it with you.

Americas VetDogs provides guide dogs for veterans who are blind; service dogs for those with disabilities other than blindness; physical therapy dogs to work with amputees in military and VA hospitals; and combat stress relief dogs to be deployed overseas with combat stress control teams at no cost to the disabled veteran. Read more about the programs. The organization's mission is to help those who have served our country to live again with dignity and independence. Its work is supported entirely by individuals, corporations, foundations, and service organizations. This is a link to a YouTube video about the organization's work. A portion of the proceeds from the sale of VetDogs products support programs for disabled veterans and active duty servicemen and women. 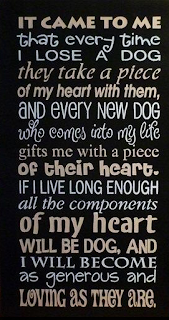 I'd like to end with this sign that has been making the rounds on Facebook. I think all of us who have owned multiple dogs can relate to the message.

Life is good when you have a Lhasa to love you. Give yours a big hug!