August 23rd is a memorable day — 28 years ago my daughter was born! I love her to pieces!
Last week a number of Facebook friends' postings read something like this:  "FREE TO A GOOD HOME: 3 year old child. I've just got a new puppy so no longer have the time for the child. Also worried that the child may bite the puppy. Child is currently crate-trained and has his first shots. Not completely housetrained, but is working on it. Will get along with other children or pets. YOU WOULDN'T DO THIS TO A CHILD SO WHY WOULD IT BE ACCEPTABLE TO DO IT TO AN ANIMAL? If you can't dedicate at least 10 yrs. to YOUR PET, don't get one!! Copy and paste if you agree."
In some postings the child's age changed but the gist of the posting was the same—a well-deserved jab at those pet owners who give up their pets for often frivolous reasons. For example, one of my Lhasa friends who lived in New York once told me a story about a call she received from a Lhasa owner who wanted to "get rid" of her 2-year old light gold Lhasa because (and I am not joking) she was redecorating and the dog no longer matched her furniture. Can you believe that! I'm sure that people involved in rescue have additional ridiculous and horrible stories to tell.
Anyway, reading the sentence, "Child is currently crate-trained…" gave me a mental image of a child in a crate, which in turn led me down memory lane to a dog show in Omaha in November 1982. My son Aaron was 4 years old and, for some insane reason now forgotten, he came to the dog show. I remember Lynn being there also, so we must have been trying to make it a family affair! I was showing two dogs: Elf (Joyslyn's Elfin Magic of Jokang) and Toby (Joyslyn's To Be or Not To Be). Like most children at dog shows whose parents are busy grooming and fussing with the dogs, Aaron became bored, then restless, then whiny. So, while I was grooming Toby, Aaron crawled into Toby's crate and pulled the door shut. I recall saying, "Good place for you!" Along came a photographer and snapped a picture that appeared the following day in the Omaha World Herald. 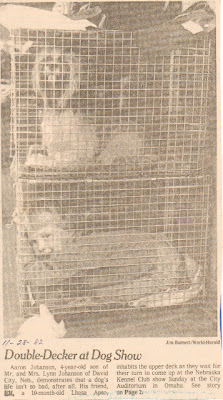 Oh my goodness, did I hear it from my non-dog show friends in David City all the next week! They were teasing of course about child abuse, mostly because just a week or so prior to Aaron's picture appearing in the paper there had been a huge scandal about a day care provider in the Omaha/Council Bluffs area who did indeed keep children in dog crates. What an awful time for a child attending a dog show to appear in the newspaper in a crate! I guess I'm lucky no investigators came to my door! In this day and age, they probably would!
I found the newspaper clipping last night in one of Aaron's photo albums. It's faded and yellowed but clear enough to bring back some vivid memories!
The Twin Cities Lhasa Apso Club has two specialties this weekend in Lake Elmo, MN. Raven, Maggie, Breaker, and I are headed there early Thursday morning. My biggest worry involves preparing for the show. The heating element in my stand dryer is acting up. I ordered a new one on the 15th that has not yet arrived, and even if it comes today, I'll never get a repairman to fix the dryer so I can use it tomorrow night. Drying dogs (or maybe that should be "trying to dry dogs") tomorrow night might not be one of the best experiences I've had! I'm attempting to mentally prepare myself.
Oh did I also mention that this morning I found water all over the utility room floor from the hot water heater? What a mess! A wonderful customer service woman (Laura) in the Warranty Department at Sears has been very helpful and perhaps we'll have a new water heater by the end of today.
Life is good when you have a Lhasa to love you!
Joyce
Posted by Joyce at 7:51 AM 1 comment:

We've had a hiatus from dog shows and I'm really looking forward to the next ones the last weekend in August. Breaker,  Raven, Maggie and I are headed to Lake Elmo for the Twin Cities Lhasa Apso Club's two specialties and one of the two all-breed shows. It's almost an 8 hour drive so I decided to head home early  Sunday morning rather than stay for Sunday's show and then have to drive well into the night to get home.

I'm sharing pictures of Raven's win at the Waukesha show in July. She looks so pretty. 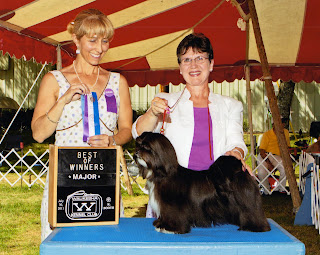 Here's a picture of Breaker taken on the previous day. I cropped myself out  because the photographer caught me as I was bending over. I remarked that at least the picture of the top of my head  indicated I had a full head of hair, no scalp showing! One of friends commented that I could also be glad no cleavage was showing. (Ha...now you wish I'd post the whole picture, right?) 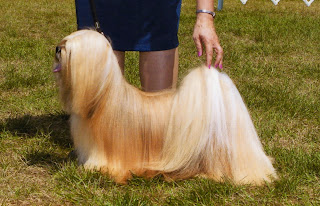 Today is my birthday so it was a nice 'present' that these photos arrived in the mail. I was looking forward to seeing how they turned out!
Life is good when you have a Lhasa to love you!
Joyce

What Color Is that Puppy?


The question of Lhasa Apso color often arises when a person is filling out the AKC registration paperwork and suddenly stops, considers the color codes, and asks, "Hmm…I wonder what color she will be?"

Lhasa puppies tend to change color as they grow, and often it is difficult to predict just what is going to happen to the color. For example, a red-gold puppy with some dark overlay might, as she grows up, lose the red and the dark overlay, and simply be gold with black tips on her ears and face (or not!). Knowing that, an owner has to be cautious when registering and think ahead to what might be rather than looking at what is. The general rule I follow is that because the coat color tends to lighten with age, I chose what experience and educated guessing has shown to happen. One way to get a better handle on coat color for a gold puppy is to push the hair the "wrong" way and to check color at the roots. Gold puppies tend to be born a dark gold or brown color and lighten as they grow. Checking color near the skin will give you a better idea of what the coat is doing as it grows.
The colors and codes AKC accepts for Lhasa registration follow.  The codes are in parentheses.
The standard Lhasa colors are Black (007), Black and Tan (018), Cream (076), Golden (093), Grizzle (109), Red (140) Red Gold (152), and White (199).
Alternate colors are Blue (037) (Note: we are not talking Smurf Blue here!), Charcoal (331), Gray (100), Liver (123), and Silver (176).
The standard markings are Black Mask With Tips (054), Black Tips (053), Brindle (051), Parti-Color (038), Sable (026), and White Markings (014).
Sable, White Markings (067) is an alternate marking.
A little confusing, isn't it?
I have never seen a blue Lhasa. The blue that is referred to is like the color of a Kerry Blue Terrier (ranging from a blue-black slate to a light blue-gray). I have only seen photos of a liver Lhasa. The problem with the liver color for people who show is that the Lhasa standard calls for black pigment, and the liver Lhasas have liver pigment so they cannot be shown. Way back in 1973, I saw a Lhasa male whose color could be described as silver. He was a young dog and the color was beautiful but I have not seen one that color since. I've often wondered what happened to that coat color as he matured.
If you are looking for Lhasa resources: (1) The AKC Lhasa pages have some information for people wanting to know more about our breed. A brief "Meet the Breed" description is given, followed by the Standard and then links to the following: Information about colors and markings, a few trivia bits about the breed, a brief history, a few photos of Lhasas (all with long coats), a link to help people find a puppy (but the link only brings up names of people who have listed litters on AKC's classified advertising page), a link to a page for supply shopping, and then one to a few-second video showing some adult coated Lhasas and a cute puppy romping through the grass.
(2) Check out the American Lhasa Apso Club's website where you will find more information about the breed, articles of interest, more photos, and other helpful resources. A map of the U.S. offers help to someone looking for a breeder. Click a state and a box comes up listing ALAC members who live in that state.
(3) Also, don't forget my website with all of its great articles, helpful grooming tips, photos, resources, and links!
Finally, congratulations go to Stacey and Lisa who drove to Macomb last weekend for Dreamer. I'm posting a video of Dreamer as she meets another of their family pets!  I'm proud of Dreamer for being so polite in her play as she meets a new friend.
Life is good when you have a Lhasa to love you!
Joyce
Posted by Joyce at 12:46 PM 3 comments: