Most of This is Someone Else's Article!

New Pictures and Not Much Else

The puppies had their first car ride and vet visit on Monday. Everyone was declared "healthy" and "cute" and "sweet." All were troopers when it came to the shots.

Here are the most recent photos:

Thanks to all who sent email and Facebook wishes for a happy anniversary. We appreciated it.

I'm posting some pictures of Zach. I was talking to someone about him and referred the person to the blog to see Zach pictures. Later I realized that I had not posted pictures of him. He finished his championship in December and I had intended to post his finishing picture but never did! I think I posted pictures of  him on my Facebook page instead! Anyway, here are two pictures of our boy Zach. He is so handsome! He finished with back-to-back majors and looked great in the ring -- the best he's ever shown. It was a thrill to watch him and, again, I thank my friend Jane who did a great job showing him for me that weekend.

The latest puppy pictures, taken about a week ago, are also included in this post. Everyone is doing well, even the little squirt who toddles around like she owns the place! She's a little tyke but not a "runt," a word I always associate with a puppy that is sickly and not thriving. That is definitely not Miss Penny. She's small but mighty! First vet check and shots are scheduled for Monday afternoon. I apologize for being so far behind with pictures. Last week was a busy one, and the schedule for this one looks just as busy.

Enjoy the pictures and remember...Life is good when you have a Lhasa to love you! 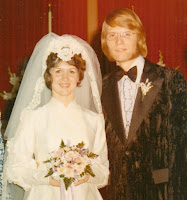 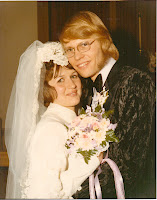 On April 15 Lynn and I will celebrate our 39th anniversary! I'm posting two pictures taken on the big day. Memorable events of the evening include an excruciating headache from all the bobby pins holding the veil headpiece in place, my Chi Omega sorority sisters serenading us, our theatre friends singing "You're Nobody Til Somebody Loves You" to us on the church steps, the cake cutters slicing our wedding cake into pie-shaped pieces (???), the minister handing two of our guests brooms to sweep up the rice on the church steps, and (because I'd told Lynn days before the ceremony to "kiss me like he meant it") the "you may kiss the bride" kiss going on and on and on … until everyone in the church was laughing.

Actually, our Lhasa anniversary passed without me remarking on it. Last month marked our 38th year of owning Lhasa Apsos. Here is an excerpt from my April 2009 blog post that tells the story:
…it all started with an encyclopedia salesman! Shortly after our marriage, Lynn and I were besieged by door-to-door salesmen who tried to sell us all kinds of things we couldn't afford. (We were in our last year of college.) One of those salesmen succeeded in selling us a set of encyclopedias. We both had grown up with dogs as part of our families and knew we wanted to have a dog. The "Dogs" section of that encyclopedia happened to have a very nice picture of a Lhasa Apso in it. Now, if you have ever looked at some of the older Lhasa Apso resources, you would know that some of the pictures of the dogs were not very attractive. So, I suppose if I'd seen one of those photos first I wouldn't be where I am today in the Lhasa world.

After we graduated from college, I landed my first teaching job at a high school in Iowa. With my first paycheck, we bought a refrigerator (Harvest Gold, all the rage in 1970's appliance colors!). When the second paycheck arrived, we bought a dog, our first Lhasa Apso, whom we named Joyslyn's Pheebe. We'd seen an ad for Lhasa Apsos at a nearby kennel. Of course, other than the picture in the encyclopedia, we knew nothing about the breed. We did, however, know how to pronounce its name correctly from the start!


Unfortunately, as evidenced by the photo of Pheebe and Buffy, our first two Lhasas, we did not have a clue about how to groom. As happens with so many first time Lhasa owners, we ended up having to have both girls shaved. We kept Pheebe's coat short but tried to get Buffy's grown out again to show her. She was not having anything to do with being in the ring so, of course, we soon had to get another to show! (That's how it all begins -- just so ya know!). Our third Lhasa was Lutzmor's Dolsa Bo Jangles, but his story is for another day.
Life is good when you have a Lhasa to love you!
Joyce
Posted by Joyce at 6:42 AM 3 comments:

Going through some old photos and newspaper clippings recently, I came across an article from 1985 which was written about us and one of our Lhasas, Joyslyn's Riunite. The headline reads, "David City Native Joins Hollywood Cast of Dynasty." The accompanying photo shows a much younger Joyce and Lynn with Rio, as we called him. 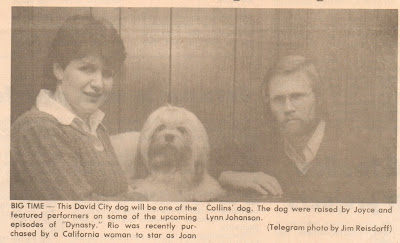 Jim Reisdorff of the Columbus (Nebraska) Telegram wrote:
A canine star is born. Well, maybe not exactly, but even Lassie and Benji had to start someplace.
For Rio, the Lhasa Apso, the road to animal stardom will presumably start with occasional appearances on the television series "Dynasty." He will play the role of pet to Alexis Carington, the character played by actress Joan Collins.  Rio's Hollywood connections are courtesy of his former owners, Joyce and Lynn Johanson of David City. The Johansons, who raise the Lhasa Apso dog breed, recently sold the year-old Rio to a California woman whose firm specializes in providing animals for use in movies and television productions…
…There is already a Lhasa Apso appearing in the series, the Johansons noted. Rio will apparently stand in for, and eventually replace, the other dog in future episodes to be filmed next television season.
The Johansons said they do not watch "Dynasty" so they're not familiar with the role of the Carrington dog. From others, Mrs. Johanson said they learned the dog is used mostly to reflect the elegance of Ms. Collins' character. "All he does is lay on Alexis' bed and look pretty. So I don't know for sure what Rio will have to do," Mrs. Johanson said…
(Then the article provides a brief description of the Lhasa Apso and history of the breed, as well as a brief history of Joyslyn's Lhasa Apsos.)
…Mrs. Johanson is an English teacher at Aquinas High School while Mr. Johanson is a drama teacher at Concordia Teacher's College in Seward. "Lynn made the comment that he's been working in theatre all this time and it's his dog that makes it to the big time," Mrs. Johanson quipped.
I recall that for a while we kept in touch with Rio's trainer, who kept us updated on Rio's appearances, but the only one I remember is that, in addition to "Dynasty," Rio also appeared in a "Highway to Heaven" episode. Then we just lost touch. It'd be nice to know what other television credits Rio had before his career ended.
Other news…we went to our first show of the year (DeWitt, IA), and it was good to be back in the ring. Walker did "okay," losing on Saturday and winning on Sunday. I took Whisper and Raven along for the ride on Saturday. Maggie got her turn on Sunday. They all seemed to enjoy the trip and the extra attention. Maggie was thrilled when a family came by with a young girl, maybe 7 or 8 years old, who held her and made a big deal over her.
Walker and I are headed to Dekalb, Illinois, early Saturday morning for a show. A Sunday conflict limited us to just the one day but, except for having to be on the road by 3:30 AM, I'm looking forward to it!
The puppies are doing well. The schedule looks busy, so I probably will not get pictures posted until later next week.
Life is good when you have a Lhasa to love you.
Joyce
Posted by Joyce at 6:48 AM 4 comments:

What a week! Tuesday night Whisper, Breaker, and I went to class in Peoria. Whisper got car sick and drooled all over herself so I dried her off as best I could and let her sit in the crate for a half hour while I worked with Breaker. He is such a happy up-beat dog. I wonder sometimes if he is all beauty and no brain! In spite of not being shown since he finished in October 2009, he was comfortable and confident in class and interested in all the other dogs. He performed well! One owner brought her rather large Chinese Shar Pei to class and the darn thing kept shaking, flopping its big jowls, and splattering everyone around with slober. Gross! We stayed a couple dogs behind it and missed most of the mess.

When it was Whisper's turn, she  acted as if she were born to it (which, if you look closely at her pedigree, she probably was.) Her tail was up, her head was up and she walked around the room like she'd been doing it all her life. Now THAT is what I like to see! Interestingly, we passed the little test I'd concocted in my head. Our trainer does a good job of examining the dogs and I was curious to see if he would discover that she had only 1/2 an ear on one side. He did not, even after 2 examinations. What that means is that it is highly unlikely any other judge will notice either. Later, when I told him about her mom nipping off her ear shortly after birth, he said maybe it was a lucky omen and went on to tell me about two top winning dogs of prick ear breeds that had had similar accidents and gone on to win Best in Show. Not that I have those high aspirations for Whisper, but I would like to be able to show and finish her!

In addition to the usual weekly grooming, I took a vacation day on Thursday and groomed and bathed Walker in preparation for tomorrow's show. Then I came into the office because our Dean was giving sort of a "State of the College" presentation to the Provost and I needed to be here for that. Then I went to the bank, library, post office, and a Weight Watchers meeting. Then I bought groceries.

Once back home,  I  decided I would take Maggie, Raven, and Whisper girls to the show to give them some show experience and to let my friends see them, so I groomed and bathed all three of them. Then I decided we needed to take pictures of the puppies, but they were all gooey from wading in their food bowl so they got their first baths and first experiences under the big dryer.

I worked hard on my "day off."

On top of all that, our four-year-old granddaughter came over to spend the night.

Tomorrow will be our first show of the year. It's about time! I've been having dog show withdrawal! Wish us luck!

The puppies will be 6 weeks old on Sunday. Enjoy the pictures.

Joyce
Posted by Joyce at 1:55 PM No comments: