Breaker and Mira's litter of five arrived last night, April 25. Of the five puppies, one is a girl. She is black. Two of her brothers are black also, one with white across his shoulders. The other two boys look brown now but will eventually light to some shade of gold.

I'm posting photos of the newborns, taken about 6 hours after the last one was born. I'm also posting pictures of Breaker and Mira. Enjoy!

Catching Up and Sharing Memories

The dog news is sparse. We've gone to no shows since early March, but I did take Rafe to training class last week. Our class is in Peoria, so I have to leave home by 5:15 to get there by 7:00, and I don't usually get home until after 10:00. For that reason, it is not always convenient to go. I'd like to go every week. Rafe had not been at class for a few weeks, nor had he had a lead on since the last time. I was very proud of him because he remembered what to do and gaited so well around the ring, stood still for examination on the table, and free stacked himself a few times on the floor. I'm very excited about his prospects as a show dog. Time will tell! Oh…and he is now officially registered with AKC as Joyslyn's Inherit The Wind.
Soon there will be more dog news as we begin going to the May shows: the Badger and Janesville shows in Jefferson, WI; the Scott County shows in Rock Island, IL; and the 4-day Memorial Weekend shows in Bloomington, IL. I am really looking forward to them—to showing Maggie again, to seeing my other Lhasa friends, and to starting Rafe's career on May 27 when he'll be 6 months old. Mira is due to have her and Breaker's puppies on April 30, so there will soon be new baby pictures to see. 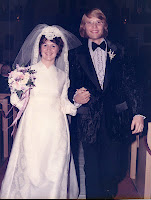 On the people side of my news is that on April 15, Lynn and I will have been married 40 years! I'm posting some photos about the wedding. We were so young! There is an interesting story about our wedding cake that was written for a newspaper. I hope you'll be able to read it. (If you click on the  photo, you should be able to enlarge it a bit.) Our mothers were so worried when they found out that Lynn's roommate, Ron, had volunteered to make our wedding cake as his wedding gift to us. Lynn and I agreed to have him do it, but the moms were beside themselves with worry. Ron got the white frosting on but did not get the lavender frosting decorations done, so only an hour before the wedding, he ran to the flower shop, bought fresh flowers and decorated the cake with them! It looked good and tasted good too. Another funny story about the cake is that the friends I'd asked to cut the cake had no idea how to slice a round wedding cake. So they just cut HUGE pie-shaped pieces from it. Funny! Fortunately we had plenty to go around. 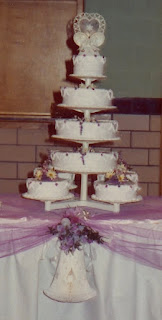 I found the receipt for our wedding bands in a scrapbook. Mine did not even cost $70! I'm also posting the receipt for the flowers. My bouquet was $15.50!! Ah…"the good old days." Gas prices were probably under 75¢ a gallon too! I can't remember! 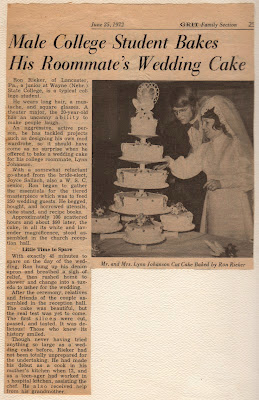 On our honeymoon we searched for puppy. (Gee…that's not what every newly-wed couple does on a honeymoon???) We had problems finding one we wanted and could afford so at last found a cutie from the animal shelter who ended up costing us an arm and a leg in vet bills during her short life. She probably was not more than 6 weeks old and way too young to leave her mother. She became so ill while Lynn and I were doing our student teaching and my mom was caring for her that she had to be euthanized. Oh my that was awful. She was such a character, even through all her illnesses, that letting her go was so hard. For example, when she was about 5 months old, we lost her. We found her marching with the high school marching band that was practicing across the street from where we lived!
It was a lonely two months without a dog but we were busy moving to Iowa where I had my first teaching assignment. Once we were settled and I'd receive a couple paychecks, we purchased our first Lhasa, Pheebe, followed shortly by Buffy, and Lynn said, "Maybe we could show these dogs," words he has probably come to regret! If you are interested in the history of Joyslyn's and haven't read it yet, you can find it in some of the early blog posts in the archives.
Life is good when you have a Lhasa to love you!
Joyce
Posted by Joyce at 9:32 AM 2 comments:

Well, as Edward de Bono, noted for his expertise on creative thinking, pointed out, “If you never change your mind, why have one?” Indeed! So, part of today's bulletin is my announcement that I have changed my mind! Remember when, a few months back, I claimed that I was not, was not, was not going to keep a male puppy from Dancer and Walker's litter? Well…that darn little Rafe, who reminds me so much of Walker, managed to worm his way so totally into my affection, that try as I might to ignore it, I made the decision that he'd be staying! Since my goal was to keep only one puppy from the litter, that means I have to let Olivia go. I think she may have a home already, but I'll know more by the middle of next week. Talk about hard decisions! 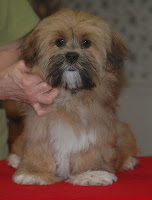 I now have to get Rafe registered with AKC so he can be entered in a May show. I have lists and lists of potential AKC registered names that include the words "Wind" or "Walk." After a week of brainstorming, I think I've finally decided that Rafe will be Joyslyn's Inherit the Wind. I had many hours to think about a name for him since I drove to Nebraska on March 23rd to visit Mom. We had a wonderful visit because it happened that all three of my nieces were home and a cousin and her husband from Omaha decided to visit that weekend also. Mom and my sister are the greatest, and I wish we could see each other more often! It took 8 hours to get to Mom's and longer to get home since I took a detour to David City, where Lynn and I lived for 16 years and where all of our kids were born. I stopped at KV Pet Supply to stock up on some much-needed dog supplies and to avoid paying mega shipping charges on three gallons of shampoo (e.g., a little over $12 shipping charges on a $16 gallon of the rinseless shampoo). We still have good friends who live in David City, but I knew everyone would be at work. That was confirmed by a phone call, so once the supplies were purchased and loaded in the car, the journey back to Illinois began. In spite of the 16 hours of thought, the final decision about what Rafe's official name was not made until this morning.
It is a very good thing that I had not tried to use my credit card since I returned from the Nebraska trip! Friday's call from the fraud department of the card company informed me that the card had been suspended due to suspected fraudulent activity. Oh boy. Fortunately, there was only one big charge and a bunch of $1.00 charges (????). So, I shredded the card and the account is now closed. What a bummer…but I am so glad they caught the problem before the (insert the swear word of your choice) making the charges ran up any more. The customer representative I spoke to admonished me about traveling without calling to let the company know I was going on a trip. Good heavens…who does that? His English was not the best, so I am not sure I understood him correctly. Am I behind the times??? (Well, yes I am – on a number of things – but I had not heard that one before.) So, I should call whenever I go out of town to a show??? Something else to add to my already long pre-dog show to-do list!
Why is it that when I'm away from the office, even for two days, the amount of work that awaits makes me regret having been gone? It's one of life's mysteries!
April promises to be a busy month. Easter is less than a week away; Belle, Gabe, and perhaps Olivia and Dancer, will be leaving for new homes by the end of the month; Lynn and I are celebrating our 40th anniversary (!) on the 15th; granddaughter Klara's 6th birthday is on the 27th; Mira's puppies are due on the 29th; and I have a couple of day-long,  back-to-back out of town meetings. Sadly, we have no dog shows scheduled for April, and I may be going through dog show withdrawal before May rolls around. In May we'll be attending the Badger and Janesville-Beloit shows in WI as well as the Rock Island and Bloomington shows in Illinois. If you live near any of those places and want to experience a dog show, come to see us! Rafe will make his debut at the Bloomington shows.
A friend told me about a product she discovered that worked to totally eliminate the urine odor from one of her cat's multiple "accidents" on her living room carpet. The product is Zero Odor Remover  zeroodorpet.com. My friend gave it a definite two thumbs up because nothing she'd tried before had ever worked. Another similar product that claims to work better is SCOE 10x, which none of us at the office who have pets have tried, but which sounds like it might work well too. scoe10x.com
Life is good when you have a Lhasa to love you!
Joyce
Posted by Joyce at 12:17 PM 1 comment: