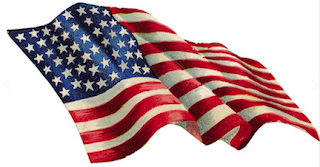 "I have never been able to think of the day as one of mourning; I have never quite been able to feel that half-masted flags were appropriate on Decoration Day.  I have rather felt that the flag should be at the peak, because those whose dying we commemorate rejoiced in seeing it where their valor placed it.  We honor them in a joyous, thankful, triumphant commemoration of what they did."  ~Benjamin Harrison


On this Memorial Day weekend, Kimmi, Greta, Jenna, and I will be at a dog show. There will not be many Lhasas there. Jenna will make her ring debut this afternoon. There are no other Lhasas entered in the regular classes, so this debut will be one of Jenna in the ring by herself and me hoping she holds her tail up. Jenna will show again tomorrow. There is be one other class bitch entered. Little Kimmi will have competition from two other bitch specials. Greta won't show until Sunday. Mostly, it will be a practice weekend for all, and that is "apsolutely" okay!

We did not go to any shows last weekend but our Lhasa family members did. Josh's litter sister, Cinder, earned two points. Cinder is owned by LaVonne Bennett and co-owned by me. 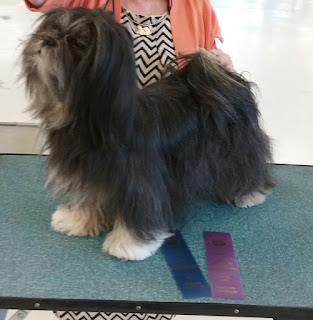 At the same show, Kimmi's half brother Stewie and half sister Penny, took Best of Breed and Best Opposite Sex, respectively, on Saturday. On Sunday, roles reversed, and Penny took Best of Breed and went on to win third place in the Non-Sporting Group. Stewie and Penny were bred by co-owners Jan Graunke and Karen Schlais. Congrats to all for a great weekend! (Photos below courtesy of Facebook postings by Karen and Jan.) It has been a while since I wrote. I apologize, but the days have sped by so quickly and I've had so much to write about that .... well, same old excuses! We've all used them many times.

To start with, I did not get to wish all of you who are moms "Happy Mother's Day!" So here is a belated wish that each of you moms had a wonderful Mother's Day and received meaningful cards and phone calls from your children.

Here is the image I had intended to post prior to Mother's Day. Lest it be wasted, here it is now! 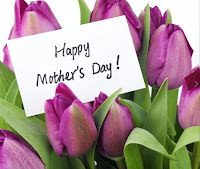 As you know, Josh is not being shown. I am hoping to take him to a few shows again this summer. I think he needed a rest from the ring as he was shown steadily from the time he was five months old. Granted, he's only two years old now, but he needed a rest and an attitude adjustment. He is taking advantage of the "rest" part. The attitude part remains to be seen. 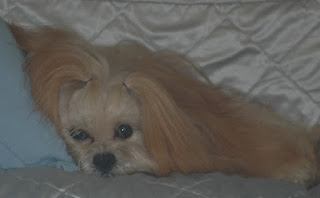 Kimmi and Greta, along with a special guest named Riley, went to Jefferson, WI, for shows on May 6, 7, and 8. These were Greta's first shows, and I am very sad to report that she was quite unhappy about being in the ring. Her tail was down and she was shivering from fear. It was sad for me to see her that way, but the only way to begin is to begin. So we did. Better luck next time, right?

I have heard it said that dog shows are much like gambling. You win just enough to keep you coming back.

Kimmi was awarded Select Bitch each day, earning her the three majors required for a Grand Championship. She has other requirements to fulfill, but at least the majors are out of the way. Check those off the list. Kimmi also was awarded Best Owner Handled in Breed each day. She took a third place in the Friday OH group, a fourth place on Saturday, and did not place on Sunday.

I am sorry to report that Kimmi decided she did not like to show in the group ring! On Saturday we ended up going in at the end of the line-up. Then as the judge started his exam of each dog, Kimmi was spooked by a Shar Pei, as it came around the ring at full speed and stopped right behind her! She'd never seen such a dog!


Riley, known to AKC as Joyslyn's Spirit of the Wind,  joined us for that weekend because her owner, Mary Kaufmann, had prior commitments. Mary purchased Riley from me. Some of you have her siblings, born late December 2014, sired by Duncan out of Windy. Riley is fun to show and the judges appreciated her movement.

Riley was the star of the weekend. She won two of the three days, earning a 5 point major on Friday, and a 3 point major on Sunday, giving her her first 8 points. This is a photo of Riley and me after her win on Friday. Thanks, Karen Schlais, for taking the photo. 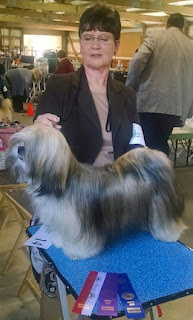 After a few days at home to catch up on laundry and grooming—oh, and to go to work at the office—we also went to shows this past weekend in Rock Island, IL. Since Rock Island is only an hour and a half away, it was nice to drive back and forth and sleep in my own bed instead of a motel room.

Greta disliked this show and the show ring as much as she disliked it all the previous week. Darn! I have to learn patience. She'll get it one of these days!

Here are some pictures taken of Miss Greta. By the way, Greta is a full sister, albeit a younger sister, of Riley. 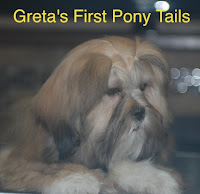 Riley had a great day at the show on Saturday. I showed her in the Open class and she took Winners Bitch. That gave her another 3 point major. Since I took Kimmi in for the Best of Breed judging, Mary, Riley's owner, showed Riley in that class. To Mary's surprise, indeed to the surprise of us all, the judge chose Riley as his Best of Breed. Because Riley had defeated the champions competing for Best of Breed, three of them being bitches, the 3 point major became a 5 point major. Now Riley needs just two single points to become a champion. We are very proud of her. 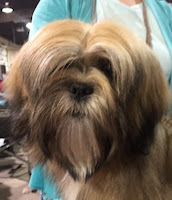 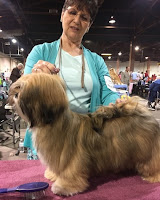 Here is a photo of Riley, taken back at the grooming set up. You can see Kimmi and Greta in their crates in the background. Thanks, LaVonne Bennett, for the photo. 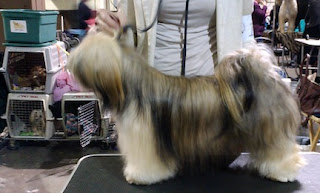 Here is a photo of Jenna (left) and Greta (right) as I was carrying them outside to the ex-pen. Jenna will be old enough to show soon. Her first shows will be in Bloomington, IL, on Memorial Day weekend. If you live near Bloomington, come by to see us! There are fun matches after the Friday and Saturday Best in Show judging, so they will provide the two girls with some extra ring experience. 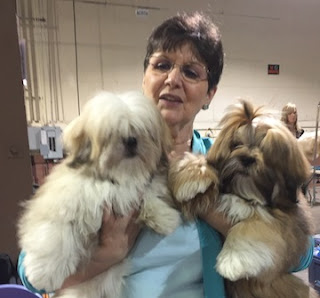 Marilyn and Kathy are friends who have Joyslyn's puppies. Every so often Maci and Sophie get together for a play day. After one such day, Marilyn sent photos and wrote, "Hi Joyce, the girls had a great time playing this am. Here are the after pics. They even lie on the same side. We are so blessed to have a Joyslyn's pure-bred Lhasa…"

And she sent these photos of the girls resting after their day together! I think they wore each other out!


Cindy wrote a note about her Jethro: "…I can't believe Jethro will be 3 years old this week. Time really flies. I know you were not thrilled with the name Jethro but it has turned out to be the perfect name.  Jethro is a big boy around 19 lbs. He has a huge head, is broad across the shoulders and haunches, and is very athletic. His eyes are so soulful and so full of mischief. Everyone he meets says his eyes are beautiful, and he has never known a stranger. Jethro's groomer always gives him a gold star and is amazed by his long, full tail. It really is an amazing tail and always in motion.  He spends a lot of time in the building helping with the show cars.  He likes to drag tools over to his bed so he now has a doggie wrench. This spring he has started walking by the Mississippi and thinks the Canadian Geese should play with him.  He is all boy and is truly a whirlwind of motion always looking for a new adventure.  He keeps us on our toes.  I am not sure he will ever mellow out to be a couch potato!  He is a jewel and one we are very grateful to have in our lives!  Take care and I hope you have an excellent show season!"

Denise send a photo of her Duncan (named after his sire). He's a cutie too! 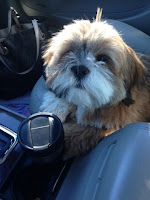 Violet sent photos of her Joyslyn's Lhasa, Yogi. He is getting up there in years and enjoys napping in the sun. 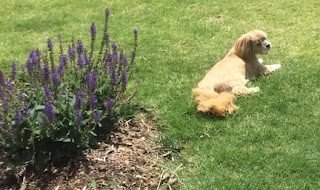 Judy adopted Raven (Ch. Joyslyn's Midnight Enchantment) from me a year ago. Raven recently accompanied Judy on a trip from CA to OK. I received many photos and wonderful descriptions of Raven and the trip. Here is one excerpt and photo. "...The airports were a crack up. Raven walked on leash and one would think she had been traveling for years and years. I could see that many of the passengers were watching Raven and smiling. I also heard people commenting on her. Several people stopped me and asked if they could pet Raven. Raven was very gracious and allowed them to do so. Passengers on all of the flights commented on how well behaved Raven was, even when we had a lot of turbulence. Not a peep out of her."


This next note is not a happy one.

Gail adopted Piper (Ch. Joyslyn's The Charmed One) from us about nine years ago. If I recall, Piper was about 5 years old when Gail bought her. Gail recently wrote that Piper had crossed the Rainbow Bridge. My heart goes out to Gail who loved Piper so very much. Gail wrote, "Hello Joyce, I have some very sad news to share. I lost my sweet Piper yesterday. I am heartbroken but I know I made the right decision.  I miss her.  The house is so quiet and still without her. She made me very happy. I must tell you that she is the best dog I have ever had. Even my Vet said she was the "complete package" - beautiful, smart, well-behaved and sweet as could be.  Even her slightly crooked nose made her more endearing. She was also quite a little fighter. She fought her own battle with diabetes and helped me battle a year of breast cancer.  During that time, she was my reason for getting up every morning. Thank you Joyce for the love and the Expertise you put into breeding these wonderful little dogs.  You are able to create additional loving family members for us.  What a wonderful gift you have. Thank you again"

Now you must indulge me while I share some photos of the beautiful Piper.

Rest in Peace Piper. You were well loved and gave such love in return. I know Gail misses you so very much.

Please love them in return. They are with us for such a short time.