Tomorrow the countdown begins as the passing days take me ever closer to October 7 when three friends from Wisconsin and I head for New Mexico and the American Lhasa Apso Club (ALAC) National Specialty. Three of us are taking two dogs each. The other has three. (We are renting a BIG van for our trip.) Walker and Raven are going with me. Walker is entered in the Top 20 Competition, a Veterans Sweepstakes, and the Veteran's classes at the two ALAC specialty shows. Raven is being shown in the 9-12 puppy class in three shows.
To be honest, I have not packed a single item yet. However, I have multiple to-do and to-take lists lying around. Guess what I'll be doing this weekend?
Speaking of Walker. His 9th birthday was September 22. He is doing just great and looking as beautiful as ever.
I appreciated the September 25 blog entry at this address:  http://time4dogs.blogspot.com/2011/09/huffington-post-puppet-for-animal.html
The post was written in response to an article that described various celebrities jumping on the "mandatory" spay/neuter bandwagon and calling for federal regulation supporting it. I also found some interesting information not only in the article but also in the comments that followed that gave me food for thought on the spay/neuter issue. The ALAC Code of Ethics states, "ALAC strongly supports the practice of accompanying the sale of all puppies or adults sold as pet quality with a 'spay/neuter contract' stating that no AKC registration papers will be transferred to the buyer until the seller has received veterinary certification that surgery has been performed." So for years and years, that has been my practice and, frankly, the vast majority of puppy buyers expect it. Most comment, "Oh sure, we planned to do that anyway." But new data about health issues is giving many breeders pause for thought about what is best for our puppies. Like so many health-related issues in our lives, the key is obtaining good information through research and reading and honest discussions with your dog's veterinarian. Read the blog post and comment with your thoughts if you desire to do so.
At the beginning of the week, I attended Illinois' Sharing a Vision Conference. What a great three days of listening to early childhood professionals discuss issues related to children. I came away excited, educated, and revived! I was especially fortunate to once again meet Hedda Sharapan, a woman who worked with Mr. Rogers from the time he began the Mr. Roger's Neighborhood program. I was glad to learn that various episodes are available online at pbskids.org/rogers and at fredrogers.org and look forward to sharing them with our granddaughter. If you have young children or grandchildren and have fond memories of Mr. Rogers, then visit the websites with them. Mr. Rogers is timeless!
Great news awaited me at home when I looked at Facebook and discovered our son's metal band, Black Fast, had been named "Best Metal Band 2011" in the St. Louis area. The four band members are working hard practicing and writing music, making occasional appearances, and trying to promote themselves while at the same time holding down a couple of jobs and/or attending classes to finish degree work. An article in the St. Louis River Front Times said, "Black Fast's take on the genre is authentic but not elitist, referencing Iron Maiden's endless sweeps, Megadeth's hook-laden riffs and Mastodon's stoner-friendly structures. We'd be hard pressed to find a more purified source of metal in St. Louis, even if we melted down the Arch and sold it for scrap." Yep, I'm a proud mom!
Finally, Belle has been bred and we await the results, keeping fingers crossed that puppies will be born in mid-November.
I doubt I'll be posting again until after the specialty, so wish us safety as we drive to and from Albuquerque, as well as lots of fun, good times, and good fortune in the show ring that week!
Life is good when you have a Lhasa to love you!
Joyce
Posted by Joyce at 8:08 AM 2 comments:

Oh my goodness, the majority of us Lhasa people will be in an uproar for the next few weeks as we make travel plans and write list after list of items we simply must pack for the week-long events that constitute the American Lhasa Apso Club's National Specialty week.
This year's ALAC Specialty is being held at the Albuquerque Hilton in Albuquerque, NM. Events run from Monday, October 10 through Friday, October 14. The five days are packed with things to do. Here's a look at the schedule: 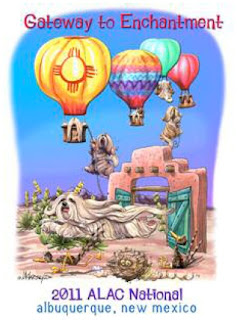 Monday evening is ALAC's first Top Twenty Competition. The twenty Lhasas with breed points earning them rankings from #1-#20 as of June 30, 2011, were invited to enter the competition. Each dog will be scored by three judges, yet to be named. One is an AKC judge, another a handler, and another a Lhasa breeder. The event includes a cocktail party and requires semi-formal attire (although I, for one, will be wearing practical shoes in the ring!). Spectators will also be voting for their favorites, with the winner of that ballot receiving the "People's Choice" award. I was thrilled when Walker received his invitation to attend. It sounds like fun!
On Tuesday, the Lhasa Apso Club of Central Colorado is hosting its specialty. Larry Bruton will judge the Puppy Sweepstakes and the Veteran Sweepstakes. I entered Walker in the Veteran Sweeps in the 7-10 year class. (His birthday is September 22nd. He'll be 9 years old!) Mr. Bill Lee will judge the LACCC Specialty. Raven is entered in the regular classes (Puppy Bitch 9-12). She will be not quite a year old at specialty time. Following the Junior Showmanship judging by Mary Schroeder, evening events begin. These include a reception, the rescue parade, and the Lhasa games, which are always good for fun, relaxation, and lots of laughs.
Wednesday may be a "day-off" for the ALAC's confirmation members, but it will start early in the morning for those involved in companion events. The day for Agility participants begins with an early morning drive to Los Lunas, NM, where the Agility Trial will be held, judged by Rene Fitch.  That afternoon, Janice Anthes will be scoring the performances of the Obedience and Rally participants back in the hotel's ballroom. Later that afternoon, Dr. Donny McGougal, will present the Anatomy seminar sponsored by the Breeder Education Committee.
Another new event for Wednesday of specialty week is ALAC's "Cut Down Sweepstakes." As the title implies, dogs entered in this sweeps must be clipped down, giving judge and spectators alike a look at the dogs' structures without the "interference" of the usual heavy show coat. Annette Rathbun will judge.
Wednesday's finale will be the much-anticipated Futurity, judged by Debbie Burke. The Futurity showcases recently whelped Lhasas (ages 6 – 18 months). The road to the Futurity begins shortly following the birth of a litter when the breeder nominates the litter for the Futurity within 90 days of birth. This year's participants were born between April 1, 2010 and March 31, 2011. The judge will award a Best Puppy in Futurity, chosen from the winners of four classes: Puppy Dog 6-9 months, Puppy Dog 9-12 months, Puppy Bitch 6-9 months, and Puppy Bitch 9-12 months.  Best Adult in Futurity is chosen from among the winners of four classes: Adult Dog 12-15 months, Adult Dog 15-18 months, Adult Bitch 12-15 months, Adult Bitch 15-18 months. Once the two "Bests" are chosen, those two compete against each other for the title "Best in Futurity."
On Thursday, Barbara (Bobbie) Wood judges the ALAC Midwestern Regional Specialty. Again, I have Raven entered in the 9-12 puppy class and Walker entered as a Veteran. Following judging, ALAC will hold its annual business meeting. The Awards Banquet follows. A highlight of the banquet is the video showing the Lhasas who have earned titles in 2010. I sent in photos of both Mira and Zach. Mira finished in March 2010 and Zach in December. After the banquet, ALAC will hold an auction of donated items.
Friday! (Are we tired yet?? – remember that somehow amidst all these meetings and events, dogs must be fed, pottied, groomed, bathed, dried, and prepared for the ring – oh and so do the people!!). Friday begins with the Judges Education Committee presenting the Judges' Seminar as well as the educational seminar for ALAC members who wish to be on the list of approved mentors for judges. Prior to the National Specialty judging, which begins later that morning, there will be a Parade of Titleholders. Betty Leininger will judge the National Specialty. Raven and Walker are entered. The conclusion of the judging marks the official end of specialty week, but much work is left for the (I'm sure by now) exhausted show committee members, other ALAC volunteers, as well as attendees—and their dogs!
Friday night is for relaxing, packing, loading the car, biding good-bye to people we get to see only once a year, and getting some sleep before dawn breaks on Saturday when we'll be loading the dogs and the last of the "stuff" into the van and heading back to the midwest for the 2-day trip home!
It'll be a great time. If you love Lhasas and need a vacation in the southwest, you should pack a bag and join us. Only at the National Specialty will you get to see so many Lhasas from all over the country gathered in one place. You can meet breeders, attend the events, and join the fun. It's always a great time. All Lhasa lovers are welcome!
Life is good when you have a Lhasa to love you!
Joyce
Posted by Joyce at 9:28 AM 1 comment:

Penny's breeder, Jude, was kind, so very, very kind to Erikka when my daughter was looking for a puppy and a big sale was on the horizon. She even sought her out to let her know a puppy was available. Being raised in a dog showing family as she was, Erikka maintained a relationship with her dogs' breeders. All was friendly until Jude found out Erikka opted against surgery for the two clean breaks in Penny's legs. Following Penny's injury the tide turned. This is only one example indicative of the kinds of pressure and vitriol Jude  subjected my daughter to, both by phone and by email. In the end Erikka was beaten down and gave up. At Jude's insistence, Penny is now back with Jude. You and I might disagree with her decision but you have to understand that she is alone in FL and despite the support and advice I gave her via phone, no one was there to help her stand up to the venomous treatment she received. Hindsight is 20/20. I should have been there.
Labor Day weekend was uneventful. Yesterday, I had oral surgery. Today I am resting, hurting, and taking pain meds that I wish had more codine in them!
Dog-wise, we have a girl in season, and we are planning a breeding. If all goes well, we will have puppies again in mid-November.
So that is the news from here.
Joyce
Posted by Joyce at 1:07 PM 3 comments: