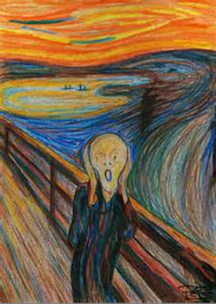 “One of the biggest disadvantages of being grown up is seeing the time rush by faster.” ~ Pawan Mishra, Coinman: An Untold Conspiracy

See the photo of The Scream to the left? Well, that is how I have been feeling this month. So much to do, so little time. Add in some stress and frustration...

I do not know where June went. I had intentions of posting to the blog for Father's Day. That day came and went.

Here is the quotation I planned to use, just so you know I actually had plans: "I believe that what we become depends on what our fathers teach us at odd moments, when they aren't trying to teach us. We are formed by little scraps of wisdom.” -- Umberto Eco

May and June were months of chaos here, as nearly every one of our girls came in season and all the males have been in a constant uproar. Those of you who have been waiting for news of puppies, keep your fingers crossed that the two breedings we did result in pregnancies. Puppies should be due around the first of August if all goes as planned.

Did I tell you that I retired January 1? You could not prove it by my June schedule. I was (still am after returning to work part time) the Associate Director for an office that runs completely on grant funds. Our Fiscal Year 2016 funding ends June 30, so we've been busily working all month submitting budgets, work scopes, and narratives for continuation funding for FY17. The stress came because our university's deadlines and the funding agencies' deadlines are not the same.

My June weekends have been full also. The first weekend I drove to Cincinnati and back in one day to pick up two Lhasas (Shadow and Windy) from Mike Lucas. Mike's wife, Marilyn, long time Lhasa breeder and exhibitor, passed away in March. Shadow (Ch. Cozmos Chiennoir) stayed here with me and the following weekend I made another long drive to deliver Windy to her new owner. Both girls are doing great in their new homes.

My granddaughter came to spend a week with us. It was great, but the poor girl had to spend some time with me at the office. Boring. Poor thing. I'm sure that is not what she had planned for her week at her grandparents. (We made time for some fun activities too!)

I did make time for a dog show in Ft. Dodge, IA, last weekend. I entered Greta to give her some more ring experience, hoping so much that maybe this time she would get her tail up and have fun in the ring. Mary entered Riley, Joyslyn's Wind of the Spirit, who is Greta's older full sister from an earlier breeding between Duncan and Windy. Mary was hoping that Riley would get the last point she needed for her championship.  Mary got what she hoped for. Riley beat Greta both days. Now Riley is Ch. Joyslyn's Wind of the Spirit.

Riley's championship means that her mom, Windy (Ch. MLS Dakota Dancing in the Wind at Joyslyn) now has enough champion offspring to qualify for her Register of Merit award from the American Lhasa Apso Club.

Although I did not get completely what I hoped for at the show, there was a glimmer of light at the far end of the tunnel. Greta held her tail down when she was in the class by herself. When she was in the Winner's class and behind Riley, she did get her tail up after a few steps. That is encouraging. I guess I am not as patient as I used to be. I keep wondering that if she is so unhappy in the ring if I should just give up. I'm not quite ready to do that yet.

Other Joyslyn kids are doing well in the ring. Cinder, Joyslyn MLS Dakota Windy Winter Night Mon Ami, owned by LaVonne Bennett and me, has been doing well at shows lately, taking WB earlier this month at a WI show and again yesterday at a MN show. Cinder is a full sister to Josh (GCh. Joyslyn MLS Dakota Wind Breaker). Here are some pictures taken at the grooming set up yesterday before and after her wins.

Cinder's daughter, Mon Ami N Joyslyn's Shades of Summer (Misty), bred and owned by LaVonne and me, took Reserve to her mother, Best of Breed Puppy, and Non-Sporting Puppy Group 3 at the same show. 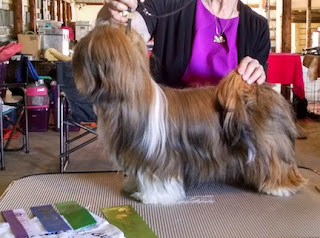 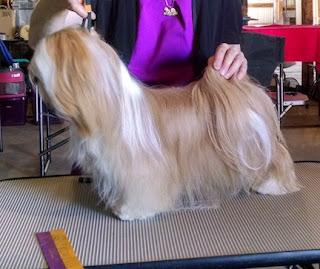 Thanks, Karen, for sending the photos and show results.

I'm stuck at home this weekend! Ho-hum!
Next weekend, however, is the much anticipated Kettle Moraine show. The Greater Milwaukee Lhasa Apso Club is hosting two specialties. I have entered Jenna one day and Greta the other day. Keep fingers crossed that Greta relaxes and gets her tail up.

I found this great quotation about dogs that I want to share:
"We give dogs time we can spare, space we can spare and love we can spare. And in return, dogs give us their all. It’s the best deal man has ever made." – M. Acklam

Mary Reese send me a link to a video of Joyslyn's Beauty Secret (Belle) during an agility trial.
https://www.youtube.com/watch?v=4FIA3-9z_E0&feature=youtu.be
I really like watching her go up and over the A-frame. This is the girl that hated the show ring!


Sad news came from Shannon: "About 14 years ago we came to pick up our puppy from you. Her name was Mia. We had to say good bye to Mia this past Friday and it was one of the hardest things we've ever had to do. She was raised with my 4 children and loved by them so much. She will forever be in our hearts. I wanted to say thank you for letting us be a part of her life, she was a wonderful dog and will be greatly missed." 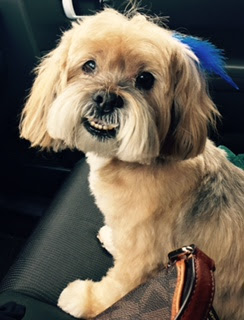 Kristi send a cute photo of Vader, who is a litter brother to our Kimmi. 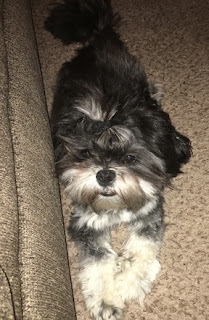 As I look ahead, July and August calendars already look as crazy as June's was. I suppose it keeps me from being lazy! I am especially looking forward to the Burlington Kennel Club's July dog show which is going to be held in Macomb this year on the campus of Western Illinois University, only 6 blocks from my house!

And what is so rare as a day in June?
Then, if ever, come perfect days;
Then Heaven tries earth if it be in tune,
And over it softly her warm ear lays;
Whether we look, or whether we listen,
We hear life murmur, or see it glisten...
~James Russell Lowell

In one of his books, Dr. Seuss wrote, "How did it get so late so soon?" I'm feeling like that right now as I think about how five months of 2016 are already history. How did we get to the 6th month of the year so quickly?

At least being able to look back at my blog posts I can sort of keep track of and recall some of the highlights of those five months!

Last weekend's shows were a combination of ups and downs. The ups included Kimmi taking Select Bitch and earning two more points toward her Grand Championship. She also took Best of Breed Owner-Handled each day. On Friday, she placed second in the Owner-Handled Non-Sporting Group. She placed fourth in the Group on Saturday, and did not place on Sunday. Here are some quick photos taken of Kimmi with her ribbons after we got back to the grooming set up.


The downs were a result of Kimmi deciding she did not want to show. She was such a disappointment and frustration the entire weekend. It was very disheartening to say the least. She was spooky in the ring, held her tail down, and just plain gave up on me. The fact that she placed in the Groups is, I suppose, a testimony to her conformation because she certainly did not place because of her excellent showmanship.

Every once in a while a dog comes along whose job, I guess, is to make me humble. This time I have two of them working on that for me! Sheesh...

Jenna's performance was an "up." Friday was her first show. She walked around the ring with head and tail up and acted like an old pro. Saturday she knew what she was doing and charmed the judge into giving her Winners Bitch and the point. I was elated! She had just turned 6 months old on May 22.


Another "up" was Riley taking Winners Bitch on Sunday. We were hoping she would win both days because then she would be a champion, so I guess you could say that Jenna's Saturday win was both an "up" and a "down." The judge told Mary he just "had taken a liking to the puppy." Riley just needs one more single point to be finished.

Once again, my thanks to my Shiba Inu friend, Jane Chapin, who helped me at ringside and took the pictures of Kimmi and Jenna.

Jane and I often travel to shows together, sometimes in her van and other times in my car. From 2000-2014 I had a series of three Impalas. They had huge trunks, and I was able to easily load all my dog show "stuff" in those trunks, often amazing passers-by as they watched me load or unload the many items I'd brought along. Then when the new model Impala's came out, the trunk capacity stayed the same but the configuration differed and, try as I might on the new Impala on the lot, I could not get all the stuff in that trunk! Darn!

The poor salesman just could not quite understand why I was so focused on the trunk! He kept trying to show me all the bells and whistles inside the car. His sale was foiled by a trunk. That probably had not happened to him before!

So I went to the Ford dealer next door and bought a Taurus -- but only after carefully examining and measuring the trunk! (He also thought that was a bit over the top, but he went along with it. Hey...anything to make a sale, right?). This all happened in 2014. I can get many things in that car's trunk. Here is the proof. Jane took photos as we packed to go home.

We had two people, four dogs in plastic crates, two suitcases, two garment bags, two make-up bags, two bags holding dog food and dishes, two gallon jugs of water (mostly empty by Sunday), two small coolers, my bag that holds my water bottles and a couple of coat conditioner spray bottles, a bag of towels and crate pads, four wire crates that fold up, two plastic storage tubs, three ringside tables, one grooming table, two stools, two fans, a bag full of three crate fans, two exercise pens, two ex-pen mats, two grooming bags full of (you guessed it) items needed for grooming, the crate trolley, a fold-up chair, a small bag with a long extension cord in it, and a bag full of bungie cords. There might have been more, but that's all I can recall at the moment.

And here are the pictures:

On a different topic, if all goes as planned and if Mother Nature cooperates, we should have a new litter by the first week in August! At last!!! Keep your fingers crossed that the breedings were successful.