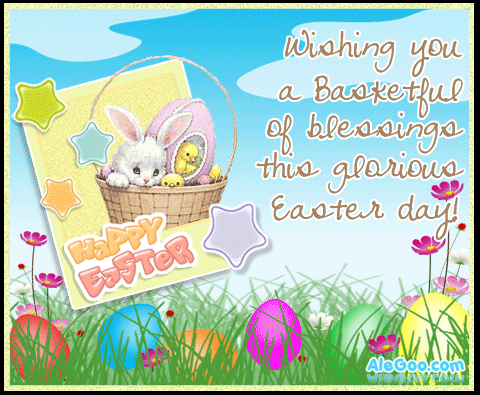 May God continue to bless each and every one of you!

I'll check in again soon, after the show this coming weekend! What I've Been Up To

Hello! It's been a while, I know. The last few weeks have gone by like a whirlwind, and here it is March 11th already! I have not been idle. I mentioned in the last post that I'd been traveling to visit friends and family. I'd visited our son, Trevor, at the end of January. In early February I went to Iowa to visit Aaron, Amanda, and granddaughter Klara.

Aaron is quite artistic. He games, and one of his passions is painting miniatures. He is meticulous with his art - definitely a perfectionist. Here is a photo of his Kharn the Betrayer. Kharn is 28mm (about 1 1/16 inches) tall.

On February 20 and 21, Josh, Duncan, and I went to dog shows in Des Moines. Many thanks to Shiba friend, Rebecca Powell, who showed Duncan for me. Duncan had not been shown for at least 18 months and he presented Rebecca with some challenges!

Josh is now a Grand Champion. He finished with 34 points  and four majors. I'm glad to have that out of the way.

The day after the show, I left for Florida to visit our daughter and her family. I don't know where the week went, but on the 29th I found myself back in Illinois, gearing up to go back to work part-time on March 1. One thing we did in Florida was visit the Miami Zoo. Here I am, feeding the giraffes. The zoo sold bowls of kale. The giraffes ate quickly and soon our turn was over. My 18 month old grandson had a great time feeding them. He was not at all intimidated. 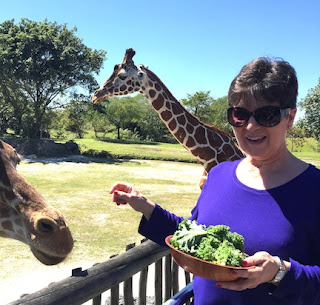 My granddaughter's teacher asked me if I would Skype with the class and read a couple short books in honor of World Read Aloud day. So before I left for Florida,  I packed my iPad and a couple of my favorite picture books, Martha Ann and the Mother Store and I Ain't Gonna Paint No More to read to the students. It was great fun for me and a nice surprise for Klara, who had no idea the guest reader was going to be her grandma. A few days ago, I received some wonderful artfully-decorated thank you notes from some of the students. 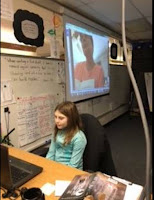 Here is a picture of me on the big screen as I was Skyping with the class. Klara was sitting in front of the computer screen so I could see her as I read.

We also took a trip to the Tampa area because Trevor's band was playing in Ybor City. My grandson and I stayed in the hotel while Erikka and Salman went to the show. (More about the band later.)

Work is going well. It's as if I'd never left, and after 26 years at the same job, getting back into the work routine was easy. Don't get me wrong: I absolutely look forward to my two days off each week!

Cindy wrote, "Charley is growing up so fast.  He continues to be a joy to our family.  He is sleeping through the night and potty training is going ok. Challenging etc." She sent a photo of Charley. 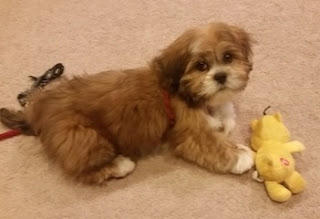 Kathy wrote, "From all of the other owners’ comments regarding THEIR Lhasas (for as far back as I can read on your blog), Sophie sounds like all of them, rolled into one!  Puppy Kindergarten is going well.  She is still doing just as well as the labs and shepherds in the class, and she is showing them all that she is not intimidated by puppies two to three times her size!" 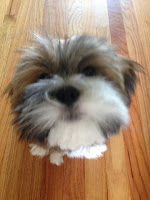 Denise wrote, "Hi Joyce. Just wanted to share this photo with you! Our Duncan is 17 weeks and such a character. He is so much fun...loving and spunky! He is still holding on the  chance he may become top dog in the Armstrong house lol.... Lily may be almost 10 but she is not giving up the crown. As much as they scrap with each other, the next they are laying next to one another."
Denise sent this cute photo of her Duncan:


Joe sent a photo of Abby, but no note. Abby seems to be begging to be put in the suitcase so she can go on the trip too! 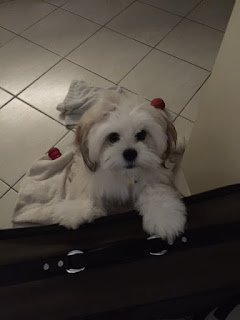 The Strongs sent a note and a photo of their Luther. "Hi Joyce.....hard to believe Luther is 10 months old! I need some advice. His coat is sooooo thick and seems so dry...I have a conditioner I spray on, but it doesn't seem to do much good." 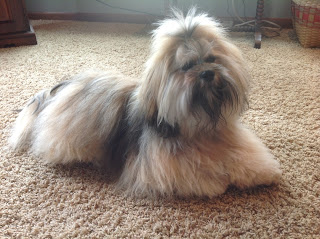 I suggested that she try coconut oil on his food.

When Cindy mentioned Luther was 10 months old and, having recently faced Kimmi's (his litter sister's) coat change, I thought I should revisit for everyone some information about Lhasa puppies' coat change. This is especially good information for people who are new to the breed. First, I cannot emphasize enough that when you first get a puppy, you need to start training it to be groomed. Even if you do not plan to allow the coat to grow to floor length, the dog still needs to learn some manners when it comes to being groomed.

As far as coat change is concerned, here are some things to keep in mind:

The puppy's coat change can happen anywhere between the ages of 9 to 14 months. Since individuals differ, the time frame may also vary somewhat: some Lhasas may begin as early as 6 months, while others may hold off until 16 months. One thing you can be sure of, unless your Lhasa puppy has a really sparse coat, the coat change WILL happen.

Remember, a Lhasa's coat does not shed as most other breeds' coats do. What happens during the coat change is that the softer puppy coat is being replaced by the harsher-textured adult coat. As the adult coat comes in, the puppy coat "dies" and needs to be brushed out or it will tangle and mat terribly. At this time, your puppy may need daily grooming to remove the soft, "dead" puppy coat. You will be surprised at how much loose coat can be brushed out during coat change time.

When the coat change does begin, don't get discouraged. It usually lasts less than a month. Set aside time each day to groom your Lhasa. If you don't have time to brush him completely each day, then at least do some spot grooming in the troublesome areas (neck, insides of legs, behind the ears) on a daily basis. Don't go longer than two days without a complete brushing, though. Those darn mats surprise you -- a puppy may not look matted, but his undercoat may be a real mess. Watch for and take care of tangles and mats as they appear, and do not put off grooming, thinking the mats will disappear by themselves (they don't!).

Finally, don't be discouraged; just hang in there until it's over -- the coat change period really does end, and the harder textured adult coat will be easier to deal with.

Pictures of My Puppies

Kimmi, Greta, and Jenna all had baths Wednesday night, so I thought that would be a good time to take photos of each, since it has been a while since we've taken and posted pictures.

Kimmi is now 10 months old. She's looking good and I'm looking forward to getting back in the show ring with her at the end of this month. Wisconsin, here we come!


Greta is about 4 and a half months old now.

I called Jenna my "Ugly Duckling" because I always hated the photos of her as a young puppy. We never could get a good one. She is definitely turning into a "Swan." Whew!!

Black Fast, the band for which our son Trevor plays guitar, has been on tour since mid-February and the tours will continue with a week or so off occasionally through May (and maybe beyond -- nothing has been scheduled yet after May). 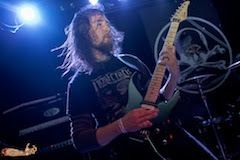 The photo of Trevor was taken by Sinestra Studios. More of their photos of the band members are available by clicking here.

They are getting good reviews. For example here is an excerpt from one:

"As an old curmudgeon metalhead, I have to say that I was more than impressed. Black Fast has that charisma, charm, integrity, and fire that I love to see in a band of any age. It is very obvious that Black Fast is out to conquer and if they keep doing things the way they are doing, they will definitely leave their mark on a genre that so desperately needs something refreshing. What I loved the most about Black Fast is that they kind of proved me wrong. Black Fast also reminded me that even in the more extreme genre, a band can still do something that tugs at my heart strings and makes me believer. All in all, Black Fast is a young band that is very quickly picking up momentum, turning heads, and proving themselves as a touring band to be reckoned with."  ~excerpt from review of Black Fast's performance in Atlanta by Don de Leaumont


Thanks for checking in -- and reading this whole post!  'Til next time!