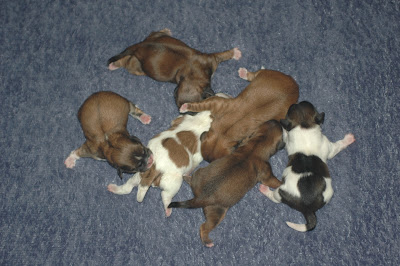 I'll try to post pictures each week, as usual. 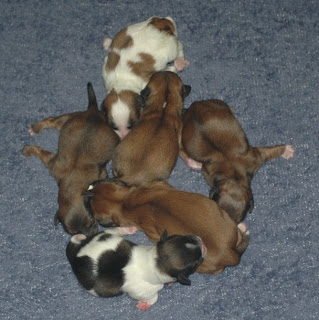 Your Laugh For the Day

I just had to share this picture of Maggie with her favorite toy. We call this little green alien her "baby" because she carries it all the time. Seeing her with it in the upright position cracks me up! We were finally able to get a picture. Usually she drops it when she sees the camera.

I hope it makes you laugh too!

If I thought I could get her to carry it in the ring, I'd give it to her. We all need a good chuckle and this would do it for sure! 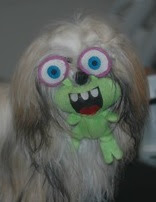 Pictures from the Past

I have had a busy November and remarked to a co-worker today that I have not been in the office a full week yet this month! I left on the 4th to go to Florida. I was back for one day on the 11th. This week I was in Chicago for meetings Tuesday - Thursday. Next week, we are open only 3 days. And Christmas is getting closer and closer...

Here are the promised photos from the National Specialty. I am missing the photo of Walker, taken after the Top 20 competition. I received a photo of another person's dog so imagine someone else received mine. If I ever get it, I'll post it also.

Enjoy the photos and enjoy Thanksgiving. I hope you each have long, long lists of blessings to count. And I hope at least one of those blessings is a Lhasa Apso.

A Vacation and Puppy News

The morning of November 4 found me driving to Bloomington to catch a plane to Chicago and from there another to Miami to visit our daughter. The Miami weather was much nicer than the Macomb weather, that is for sure! However, it did rain a couple of the days but that did not dampen my vacation spirits. The trip was fun and restful and, of course, it was delightful to be with my daughter again. I'm posting a couple of pictures just to prove I was there!

The trip home was "something else!" It began routinely, but perhaps 15 minutes into the flight, the captain told us we'd have to go back to Miami because there was a mechanical problem. One of the cargo doors had not sealed properly. But first, we had to fly around for a while to get rid of fuel since we were too heavy to land. Long story short: I missed my connecting flight and had to spend Wednesday night in Chicago. The airline (American) was very gracious. By the time we landed (from boarding to landing, I was on that plane 6 hours and 50 minutes), the staff at the gate had us all re-ticketed for Thursday flights and gave us vouchers for hotel rooms, dinner, and breakfast the next morning. I'd packed my coat in the luggage I'd checked, which turned out not to be such a great idea! Fortunately, I was wearing a sweatshirt, which helped a little, but not much, as I waited outside for the hotel shuttle Wednesday night. Thursday's flight was uneventful, as was the drive home.

That "delayed flight" experience was a far cry from a previous overnight in Chicago when a flight was canceled and a couple of my co-workers and I were stranded at the airport on cots! It was an adventure we laugh about now. It wasn't much fun at the time.

While I was away, Belle had a vet visit to determine if she was carrying  puppies or not. The disappointing answer was "not." I suspected as much, but held out hope that perhaps she was carrying one or two. No such luck. As those of you who read this blog regularly know, Belle does things her own way and in her own time! I suspected she was not pregnant and since this is the second time she "missed," we've decided that motherhood is not for her. She is still in full coat and beautiful, and one of these days I'll get a call from the right family who wants Belle to live with them. She is beautiful inside and out.

Other news, although not "officially" confirmed as yet by ultrasound or x-ray, is that Dancer is pregnant. Her puppies are due around Thanksgiving. I'll keep you posted.

The pictures have arrived from the specialty. I just need some time to scan them and post them. That won't be today. As you all know, the problem with taking a vacation is the work that awaits you when you come home! I have dogs to groom, bills to pay, groceries to buy, laundry to do, etc., etc... you all know what it's like! It's a good thing I took pictures or I'd be wondering, "what vacation?"

Joyce
Posted by Joyce at 6:15 AM No comments: