Puppy Photos and Letters from Friends 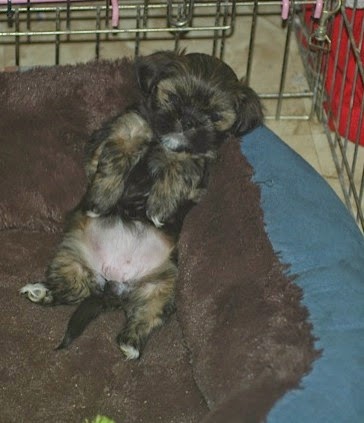 This morning when it was time to go to work, I had to put the puppies back in their pen for the morning. They'd been running around and, all tuckered out from their play, they all ended up in a pile on the dog bed. One by one, I picked them up. Under all the rest, I found little Coco, just chillin' out, with eyes half closed. She did not even move when I went to get the camera!

The puppies are now six and a half weeks old. Here are the weekly photos.

Everyone is using the piddle pads almost 100% of the time! They are enjoying their puppy food and, although eager to spend time with their mother, Windy soon tires of them and begs to be rescued. They mob poor Windy! They still sleep a lot, engage in minor puppy battles which seem to tire them out, and enjoy investigating the many toys that cover our family room floor. I seldom bother picking the toys up any more. What the older dogs don't drag out again, the puppies do!

I received some nice emails this week from people I had not heard from for a while. I tried to notify everyone on my contact list for our previous email account that we'd changed email addresses, and many responded with notes about their dogs.

Angela wrote, "Loki is doing well and has the text book Lhasa temperment.  She requires reminders that she is not the head of house every once in a while but for the most part is a source of laughter and joy.  Her favorite thing in the world is to take one of Kramer's extra large toys away from him and drag it to her bed.  Kramer has been trained that she is the boss of him so he just lets her do it but he will run over to the door and start barking which distracts her and he steals it back.  The two of them will go at this for hours! Kila is always happy and bouncy.  She only barks when Loki tells her too and has no idea what she is barking at." Angela went on to say that she has some concerns about Kila's back legs and is taking her to the vet soon. Loki and Kila are Lhasas. Kramer is Boerboel, a breed originally from South Africa, bred as guard dogs. The Boerboel was recently recognized by AKC. You may see one if you watch the group judging for the Westminster Kennel Club show next week.

Marsha, who has Jimmy, Duncan's litter brother, sent me an update: "He is very loving and loves to play with me and his toys. Also loves to watch squirrels,birds and rabbits in the yard. He is happy in the house or yard as he seems to be secure there…He is very sensitive to anything new or changed in the house.  We celebrated our joint birthdays on January 23, guess he's my soul mate."


I'd heard that Judy's dog, Odie, had done well at a recent agility trial, so was glad to get her email about her Lhasas. Ty and Izzy are the two she bought from us. She wrote, "Odie and Ty were the only Lhasas there. Odie was a rockstar scoring 100% on jumpers and weaves and earning his third leg on Saturday. He moves up to open competition.  On Sunday, he earned his first leg in novice standard. That's only the second time he was entered in standard. He scored 95% with my mistake. He loves standard because of all the contacts...Ty is such a character! On Saturday I only planned on jumping him on the first seven jumps and he did fine. On Sunday the start line was very close to the area where everyone sits…Well he stood at the start line and only looked at the crowd. He jumped the first jump and ran around the next two.  So last night at class he did everything because I had a net bag filled with liver sausage and smelling wonderful to him. I had to throw it as he jumped. He even did 12 weave poles for the liver sausage… Izzy is still a wonderful doctor and knows she is the smartest dog ever. She now loves to hid when it's time for everyone to come in at night. She peeks around the corner of the house, and thinks I don't see her.  She plays this game until I say good night, and then takes her time to come in."

I also received a brief note and this photo from Violet. Yogi is 12 years old now. A half-brother to our Walker, Yogi enjoys sleeping in the sun. 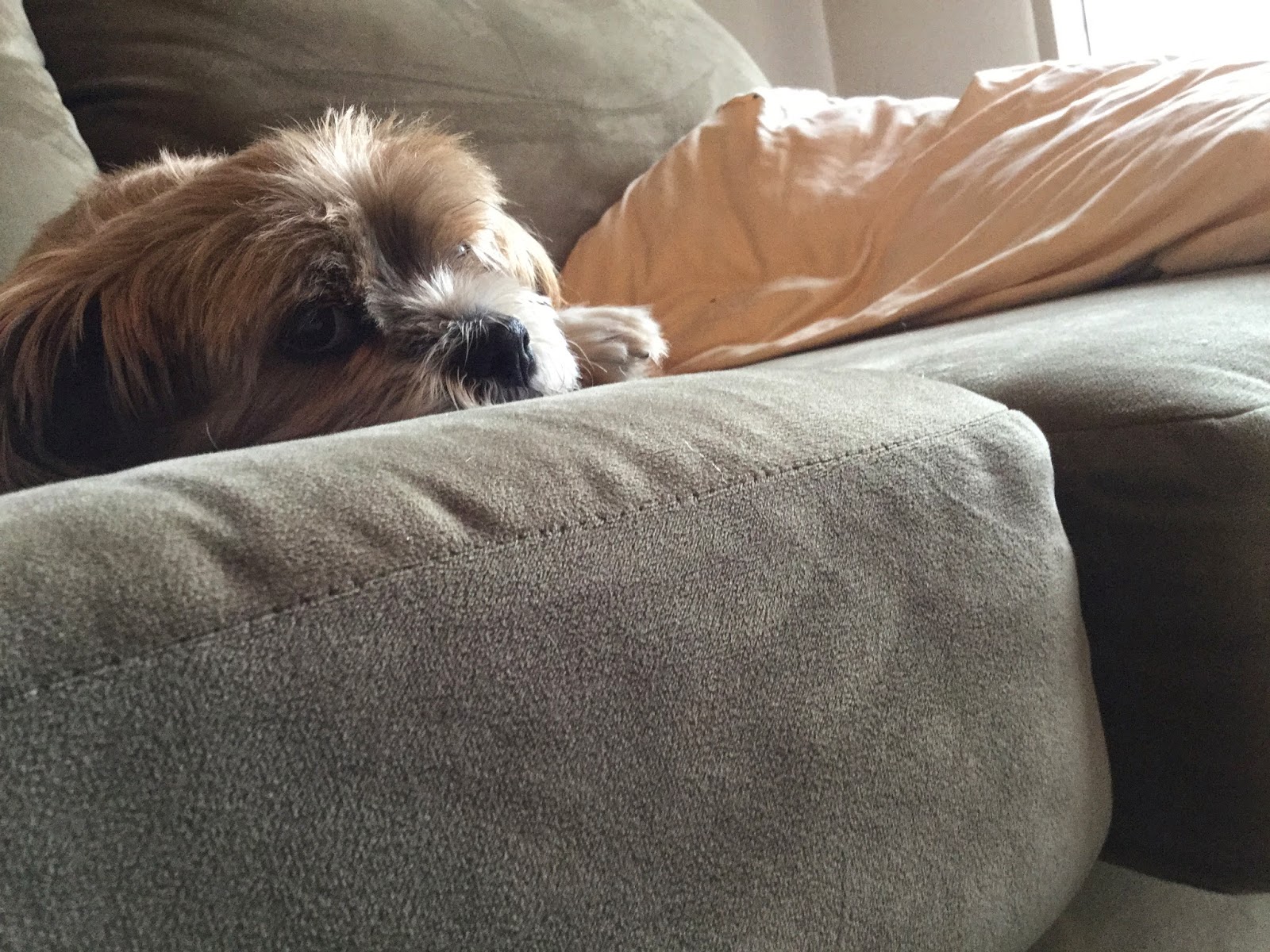 Happy Valentine's Day to all!