Quick Update and Some Photos 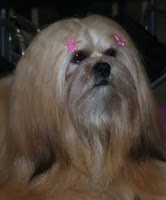 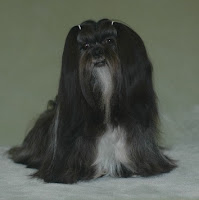 Dogs have given us their absolute all. We are the center of their universe. We are the focus of their love and faith and trust. They serve us in return for scraps. It is without a doubt the best deal man has ever made. ~Roger Caras


I hope everyone had a good Easter weekend. I certainly did. Saturday was spent at a dog show in DeWitt, IA, just a two-hour drive from home, so it is one of the closer shows I go to. Marsha was there from ND and it was great to see her and her three puppies who made their ring debut that day. Belle took Winners Bitch and got her first point, so that was a highlight. However, she refused to walk on the last go-round. She had had enough I guess!

I think it is time for Belle to go back to class.

The puppies Zach and Desi seem to be enjoying class. At least they are walking (are you listening, Belle?) and having a good time. Desi discovered a piece of bait another attendee dropped. She gobbled it right down and then spent the rest of class with her nose on the floor seeking more goodies, in spite of the liver I was using for bait. I don't know what goodie she discovered but it was better than liver to her taste buds!

Zach and Desi are teething. Gums are swollen and toothless, for the most part. Their teething reminds me of a picture I once received from a family who'd purchased a puppy from us. In the photo was a gorgeous dining room table. Its legs had been placed in colorful plastic sand buckets of the type children use at the beach. Funny! No caption was necessary.

Photos of Bell and Mira are at the top of the page. Mira is the black dog. Lynn sent Mira's photo files to Wal-Mart to be printed and when I went to pick them up, I had to swear that we took them ourselves and they were not copyrighted. I was irked but Lynn took it as a compliment.

Not much else is new around here. We are still (im)patiently waiting for Dancer to come in season again. My guess is that she is going to come in only once a year so it'll be July or August. I hope I am wrong!