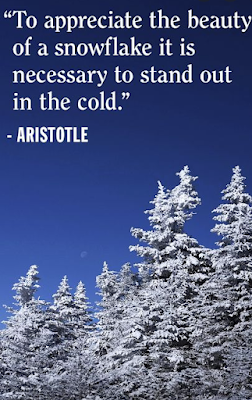 To be honest, as pretty as snowfall is, and as lovely as landscape is right after a snowfall, I hate snow. Or I should say that looking at it is not so terrible, but I hate the cold and the work and inconvenience that comes with snow: Scooping the porch and the driveway. Digging a path for the dogs in their outside pen. Defrosting the car's windshield. Trying to avoid the car skidding when it hits the ice. Hoping other drivers know how to drive on ice and snow packed roads! Winter around here is not for the faint-hearted!
My guess is that the many of you still reeling from the two big storms that have hit are feeling the same.
The nice thing about snow is that it melts. Of course, then we worry about rivers flooding!
My husband missed the big snow that happened hear this week. He spent this past week in Florida visiting our daughter and her family. His birthday and that of our youngest grandson are a day apart, so he went there to have a joint celebration.
Of course, he may have to dig his vehicle out of a snow bank when he gets to the airport tomorrow. He knew a big snow was forecast so took a snow shovel to the airport with him.
That left me, the dogs, and the cat to hold down the fort here at home, which was going quite well until the snow storm hit. We made it through with some potty schedule adjustments. The snow was so deep that I could only scoop part of the dogs' outdoor exercise area before I had no where else to put the snow. The clipped-down dogs got to go out for a quick potty once the snow stopped and I had scooped an area for them. Mostly, I was glad I had the exercise pen in the garage. What a time-savor -- no one came in from outside looking like a snowman/dog and I did not have to go outside. Win-Win.
So once again, I refer you this article about the benefits of using and exercise pen. If you have a place for one, use it! It bets the heck out of walking a dog in below zero weather!
An Article From AKC
I thought some of you might enjoy reading this article that was recently featured on the AKC website: "Ways You're Annoying Your Dog." Here is the link.

Puppy News
If all goes as planned, we should have puppies between end of February and early March. While I have enjoyed the respite between the litters, it will be nice to have puppies here again. I'll share photos as usual.

Notes and Photos
Jill sent pictures of Breaker and wrote, "Breaker would growl at the puppy in the mirror…he doesn’t anymore, but he likes the mirror. Now he lays in front of it and I put another mirror next to it and he watches me by looking in the mirror. It’s in the bedroom and he can see himself laying in his bed (crate)." 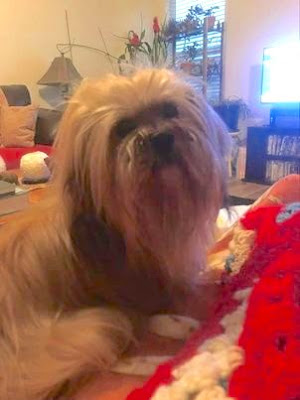 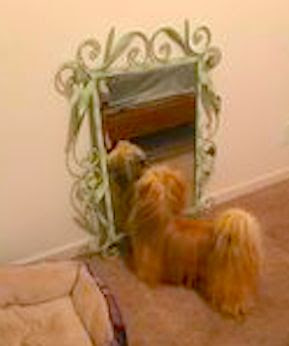 Nanda and Kris sent a cute video of Titan and wrote, "We are thinking about you today! Titan is turning 1! He’s happy, healthy and delicious! Thank you so much! We are forever grateful for this gift!"

Michelle wrote, "Hi Joyce! Hope all is well! We’re in the middle of the cold snap here, probably about the same for you! I’m not much for dressing up my dog except for a cute picture! But Sunny tried out his dog Helios suit on Tuesday the last nice day we had to walk, it’s a lightweight rain suit but it helped to keep his coat clean and that’s what I was hoping for when I bought it, he just gets so dirty." 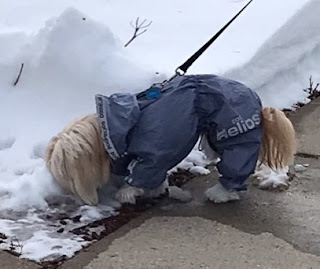 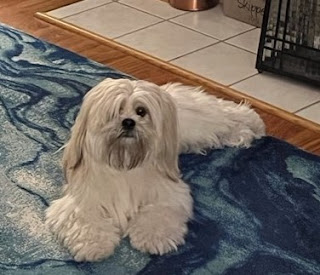 Sally sent pictures of Ginger and Jaxon and wrote, "They just came from the groomer so I guess they were seeing how good they each smell.😂 Jaxon's hair is even thicker than Ginger's!" 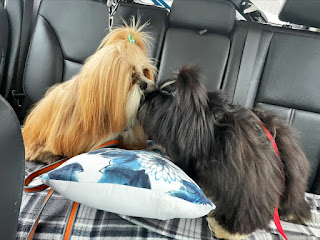 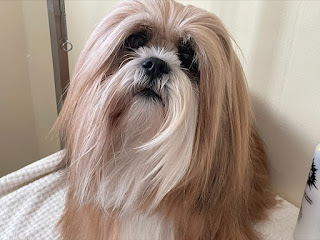 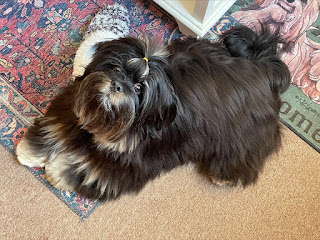 Violet sent this picture of her Shadow. 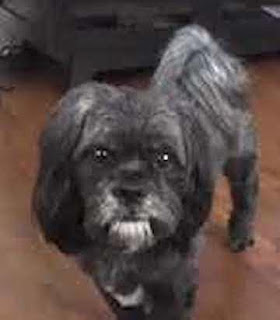 Ginny sent this picture of Maple say, "She's under there somewhere!" 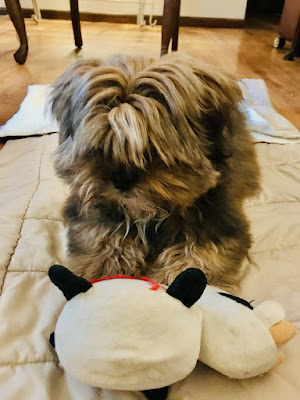 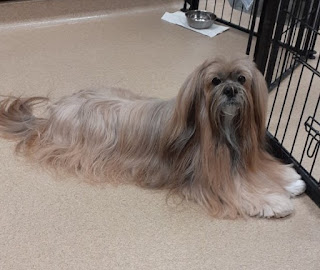 Debra sent this one of Seng Kye. 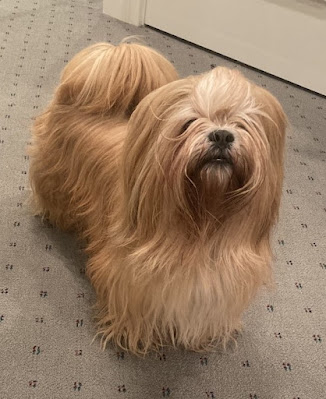 Judy wrote about Zoie, "Hi Joyce & Lynn! We wish you both a happy and healthy New Year. Our Zoie is doing well. Her toy box is overflowing since Christmas. I'm sure you've heard the saying "most dogs have owners, Lhasas have staff." How true! We love being her staff! She is so loving and loyal. She is so very smart. I am sending some pictures so you can see how much she has grown. She is really a wonderful watchdog. She loves people after she knows that they belong in the house.  We are so lucky to have her! Thanks again!" 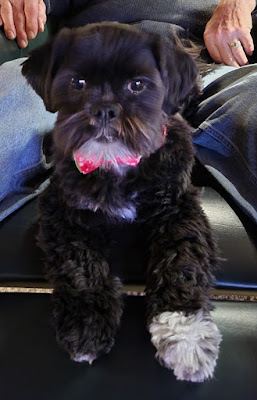 Thanks, everyone for keeping in touch and sending photos! I love getting (and sharing) them!
Shows
For many the dog show "season" never stops, but for us the 2022 show season has not yet begun. However, it will soon! I have entered Rusty and Pearl in shows in Des Moines, IA, in February and in Maquoketa, IA, in March. Rusty still needs that final single point. It seems like it has taken longer to get it than it did to get the previous 14! Pearl is a beginner and I have no idea how she is going to respond to the hubbub a dog show. I guess it is sink or swim. The weather has precluded us from going to a training class for the last 3 weeks. I've been taking her to the pet store to walk around.
If you live near either Des Moines or Maquoketa and  the weather is good enough for you to come to the show sites to see us, let me know and I will give you the ring times and numbers.
So that is the "not much" that is happening around here!
Stay safe -- and stay warm!
Joyce