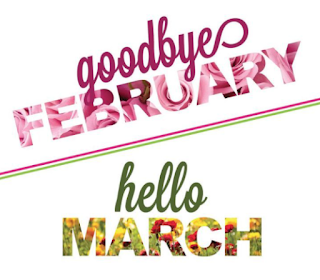 With rushing wings and gloomy skies,

the dark and stubborn winter dies.

As the title of this post says, I am sharing some good news today. First, I am happy to tell you that Millie is a champion! We attended a show in Des Moines last weekend and she earned the last point she needed for her championship title. Here are some photos of her. The first one is of her resting on the grooming table with her ribbons. The important one of the day was the purple one! The second photo is the official photo of her win. 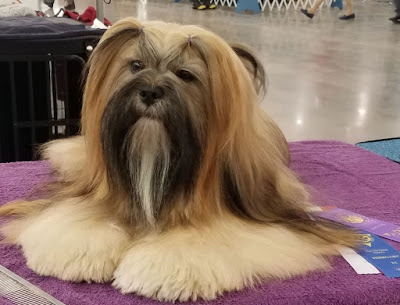 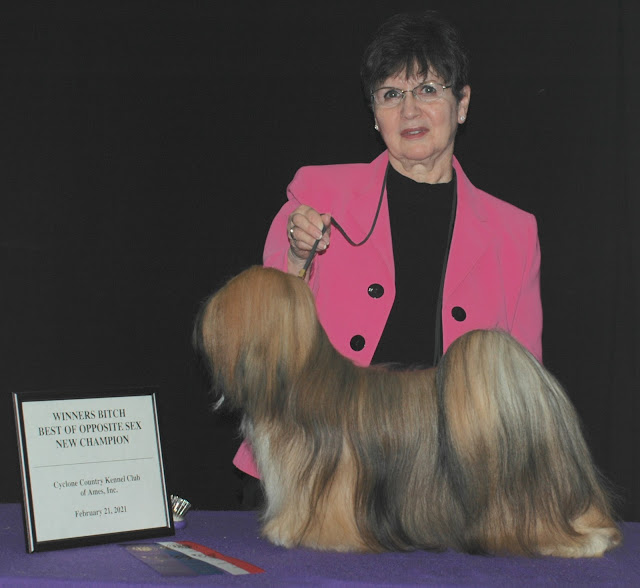 Here are two videos of Millie in the ring, taken by my Shiba Inu friend, Jane Chapin. In the first one, she is doing her "down and back." The second one was take of her in the Winners Bitch class.
The other good news is that this weekend, Gwen West's male, Joyslyn's Beethoven's Fifth West, won both of his majors, leaving him with only one point to go toward his championship. I am so very proud of this boy. He is Gwen's first show dog and I know she is bursting with pride also. He is being shown by handler Sue Cannimore from MS. 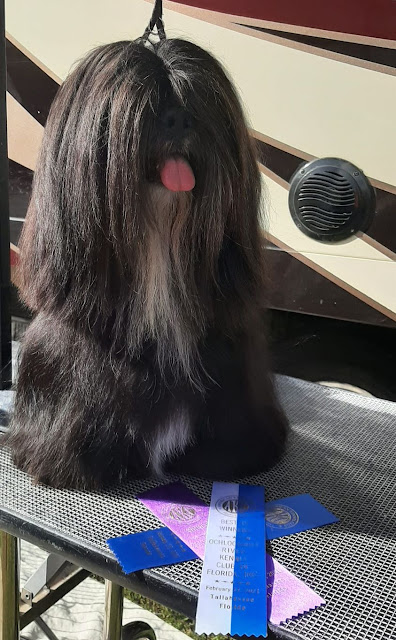 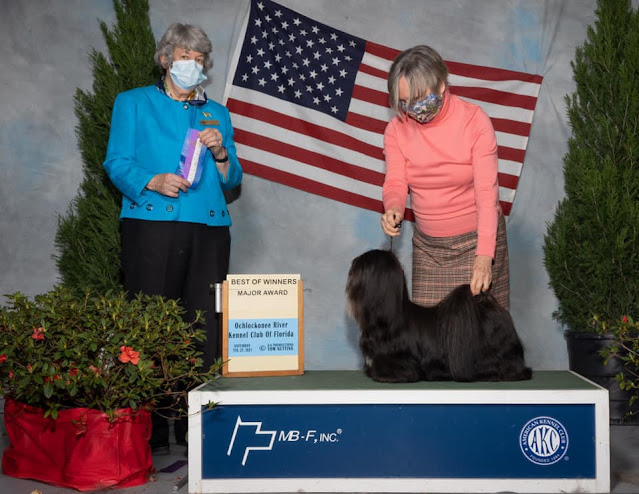 Here are Millie's and Beethoven's recent rankings. Millie's ranking is for the National Owner Handler Series. Beethoven's is a breed ranking. 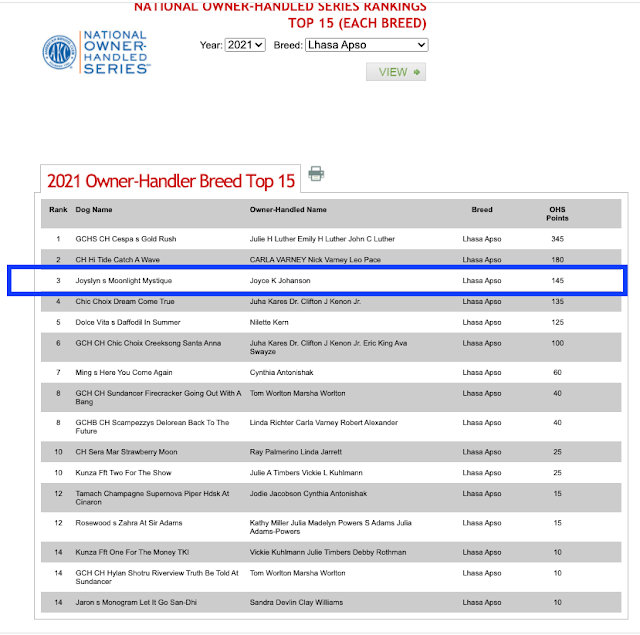 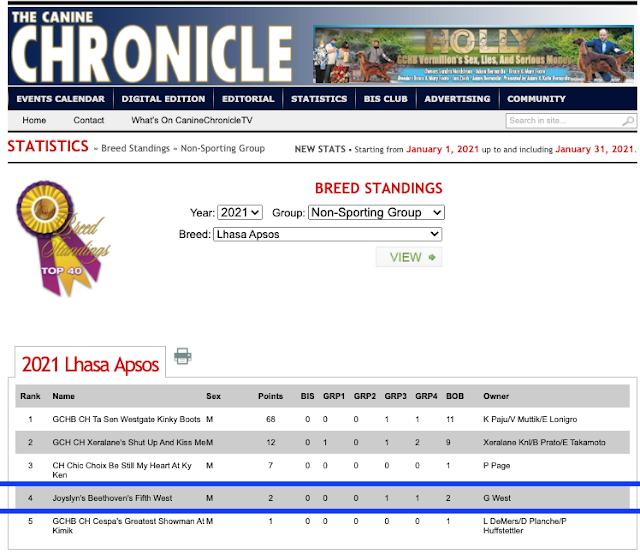 Millie and Beethoven are related. Those of you who have our puppies may have relatives also. Beethoven is a Luna son (CH Joyslyn JaMa Dancing By the Light of the Moon, ROM). As such he is a litter brother to our Bekka, Gabby, and Chance (CH Joyslyn's Moonlight Beckons, CH Joyslyn Golden Tu Karlyn Fire N Ice, and CH Joyslyn's Moon Shadows).
Millie is a Bekka daughter. The current litter of puppies are Bekka offspring also.
Also shown at the Des Moines show was our Archie. That dog is going to worry me crazy. He is pictured chilling out on the ringside table before we went into the ring. He was as "cool as a cumber" as he waited for his turn. 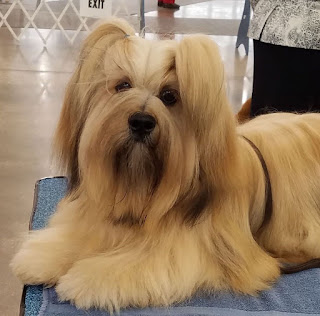 However, as soon as I picked him up and took him to the ring, he started shaking. He was in the ring alone and did not move with his tail up. (For those of you who do not show Lhasas, that is a huge no-no.) However, when we went back in the ring for Winners Dog competition, he was behind another dog and he DID get his tail up (Hurray!); however, he was so excited that he was not moving smoothly but "charging" to catch up to the dog ahead of him. Evidently God sent me this dog to teach me patience. Or maybe humility.

Photos of What I Hope are My "Up and Comers"

This photo is of Emmy (Joyslyn's Embrace the Wind). She will be 5 months old on March 8. 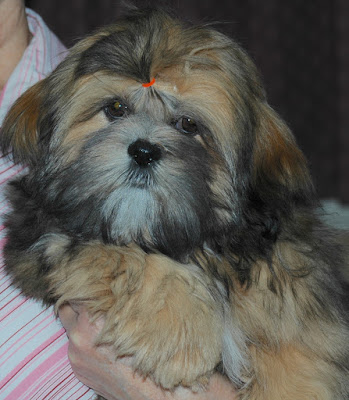 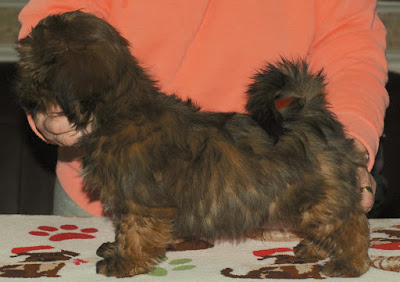 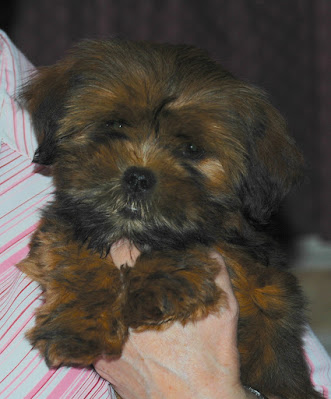 We took photos of the Bekka and Josh kids today. They are 5.5 weeks old now and into everything! In order of appearance: Gidget, Mel, Titan, and Molly. 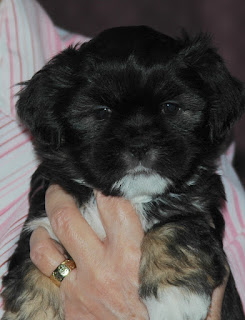 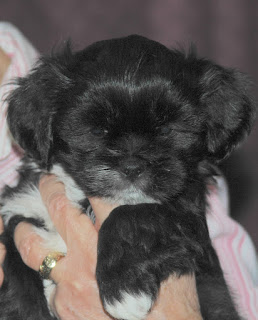 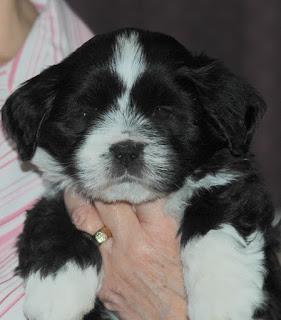 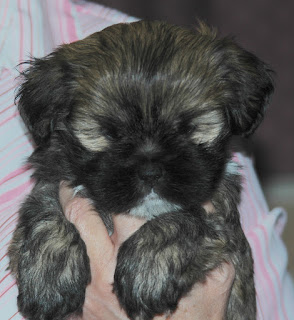 How I Decorated My Utility Room

I have stacks of dog show ribbons in boxes and hanging in closets. The rosettes are especially nice and for years I have had some hanging on the door between our family room and the utility room. 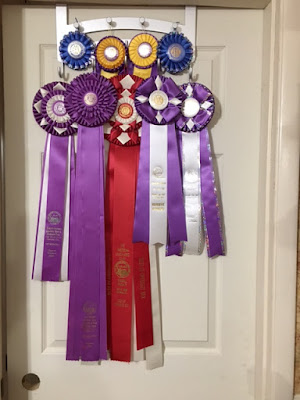 Then a couple days ago, I was rummaging through some boxes and thought it was a shame to be hiding all those pretty rosettes. Then I had the brainstorm of decorating the ugly pipe in our utility room. So I bought some Command Strips and went to work. Here is the result. 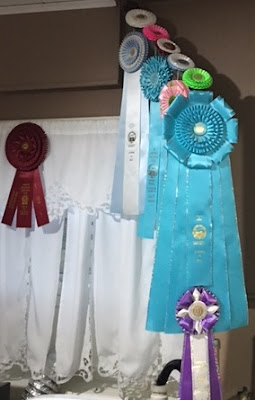 Granted, no one sees them but us, but at least I no longer have to look at that bare pipe. I still have a lot of rosettes hanging in the closet, and I am saving ribbons and thinking about decorating the Christmas tree with them next year.

A Few Notes and Photos from Others

First, this photo is one I found as I was looking through some old picture files. I thought you might find it interesting too. It shows Lhasas in 1934. 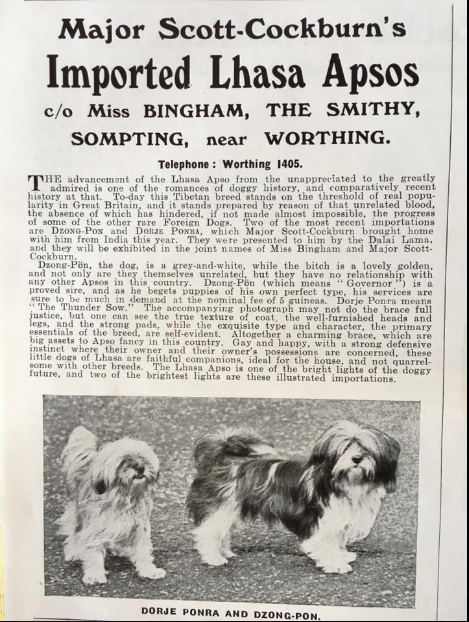 Ted from Canada sent me a note because I was complaining about the cold weather! "I couldn’t help but respond to the various individuals complaining about the cold weather in your area (minus 5-minus 10). I have an open invitation to all of your responders to pay Friendly Manitoba---Canada a visit and see what REAL cold weather is all about. We just finished a BALMY minus 25-35 degree weather with a wind chill that makes the temperature (if you are stupid enough to stand in the wind) close to minus 49 degrees. I couldn't find a photo of Lucky romping in the snow, but he loves the cold weather must be his heritage in Tibet. Keep Smiling as Spring is just around the corner."

I told Ted I was happy I did not live where he did! Those Canadians have to be hardy!

See...It's all relative. The day it warmed up to 45 degrees here, some of our university students were walking around without jackets. Had it been 45 degrees in September, everyone would have bundled up in winter coats!

Violet sent a photo of Shadow bundled up against the cold. He is another of the Millie, etc. littermates. 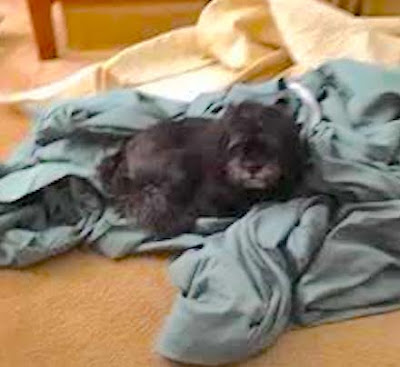 Renee sent photos of Jett and Dalai as they were at sea watching for whales. 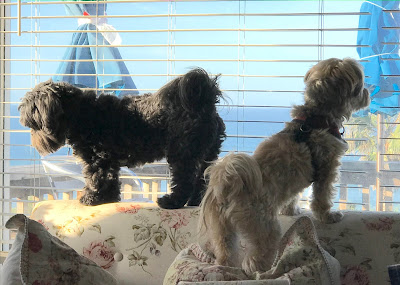 Sally sent pictures of Ginger and wrote, "...We had that terrible cold for 10 days straight... below zero every night and barely above during the day. I hope that is it for this winter. I really liked your last two blogs and share a lot of the same thoughts. I cannot wait to get back to some sort of normalcy.Your puppies are beautiful!!! I’m leaning towards a black and white if one appears when it’s my turn. They are so cute!!! I know at first I didn’t think I liked the color but I really do!!! I guess we’ll see !!!" 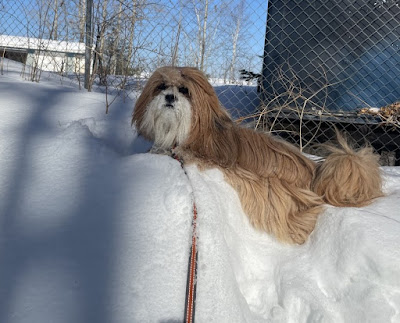 Another Plug For ALAC Membership

The American Lhasa Apso Club membership costs only $35 a year. If you love the breed and want to support the efforts of the club to help preserve the breed, it is a small price to pay. Yes, a lot of club efforts promote showing in conformation and participating in companion events like rally, obedience, and agility, but we have many members who don't do any of those things because they prefer their Lhasas just be loving companions. I'm the ALAC Membership Chair and would love to hear from you about joining the club. We have an associate membership which allows a member all club privileges except voting and using the club logo for advertising. All members receive a monthly online magazine called "ALAC Online" that contains ads about wins, articles of interest to the breed and about the breed, and club information. My email is joyslynslhasas@outlook.com. Email me if you would like a membership application.

One page of the February ALAC Online issue featured this Valentine, written by Muriel Hunt, that originally appeared in the February 1978 issue of Lhasa Tales. Valentine's Day may be over but we all still love our Lhasas, so I thought you might enjoy seeing it! 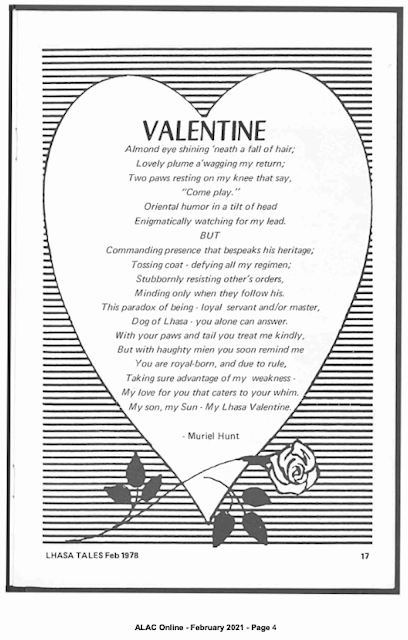 That's it for now!
Lhasa Good Wishes for a Healthy, Happy March!
Joyce