Puppy Pictures and Some Other Things

I'm starting with photos of the puppies this week since it seems that is what most people want to see. They are now five weeks old and getting cuter and more photogenic as they grow. They are investigating, trying to play with each other, sleeping frequently, eating from their mom's food dish (she doesn't mind), learning to use the piddle pads, and charming all who see them.


I usually have named them by now so we have call names and can identify them when we refer to them as individuals. I don't know if my muse is on vacation, but inspiration has not yet struck, so for a while yet, they remain nameless.

Photos of Joyslyn Dogs That Others Have Sent Me Recently

Pictured below are Brigsley, who will be two in January, and Snickers, who is 13. Miranda tells me they get along great. Both are dogs the family purchased from us. Cuties!
Another picture of Brigsley. He is Josh's litter brother. 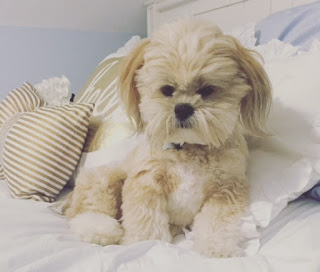 This is Luther. He is Kimmi's litter brother. A picture of their litter sister, Abby, was featured last week. Both Abby and Luther have that ornery look in their eye. Kimmi doesn't have that glint in her eyes. She fools us. She looks sweet and harmless but manages mischief. For example, two evenings ago while I was balancing my checkbook and focusing on the math, she managed to pull one of my husband's favorite DVD series off the shelf then proceeded to mangle the cover. She looked so innocent when the discovery was made. 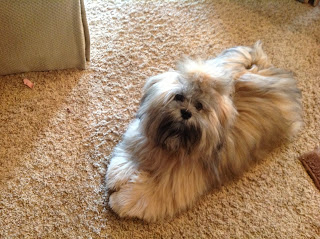 A few weeks ago I retold the story of how Joyslyn's Lhasa Apsos began. You might recall that I saw a photo of a Lhasa in an encyclopedia, became intrigued, and later saw a litter advertised, bought a female puppy, and a month later bought another female puppy. (Is one Lhasa ever enough? Evidently I did not think so!)

Well, I finally remembered to dig out that ancient encyclopedia and find the photo. I took a picture of it and here it is -- the photo that started us on our journey. 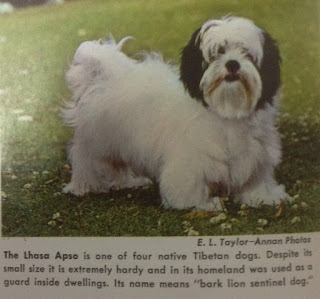 That's all for this week. Kimmi and I are preparing for her first point show this weekend. Ready or not, we'll be in the ring. Send positive thoughts our way. No pressure to win this weekend. I just want her to come away with a positive ring experience.