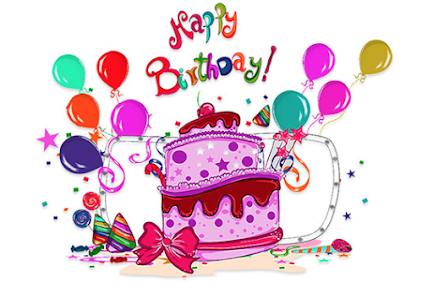 Yes! August 15 is my birthday! My family always made it a special day for me and that feeling has extended well into adulthood. I'm not saying how old I am but my age is now equal to the last two numbers of the year I graduated. The #1 song was "In The Year 2525!" 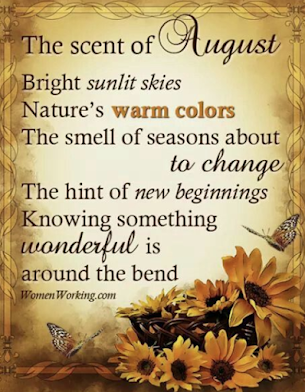 Work has been crazy because we hired a new employee and I have been spending extra hours at the office to help her become acclimated. Home has been crazy with puppies leaving, so I have put off writing the blog. However, now there are a lot of photos and notes to share from others, so we're going to get to it!

First, here are pictures of the Chance and Greta litter, at age 9 weeks. (They are now 10 weeks, but we haven't had time to take photos yet this week.) You will note some names have changed from the call names we gave them to the names the new owners chose for them.

This is Aspen - I think we have decided to keep her. 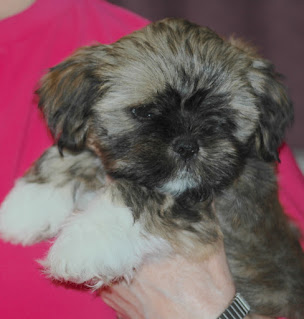 This is Beau. He has left for his new home. 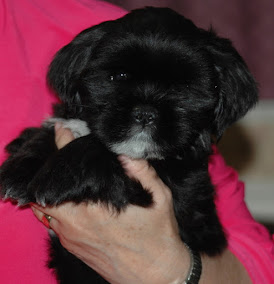 This is Jetta - now Daisy - She has left for her new home. 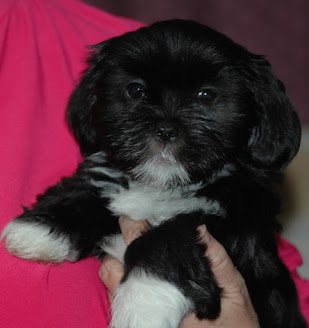 This is Lia - now Zoie - she has left for her new home. 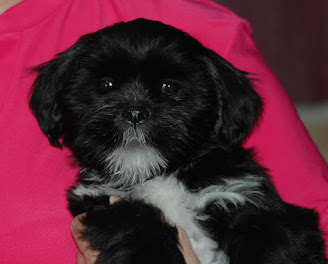 This is Willow, who is leaving for her new home next weekend. 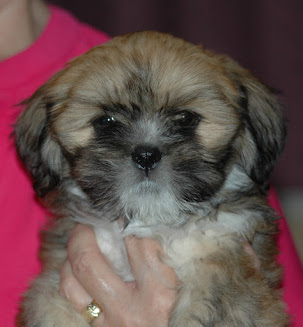 Yes! Things are getting a lot quieter and less hectic around here! I love the puppies and watching them through all their stages of growth, but there comes a time when they need to get away from their siblings and join a new family. 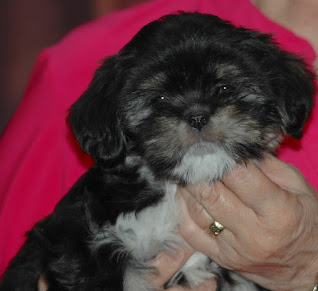 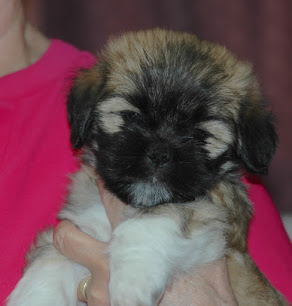 This is Little Joey 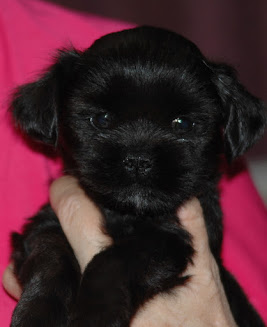 The first is from Kathy about Jampa, who had been suffering from a skin problem. She wrote, "He is acting much more like himself. He's playing more, barking more, and trying to "push us around" more!  When he wants to play, and wants me to join in, he will poke my leg with his nose.  If I don't respond, he pokes harder!   We have not been back to obedience classes for about 3 weeks, but, if he's still feeling good next week, I may take him.  He really likes class!  When we get out of the car, he's quick to potty and then tries to drag me to the door to go inside. :-)... Jampa's coat is still silvering out, but looks more "bronze" than silver in certain light.  The vet staff all adore him...and at my regular vets office the staff "sings" to him.  They said he is very well behaved!  Now that he's feeling better, I tend to be late for work - playing with my dog! :-)" 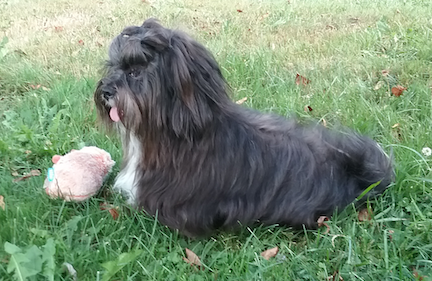 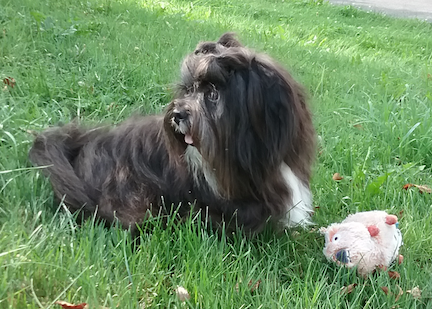 Rebecca wrote about Carso: "Carso has been keeping us busy in the most delightful way.  I’m sending along some photos of his adventures below - Carso goes with us wherever we go. He loves to snuggle on the couch or next to us while on car rides, and is such a sweet and gentle boy that we’ve never had an issue with him biting hands or playing too rough.  He is a little cautious with new people and dogs (as I know is normal for a Lhasa) but he goes to puppy day camp two to three times a week to socialize and that has made him more confident.  He is part of the small and floofy puppy gang at camp that includes a shih tzu and bichon bolognese (the “training” videos of that are hilarious) and he is also the camp’s social media mascot (he has many pics on their Instagram/Facebook - posted by the camp, not me :)...He also gets LOTS of attention from people who always ask what kind of dog he is. So, if you start seeing a huge demand for Lhasas from Maine and/or Georgia you’ll know you have Carso to thank for it.  We also met a woman last night who asked to pet Carso and told us that the mascot for her high school field hockey team was a Lhasa!  I wouldn’t be surprised if that is the only instance of a Lhasa sports team mascot." 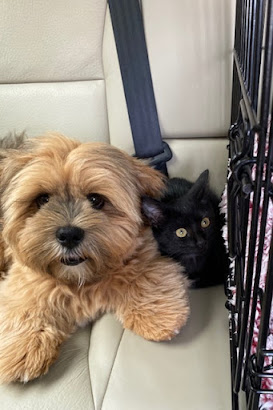 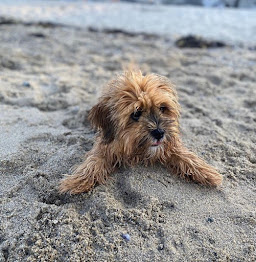 Michelle sent pictures of Sunny. She wrote, "We bought Sunny a Kong wobbler and he loves it! He has to get his food out of it, keeps him busy for awhile and he eats much better! He was worn out Saturday night after a busy day of boating and camping, he loves to snuggle and sleep with all his toys in the motor home!" 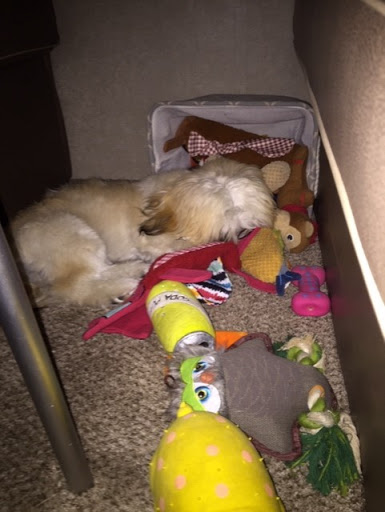 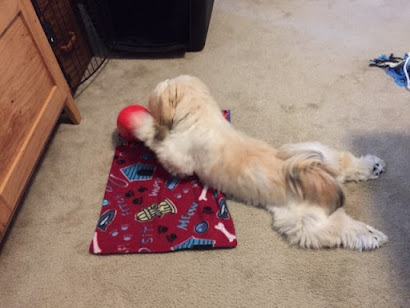 Like so many of the puppy buyers tell me, Sunny still likes to use the going-to-a-new-home blanket I send home with the puppies.

Here is a photo of Judy's Gus, as the desert wind blows through his hair. 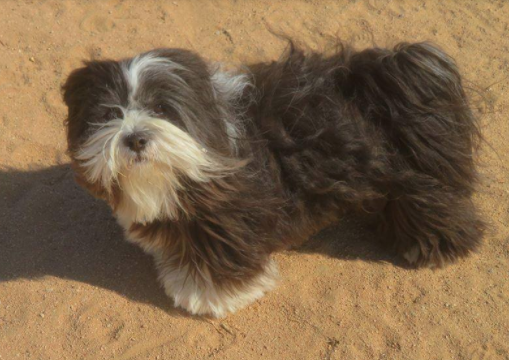 This is a photo of Joy's Lucy. Such a pretty face! 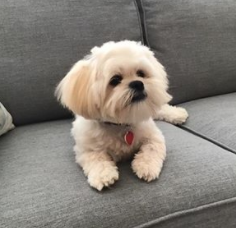 Debra sent a photo of Seng Kye on the occasion of his second birthday. 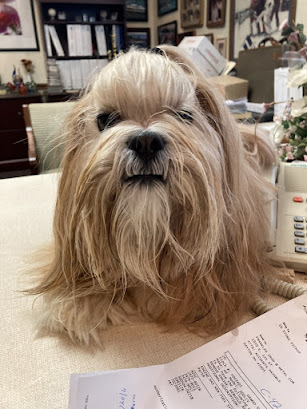 And Shannon sent photos of and wrote about Minnie: "I hope you are doing well! I wanted to reach out and share some photos of miss Minnie! She has grown SO much and keeps us laughing everyday! She loves chewing on people’s hair, giving kisses, and playing with ice cubes! And she hates vacuums, garage doors, and when I leave for work everyday! She has truly been such a joy and we love her to pieces! I can’t thank you enough for matching me with my sweet girl! " 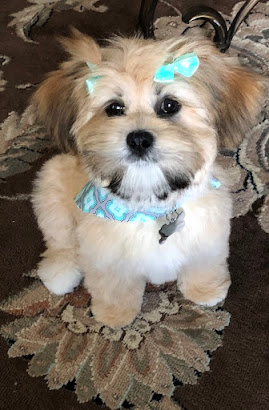 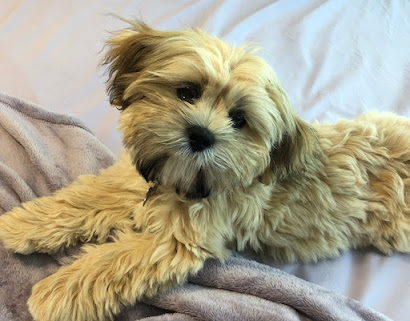 Judy sent an update to tell us how Zoie was doing in her new home. "I am attaching the AKC registration certificate.  Also, we took Zoie to the vet yesterday.  Everything is fine.  Everyone thinks she is the cutest ever...We have had so many firsts around here.  Zoie barked for real on Monday.  We have a step between the kitchen and living room and on Tuesday she went up and down that step with no problem.  She is a wonder!  If you need anything else from us right now, let us know.  She's snoozing right now.  She played so long that she had to relax.  Thanks again for everything."
Kathleen wrote about Beau: "We drove to our summer place and he was a great traveler.  He slept from 10 pm. last night until 6 am, a first.  He is the easiest pup I’ve ever had and doing well with potty training. I adore him and seems to feel the same about me. I will sent more photo of him at Madeline.  He has adapted to both homes easily. You can be very proud of him."
Julie wrote, "Hi Joyce,Thank you! We had a very pleasant ride home. Daisy is a joy!  She runs and plays and is very lovable. Peaches is still pretty much ignoring her, although we have caught a few brief periods of them running and chasing each other in the yard.

Daisy had her Vet check up yesterday and all was well. She took to our Vet immediately. She has met our neighbors and our son and she was loving and acceptable to all of them. She comes when calls. She has a little difficulty with bed time.  She cries for about a minute or two, but then settles herself.  She wakes up usually around 12-1 AM and again around 4.  She starts to cry, so we take her out to go to the bathroom, give her a treat, love her up a little and then put her back to bed, where she cries again for a couple minutes and then goes quiet. She has been very quiet, very little barking."

Thanks to all our puppy buyers who send photos and updates of their Joyslyn's Lhasas through various stages of their lives. I love hearing about the dogs and their activities and really enjoy sharing their photos.
Thanks also to all of you who take time to read the blog and keep up with all that is going on around here -- not much lately--COVID19 had made life rather dull.
I miss going to dog shows and can tell that the time away from shows and training classes has had a negative effect on my two show prospects, Millie and Archie. Both seem very noise sensitive and more wary of strange people and situations than they should be. It is so disappointing because Millie especially started out loving classes, and she was so ready to compete at the shows. Training classes have begun again, so I am hoping that they help the dogs prepare for going to shows in 2021.
Until next time! Stay safe, be well, wear a mask!!
Joyce