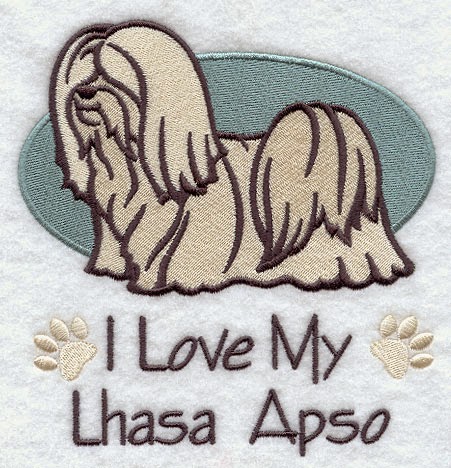 The puppies have grown. Here they are at almost 9 weeks old. The photos were taken after their first baths. They were surprisingly good. I'm usually prepared to get as wet as the puppies get during their baths, expecting some struggles and splashing around. Not one of them fussed. They all stood perfectly still and seemed to enjoy the experience. Even under the big blow dryer, they all were very cooperative.


Big congratulations go out to Helen and Sassy, Josh's litter sister. Sassy is now half-way to her championship with 8 points, including one of those highly sought after majors. Here is a photo of beautiful Sassy. She is a half-sister to the 9 week old puppies since Windy is also her mother.
Speaking of Josh, he and I are heading to four days of shows in Louisville, KY next week. It will be fun to be with Lhasa people at a show again. The entry is not huge, but that is par for the course lately. I am looking forward to presenting the American Lhasa Apso Club's Judges Education Seminar on Sunday. It's always a privilege to be able to tell prospective judges about our breed.

And, speaking of ALAC, the club has some nice things on its website now. One of the newer items is a short video of some of the dogs at the national specialty week last October. Josh and I made a quick appearance. Look for the woman wearing the pink jacket. And I saw the bottom of my dress in one picture when I was showing Bobbie's bitch, Lilly. The video is a quick one but it brought back some nice memories of that show week.

Also on ALAC's site for those of you interested in learning more about the Lhasa is "Learn About the Lhasa Apso," a presentation either in magazine format or pdf format. You can get to it by going to the ALAC website, lhasaapso.org, and highlighting "Breed Information" from the menu on the left.

Finally, under the "It's About Time" category, here is an article explaining what most of us already knew about the Humane Society of the United States. An excerpt reads, “The HSUS has historically bragged about their 4-star rating from Charity Navigator, one of the most trust-worthy charity evaluators in the game. Recently, they were downgraded to a 3-star rating and now their rating has been completely revoked, a “Donor Advisory” warning taking its place.” As the article points out, your money is better spent by donating to your local shelter.

Enjoy the rest of your week.