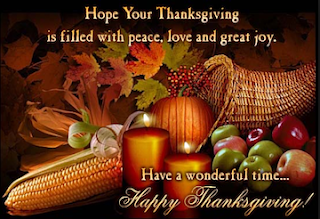 "Saying thank you and being thankful are two very different things. The former is part of being mannerly, the latter - well, it's the secret to a life of happiness and success." ~ Deborah Norville

May your lives be blessed with peace, happiness, and love as we begin the holiday season. When you count your blessings, I hope there is a Lhasa Apso whose name is on your list.


Life is Better When You Have a Lhasa to Love You!

Updates and Some Photos 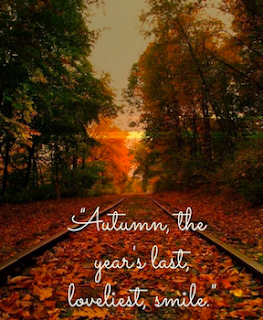 Last time I wrote the focus was on the preparations for the national specialty and some of the highlights for us while we were there.

My life is not all dogs and dog shows, so between going to shows and grooming and training the dogs, my life revolves around family and work. Home from the national for four days, I packed my bags and went to the Illinois Early Childhood Conference "Sharing A Vision" for two days. I learned a lot about children's challenging behaviors, children and physical activity, and children and music, to mention only a few.

Shortly after I wrote the last blog post, I was again preparing for a dog show, this one in Winona, WI, a place I had never been. The drive was long but scenic. The show was held at an equestrian center. We groomed in horse stalls and showed on a packed dirt arena -- another new experience (not the horse stalls, the dirt floor). Jenna took Winners Bitch on Sunday so now needs only two single points for her championship. She has a very slow growing coat, something I am not used to and am really aggravated about. She totally blew it all when she went through her puppy coat change last fall and it has been so very slow in growing back, as you can see from this photo. I think God is trying to teach me patience! Seriously, I have been thinking about giving up on her and then think, "But we just need two single points!" 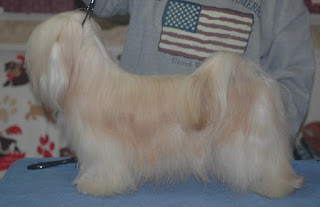 Home from the show, I had two days to do laundry, groom dogs, go to the office, and unpack and repack, this time for another two-day trip to Chicago for work. Happily, this time I did not have to drive. I took the train.

The official show photos from the National Specialty came back from the photographer. I know I posted them last time with writing across them but here they are again sans the photographer's mark.

I am posting the photo of Josh but it is not one of my favorite photos of him. 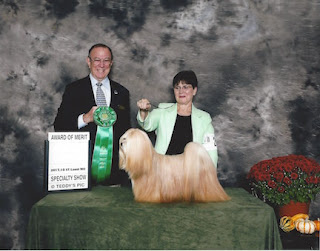 Here is a photo of him while he was being judged. This photo was taken by Ronnie Crowder.
Then I found the following photos of Josh that I did not recall seeing before. These were taken at a different show but I thought they were good of him and wanted to share. 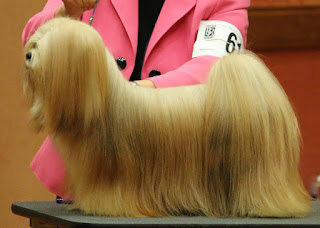 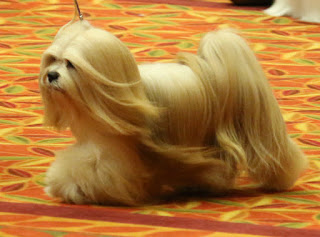 Josh is now "retired" for at least a year. He has been shown since he was 4 months old. He will be 4 in January and I thought it was time he took a break. He did well for himself this past year, ending the year as #5 Owner-Handled Lhasa in the country and, as of the Canine Chronicle statistics through October 31, as #10 Lhasa Apso in the Breed Standings. He received his invitation to the AKC National in Orlando, but we are not going to go. I don't have the energy or the money to attend this year.

Yesterday we took pictures of Bekka who is now 3 months old. She is learning to be a show girl. She is doing well stacking on the table and letting me see her bite. Lead breaking is so-so. She is walking but not too happy about it. 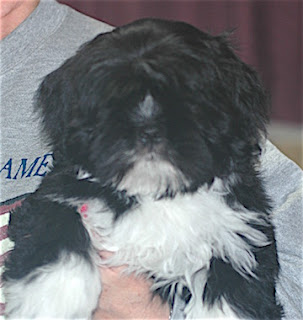 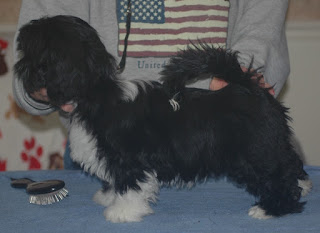 We also kept her brother, whom we call Chance, but lately I have been thinking of re-naming him because I keep calling him Chase. We'll see... Anyway, he was not home to have his photo taken. He is on "vacation" at Mary's house in Iowa. I often tell people who want to buy siblings that it is not a good idea because they tend to bond with each other and rely on each other instead of on their people. Not being one to take my own advice (!!), I decided to keep both Chance and Bekka because I could not decide between the two of them. So, guess what is happening?? Mary visited recently and I asked if she would take Chance home with her for a week or so. She agreed. Mary wrote saying, "Sam is in seventh heaven with the pup. She snuggled over and laid her head next to the pup. He bounds through the grass with me like he's half bunny. He is such a lover. I can tell why he is your favorite." Mary is working with him on the table and the lead, as I am with Bekka.

I love hearing from those who have purchased our puppies and love it even more when they send photos. Here are some notes and pictures I've received lately.

From Renee: "just wanted to let u know we had to put my beautiful Namri down in late August, 4 days after we moved into our new home in Solana Beach. It was, of course, a very painful experience, but our wonderful vet assured us it was time. Among other things, he was suffering from dementia. I will forever be grateful for his companionship and love over the last 16+ years and he will live on in our hearts. I’ve never been loved better. Will forward some recent photos from the La Playa Trail in San Diego Harbor, which was his favorite place in the world. Dalai was noticeably depressed for a couple months and was always lying in Namri’s bed, but is doing better now and back to rough housing with Jet."
From Diane and Tom:  "Just wanted to wish you both a Happy Thanksgiving. I've included a picture of Kuper after his first grooming appointment. I'm sure he was a handful since he's always in constant motion. He's doing well in his puppy class and never fails to provide a few chuckles to other puppy parents. I've noticed in play groups he is immediately drawn to black puppies and runs over to check them out. We are certainly happy (thanks to you) that we have a Lhasa to love!"
You may recall that I previously wrote about Penny's bad experience after having a vaccination containing Lepto. Diane and Tom wrote about their experience: "I wanted to share with you our experience with immunizing Kuper. When Tom took Kuper for his 1st vet visit as per your contract, he told either the vet or vet tech that we did not want the lepto vaccine to be given. He was told that it was entered in Kuper's chart. We needed to take Kuper in for the bordatella immunization and they told us he could also receive his distemper at the same time. An appt was scheduled for bordatella and Distemper. Tom took Kuper in and the vet saw him again and gave the immunizations. After getting home he realized that they charged for DHLPP series as well as Corona vaccine and the bordetella. To say the least, we were upset!  After a call to the office, we were simply told if Kuper had any side effects he could be seen in the emergency clinic nearby.
We felt we had informed them and had scheduled appt for the specific immunization we wanted Kuper to receive. However, we learned the hard way that we also need to question what they have in hand when they come in the room. Kuper had no initial reaction. We do feel he has been scratching the site of the injections, which could be side effect. I share this in hopes of preventing further puppies and owners from this experience. We will, in the future, ask to see the label on the vaccine before they give it. I also plan to get the list of mandatory vaccines as additional ones were given without our knowledge. We will be changing vet office and have interest in a holistic vet that has concerns about vaccines and vaccine dosing for small puppies."

Lori wrote, "Finn is just the best little guy ever...Still has all his sweet puppy charm, though. He starts every day with kisses and a big, squeaky yawn. He's a happy little fellow, always wagging his tail. And he has the funniest voice -- he "talks" more than he barks, it's just hilarious! ...Finn has such a cool, laid-back personality and he deferred to Emma right away. Such a good fit. So much fun to watch them play together. We're starting puppy obedience class next Sunday. I'll let you know how he does Love him SO much,
P.S. I always figure a dog is truly part of the family when he has multiple names. That said, Finn also goes by Finnegan, Mr. Finn, Little Chap, Young Sir, Finnamon, Finnegar, Finnster, etc."

From Marilyn: "Hey Joyce, I wanted to send this pic of 2 friends just chillin after a game of 'You chase me, then I’ll chase you!'”
From Jennifer: "I have a picture of Grace in the truck on her first trip. She is doing pretty good overall when we are out on the road. I know that she gets cabin fever a bit. I try to find places that are big enough to play ball, she's very good at chasing it down and bringing it back. I'm impressed that such a young dog would do that. She is a bit of a wild child and very stubborn. Potty training is going slow but I am not pushing too hard because she has to learn in the house and truck. She still will not walk with me with the leash, I can hold it and go where she wants to but she digs her toes in and refused to go where I want to. She is learning to sit and down with no problems. She loves meeting people and dogs. So no problems with socializing. Still loves the cat. You have to put stuff up high because she can jump like a rabbit. My mother doesn't call me anymore, she just texts and wants more pictures of Grace…There are a thousand things I would tell you about Grace and I know you have heard them all from puppy parents. I going to end this by saying I still absolutely love Grace from nose to tail to her furry little toes."


Violet sends frequent updates about their Shadow. Here he is taking a nap. Violet says he sleeps on his back like that a lot. 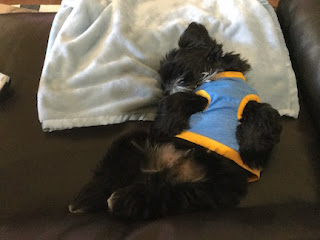