What's Been Going On

It has been a while since I've posted. I apologize for that, but life has a habit of getting in the way of my good intentions. So today's post will be one to catch you up on what's been going on.

The primary focus this past week has been family. My mom's 77th birthday was Tuesday so I traveled to Nebraska to help her celebrate. The trip generally takes 8.5 hours or so but the above-speed-limit traffic on Iowa's stretch of I-80 reduced the trip time by quite a bit. Hey...I was just keeping up with traffic!!

We had a surprise lined up for Mom and it went as planned. In June of 2008, my daughter and her boyfriend moved to Miami. She's a labor and delivery nurse. He is a resident (ear-nose-throat). They decided to come to Nebraska as a surprise and, even though everyone except Mom knew about it, nobody let anything slip. Mom was totally shocked and so very happy to see the kids! I was also...even though I visited them in Miami in July. I miss my daughter so much and it was great to see her again.

I totally blew my diet. Mom's great home cooking and all the desserts laying around whispering my name created havoc with my eating habits. I decided to go with the flow, yield to temptation, and get back on track this week.

On Friday, we drove from my hometown to David City, Nebraska, where we'd lived for 16 years. I taught English at Aquinas High School in David City and had been back for short visits only a couple times in the past 20 years since we moved to Macomb. On our way to Omaha to the airport, we stopped in David City to visit friends. Among them was our next door neighbor who was not only a wonderful friend but also the daycare provider for all three of my kids, as well as the godmother of my youngest. We also met my daughter's godmother, who was a close friend and colleague when I was teaching at Aquinas and now is principal of the grade school. She took us to the high school so I could meet the few people whom I taught with who are still there as well as see some former students who are now teachers there. One of them grabbed my hand and looked at my fingernails. She wanted to make sure that I'd kept them long as she remembered them. She said she recalled my habit of rolling a pen or piece of chalk between my hands as I lectured and the clicking sound it made against my rings. She said she catches herself doing that sometimes! Oh dear. I had no idea I did that! My classroom is now a computer lab and the school building has 3 new additions. The school has a really cool construction program. The students actually build a house that is then auctioned off. They build all the cabinets and everything. I was impressed. The instructor told us that for the last few years the house has been purchased before the students started building so no auction was necessary. The students involved in that project are learning great skills!

Saturday the kids flew back to Miami, and I drove home with a couple stops along the way for shopping at malls in Iowa. I seldom get out of town except for a dog show and then shopping is not possible because the weather is always too hot or too cold to leave the dogs in the car for long, and the hotels generally do not want dogs left alone in the room, even if they are crated. I hit some good sales and came home with a bunch of clothes that will be fun to wear.

On the home front, Lynn was busy while I was away. He and our oldest son tiled the floor of the dogs' room. It looks great! I really appreciated all their hard work! To tell the truth, I'd been doing a lot of nagging about it lately!! In July 2008, we had a contractor pour a new concrete floor for the dogs' room. The next month we bought the tiles, which have been SITTING in those boxes since then! It was time to get the job done!

This week's challenge will be getting the dogs ready for a show on Sunday. All three (Breaker, Mira, and Belle) are entered. There is a major so we could come home with a new champion if things go well. Keep your fingers crossed for us!!

I've also got to start getting things packed and ready for the trip to the Lhasa specialty in PA. We'll be leaving on October 11. As fast as the days are flying by, it will be here before I know it. I organize by list...and my list is getting very very long!

I'm also setting up the whelping pen for Dancer. I want her to get used to being in it so it becomes "home" for her while she is waiting for the puppies to be born. I admit that I'm having serious doubts about a pregnancy. She just is not "showing" as much as I think she should be for as far along as she is. Perhaps the litter will be a small one. I'll be so disappointed if we don't have puppies. I've waited so long for this litter! But I'm not giving up...time will tell!

Life is good when you have a Lhasa (and a great family) to love you! 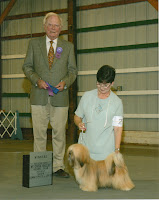 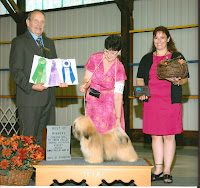 Breaker's pictures from the Twin Cities Lhasa Apso Club specialty and the St. Croix Valley Kennel Club shows have arrived. I'm so proud of him.

The training classes for Breaker seem to be working. He has not been shying away from the trainers and has actually been wagging his tail when he sees them coming. The big test of course will be at the show on October 4. If the planets line up correctly, he'll be perfect on the table and sail around the ring like a true showman. I also have to say, "If I am not so nervous that I make the dog crazy..." Whatever...it'll be what it is, and we'll go from there.

Mira's been getting a workout too. I've changed her lead and she is learning NOT to toss her head back and look straight at the ceiling when I have her stacked on the floor! I just hope she remembers her lessons on October 4! I want to bring home a new champion!

We will not talk about Belle, who is in season and miserable. She would not walk before and she is not about to do it now. So there, thank you very much. Enough said!

In the meantime, we are hoping that in mid-October there will be babies in the litter basket! Dancer feels "full" so I'm hoping she has puppies. I guess I could have an ultrasound done to see for sure, but since there is no huge need to know at this point, I'll just wait. We generally have an x-ray done a few days before the due date so we can count puppies and know what to expect. I can wait until then. Sadly, I'll miss the whelping. Dancer's due date is smack in the middle of ALAC's national specialty week, and I'll be in PA. Thank goodness Lynn is accustomed to whelping puppies. He stays calm and cool. I totally trust him to do a good job helping Dancer bring her babies into the world.

Joyce
Posted by Joyce at 1:16 PM No comments: 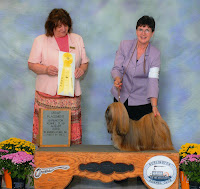 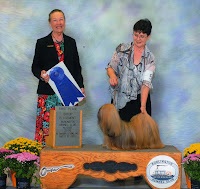 Walker's photos came this weekend and I am happy to share them with you! It was nice to see the photos and re-live the fun and excitement of those wins!

It seems the only person Belle wants to walk with is our 3-year-old granddaughter! Belle is now 8.5 months old, and I am at my wit's end with her. Nothing I try seems to work and the Klara option is out at shows!! I guess Belle will come around in her own time – or not. Lately you hear me moaning, "Why can't things be easy?" (Hear the tiny violins playing in the background.) She is looking cute. She has a lot of coat, like her mom and her grandpa Walker. See the photo.

Mira and Breaker are headed to class tonight. They have a show coming up in early October and, after his less-than-stellar performance on the table and her antics at the last show (except she is good on the table!), it's time for class. We have three classes we can attend, one in Peoria on Tuesdays, one in Moline on Wednesdays, and one in Davenport on Thursdays. The only problem is that each is at least 1.5 hours away! It's nice to have options so the dogs experience different environments and different "judges" to examine them.

Presently, we are waiting to determine if our Dancer is pregnant. We have not had puppies since Belle was born in December last year, and Dancer's breeding to Ch. Karlyn's How Do You Like Me Now ("Alvin") has been long anticipated. She was due in season in March and did not come in until August 1. My dogs have a habit of doing things when they feel like it I guess!

I received a call Sunday from Davy's new owner who said things were going great and that Davy was such a loving and playful dog. They are having a lot of fun getting to know each other. I'm so glad Davy is happy … oh, and the new owner too!