"The world would be a nicer place if everyone had the ability to love as unconditionally as a dog.”
~ M.K. Clinton

This post may become too long to appreciate. I found myself taking notes over the last few days regarding things I'd like to share. I guess if I get tired of typing, I'll stop and save some of those topics for another day.

A super-aggravating thing that happened this past week was that the Firefox technology gremlins attacked both my home and office computers when I updated to the latest version. On almost every website, the gremlins removed every lower case x and lower case y from words containing them. Eventually, I had to say goodbye to Firefox because even the tech people at the university where I work could not figure out what was going on. I moved to Chrome.

As I wrote last week, Autumn's show career has ended. This is the last official show photo that was taken of her on the day she earned the last of the points needed for her Grand Championship. She is now known as GCH CH Joyslyn's Wind Song. We'll still be taking the usual portrait photos of her; afterwards, that pretty coat will be clipped (once I can bring myself to do it). It's always a hard choice because of all the time it took to make it look so pretty over the months she was being shown. 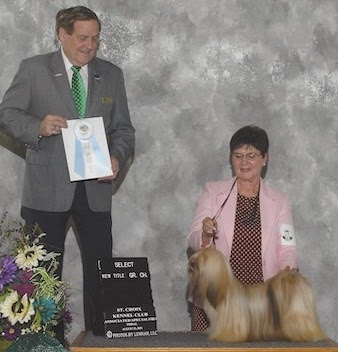 In the last post, I mentioned that Winter's litter brother, Nelson, finished his championship at age 7 months, winning multiple majors. Here is a photo of his win at the Twin Cities Lhasa Apso Club's August Specialty Show. 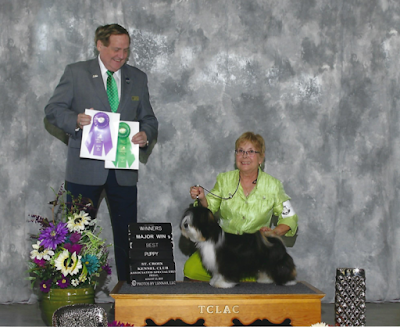 If you are a regular reader of the blog, you have seen photos I have posted of Chance, CH Joyslyn's Moon Shadows as he matured and earned point needed for his championship. You also know that we occasionally sell our retired champions to pet homes.

Chance left here for his new home on September 1. Here are some photos of him in his new home.

Judy, who owns Chance's nephew, Gus, wrote, "He looks like a happy puppy, but in reality, he is much more happy and joyful than I can capture in a photo. I've never known such a joyful puppy or dog."


Mickey, owner of Chance's half-sister, Biddy, wrote, "I just read your blog. They are fun to read.  I really like seeing all the dogs, yours and others. Biddy has had a busy summer visiting all of her doggie friends. We have finally been home for the past few weeks after a hectic summer of taking short trips. Biddy goes to stay with one of our kids while we are gone. The G-kiddos fight over who is going to watch her. I think I have mentioned both our kids have big dogs & she can control them, especially both of my daughter's big dogs. My daughter's dog always want to head outdoors when Biddy comes to stay to get away from her. Biddy can't go out with them because she can escape through the metal fencing.  Well, she sits by the sliding door waiting for them. If they go to the door & see her they head back to the yard. Well, Biddy figured this out & started sitting where they couldn't see her. She is so funny. You talked about how Autumn gets so excited when she sees the travel gear coming out. I am sending you a picture of Biddy sitting next to her travel gear. She lays by the kennel as soon as I take it out waiting to go. But she is really happy to see us when we pick her up."

Stephanie wrote on behalf of Addison: "Joyce, I got my very first haircut yesterday. My groomer said I was the best girl ever! I let her pamper me without being fussy. Here is a picture!! Always, Addison" Stephanie later added, "She loves being brushed. Her groomer said she just sat there and enjoyed being pampered. She does wonderful at the vet also. She's over 7 pounds already. She truly is a sweetheart. Please know she is loved dearly!!"


From Violet about Shadow, who happens to be Chance's littermate brother: "Shadow would come out from under my bed, wanted to come up on the bed. I pick him up to do so, he then would fall sound asleep on my bed for hours." 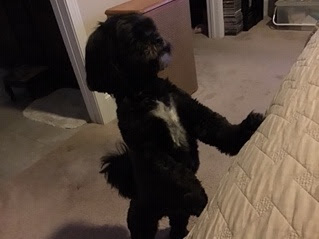 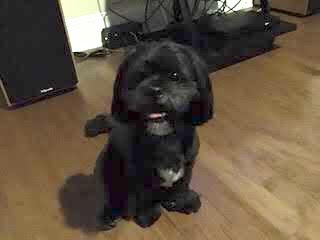 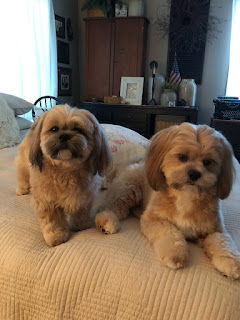 Lisa sent a photo of 1-year-old Molly and said, "She weighs 10 lbs and plays constantly."
Molly and Chance are 1/2 siblings. Luna is mom to both. 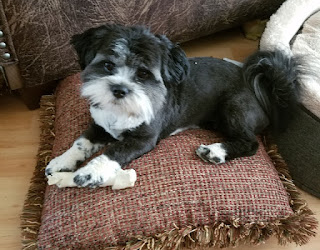 From Sue about Chewy: "He loves cuddling but he can’t get off the couch. It’s kind of nice.. like a playpen. I put him up there and he stays there until I come and get him. He finally figured out the stairs last night but he runs up them like crazy and dashes through the door. Thank heavens we left it open or he would have crashed into it. But he’s pottying great and loves walks. We were playing this morning and I threw him his brown crackling toy and he would fetch it and come running to jump into my lap and hand it to me. Sooo cute, but then when I threw it down again LOL he couldn’t get it until I put him down…Thank you for this little treasure…"
Sue asked for information about trimming Chewy’s headfall so she could see his eyes. Here is a link to an article I wrote that could help others who have a similar need.

I am a worrier. It is true, especially I worry when I sell my adults to pet homes. I've told their new owners many times that I must sound like a mom sending her son on his first overnight at someone else's house and praying he remembers his manners. I try to be proactive and think of every little thing. It's true too when I sell a puppy to a new home--as many of you who are reading this probably know. Then I sound like a new mother who is leaving her baby with a sitter for the first time. I keep thinking of things you should know or do and send a lot of information. (I know some of you just smile, ignore it, and don't tell me! LOL! Thanks for being kind.)

One thing I fret about is resource guarding, especially when the adult (or puppy) is going to a home where there is already another dog in the family. So here is information I gathered about resource guarding.

My professional career, which began as a high school English teacher then, for the last thirty years somehow morphed into directing early childhood professional development providers, has led me to learning a lot of things about toddlers' and other young children's thinking about sharing. So for this blog, I used the Toddler's Rules and came up with something similar for Lhasa adults and puppies.

Lhasas, no matter what age, are similar to toddlers when it comes to possessions.

You’ll find a lot of resources and articles about resource guarding on the internet. Here are links to a some articles that explain it and what to do about it.

Most articles refer to the dog guarding his food and toys from people. What I want to focus on is the guarding that takes place in a multi-dog family. It is important to be aware that it happens, especially if you are adding an adult dog or even a new puppy to your canine family. Puppies can be especially problematic because they have no manners yet and think the world and everything and everyone in it is theirs.

Think about it from your current dog’s point of view: to this point everything in the house has been his/hers - the food, the toys, the treats, the attention, etc. Then the new dog/puppy comes in, not knowing "the rules." Jealously and resource guarding may result.

One way to reduce resource guarding over food is to make sure the dogs are fed separately - in different rooms or individual crates. Pick up any uneaten food - and even empty food bowls.

When people come to me for a puppy, one of the questions I ask is if they have other pets and, if so, what kind? If  there is another dog, resource guarding could be a problem. With that in mind, I always recommend that the dogs be fed separately as a way to deter resource guarding.

Okay, I have reached the "I'm tired of typing point."